Georgians in Abkhazia and South Ossetia unable to vote 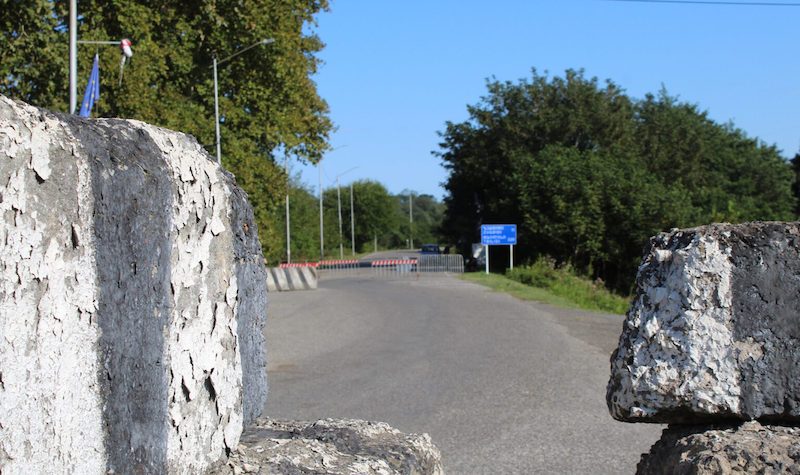 Closed bridge over the Enguri River, which marks the boundary between Abkhazia and territory controlled by the Georgian government. Photo (c): Lana Kokaia / On.ge. Used with permission.

This article originally appeared in English on OC Media, which translated the original Georgian-language text from the news website On.ge. It is republished here with permission, edited in accordance with GV house style.

Rezo (name changed) lives in the Gali District of eastern Abkhazia. He would like to vote in the upcoming Georgian elections, but the checkpoint is closed due to the COVID-19 pandemic leaving him unable to cross the border. He plans to cross it illegally, even though it can put his life in danger.

On.ge can’t reveal the respondent’s name, age, or the village he lives in due to security concerns.

Rezo says that he has been participating in Georgian elections since the country’s independence and it would upset him a lot if he failed to do so this year. However, the checkpoint on the Enguri bridge — the only crossing between Abkhazia and the territory controlled by the Georgian government — has been closed for the past nine months.

“I will be very disappointed if I won’t be able to vote. I’m planning to make it anyway. We used to vote with the entire family before. I think that voting is my duty as a citizen”, he says.

Residents of the Gali District aren’t able to vote in Abkhazian elections either. The Abkhazian government considers the participation of Georgian citizens in their elections threatening and has barred them from voting entirely.

Nona and Guram (names changed), the residents of the village of Saberio in the Gali District, last time voted in the 2018 Georgian presidential election. They left their daily activities and travelled from Saberio to Tsalenjikha, across the River Enguri, to vote. This year they know that they won’t be able to use their right to vote because the Enguri bridge is closed.

“The majority of the residents of the Gali District participated in the [2018] election. At least 70–80 percent. We used to go there, as often as we could, but now we can’t even buy food and clothes because the road is closed”, Nona says.

Ethnic Georgians from the town of Akhalgori in South Ossetia haven’t been able to cross into Georgia-controlled territory for more than one year.

Akaki (name changed), 71, from Akhalgori remembers that people used to actively vote in previous elections, but this year they lost all their hopes and they are just looking forward to the road reopening one day.

“We used to take a minibus and return the same day. It was good. Now we are locked up like prisoners. We cannot go anywhere, what can we do? We can’t do anything, we are just staying alive”, says Akaki, who lives in Akhalgori with his wife.

Manana (name changed), 65, from Akhalgori says that their major dream now is to have the possibility of free movement. She suffers from thyroid disorder and cardiovascular disease, which is why she used to go to Georgian clinics a lot, but now she hasn’t been able to get quality medical service for more than a year.

“Probably, I’ve been to Tskhinvali [the capital of South Ossetia] a few times. We, the locals, would usually go to eastern Georgia. My grandchild is in Tbilisi. Our life gets worse and worse and I don’t know how much longer we will survive like this. We miss our relatives and friends”, she says.

“Young people used to illegally cross in on the election day if they didn’t have a permit or the border was closed. Now I don’t know how it will be”, she added.

Tamara Mearakishvili, a journalist and activist based in Akhalgori, says that she would go to the elections herself if she had an opportunity. She tells On.ge that Akhalgori residents were actively voting when there was freedom of movement.

“During the parliamentary elections in 2016, a lot of minibuses full of people went there. They would always go. Because of not having my documents [to cross the border due to an ongoing court case], I was unable to vote. People from here would say: Ossetians may close the roads for the election day, let’s go the day before. And so they would go the previous day to vote”, Tamara says.

According to the Abkhazian Statistics Committee, in 2019 there were 46,905 ethnic Georgians living in Abkhazia, of which 30,268 lived in Gali.

Georgians are the second biggest ethnic group living in Abkhazia after the Abkhaz and make up for over 19 percent of the population, followed by Armenians and Russians.

The website of South Ossetia’s statistics service doesn’t have information on demographics. Nugzar Tinikashvili, mayor of Akhalgori, told On.ge that there are about 1,300 Georgians living in Akhalgori now.

The Democracy Research Institute (DRI), Georgia-based NGO which studies the human rights situation in the disputed territories, has reported that the number of people leaving Akhalgori has been on the rise. According to them, the difficult situation in Akhalgori and Gali in terms of human rights is difficult. They call for the Georgian government to protect its citizens’ right to vote.

Ucha Nanuashvili, DRI’s director told On.ge that the quarantine restrictions should be at least temporarily eased and they should place an election precinct on the Enguri bridge with security and sanitary rules followed.

“Thousands of votes cannot be lost. Thus, it is important for the government to take timely steps in order to achieve a concrete result. Akhalgori is in a far more difficult situation. Unlike Gali, it has few residents. As for Abkhazia, this issue is possible to be discussed in a dialog with [the authorities in] Abkhazia”, Nanuashvili says.

Tbilisi doesn’t have any plan to protect the right of vote of Georgians living in Gali and Akhalgori. On.ge contacted the Ministry of Reconciliation and Civil Equality about this issue. They responded that this issue was not their competence and redirected us to the Tbilisi-based Autonomous Government of Abkhazia. They, in turn, redirected us to the Central Election Commission, which also told us that this issue was beyond their authority.

Except being unable to vote in the elections, Georgians of Akhalgori and Gali have a lot of other problems: they don’t have access to quality medical services and they have to pay twice as much for medicines and essentials as people living in the territory under the control of the Georgian government. They don’t have an opportunity to visit their relatives at hospitals, or see their families and relatives at all — for almost a year.

The Enguri bridge has been closed because of the pandemic, however the reason behind the closure of the South Ossetia checkpoint was political. South Ossetian President Anatoly Bibilov says that the checkpoint won’t be opened unless Georgia removes a police checkpoint near the village of Chorchana erected during the increased border tensions in August 2019.

Tamar Mearakishvili told On.ge that South Ossetia granted passports and pensions of 300 Lari (US$93) for people who depend on Georgian pension, but are unable to travel to collect it. She said this decision by Bibilov came into force in December 2019 and affected about 200 pensioners.

Abkhazia opened the Enguri bridge for the Gali pensioners on 16 October for three days a week, so they can collect their pension from a bank minibus located right across the bridge. They are allowed on the bridge only to collect pension and they cannot buy anything in nearby shops.

DRI has assessed the situation in Gali and Akhalgori as catastrophic. Ucha Nanuashvili says that COVID-19 made the human rights situation of the people there ‘extremely grave’.

For ease of reading, OC Media chooses not to use qualifiers such as ‘de facto’, ‘unrecognised’, or ‘partially recognised’ when discussing institutions or political positions within Abkhazia, Nagorno-Karabakh, and South Ossetia. This does not imply an editorial position from Global Voices on their status.