246 protests in 62 provinces over the last three months 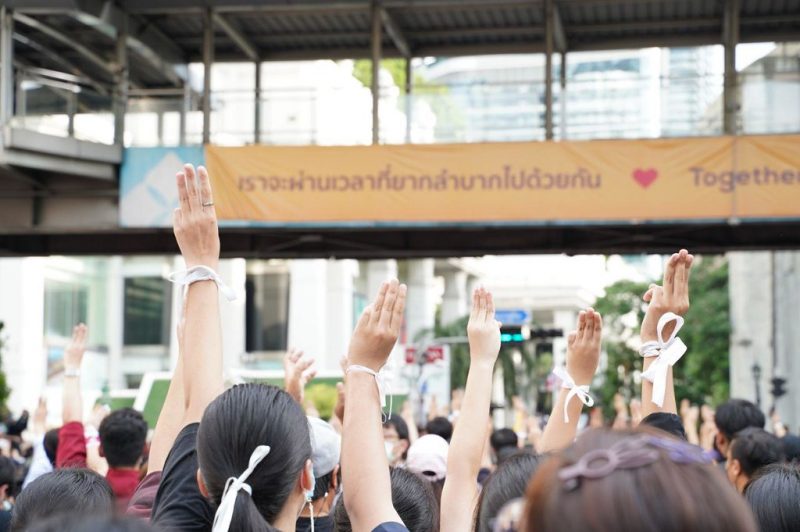 This article by Sek Sophal originally appeared in Coconet, a platform for digital rights movement-building in the Asia-Pacific, hosted by EngageMedia, a non-profit media, technology and culture organization. An edited version is published below as part of a content-sharing agreement with Global Voices.

In Thailand, the youth-led pro-democracy movement is showing no signs of retreating, despite a State of Emergency banning public gatherings of more than four people. In response, the Thai government issued an order on October 16 banning four independent media outlets and a Facebook page from posting news content, based on the pretext that these organizations posed a major threat to national security. The groups in question are Voice TV, Prachatai, The Reporters, and The Standard, as well as the Facebook page of the Free Youth movement. The decree was signed by National Police Chief, Suwat Jangyodsuk, at the request of the National Broadcasting and Telecommunications Commission and the Digital Economy and Society.

The ban on these groups has since been lifted, following an October 21 order by the Criminal Court. The Court cited Section 35 (1) and (2) of the Constitution, which state that “a media professional shall enjoy the liberty to present news or express opinions in accordance with professional ethics,” and that “the closure of a newspaper or other mass media in deprivation of the liberty under paragraph one shall not be permitted.”

The government’s decision to even attempt this ban was both misguided and counterproductive. If the Thai government believed that banning the four media houses would have stopped or weakened the ongoing protests, it was sorely mistaken.

Long before the current protests, Voice TV, Prachathai, The Reporters, and The Standard had played a critical role in generating comprehensive and independent media content for the Thai public. And with their consistently high-quality content, professionalism, and code of ethics, the popularity of these media organizations has only increased. For instance, the YouTube channel of Voice TV surged to over two million subscribers during its coverage of the protests, making it currently one of the most popular news media outlets in the country.

If the intent of the Thai government was to stop news of the protests from spreading, it seems that the Emergency decree was the wrong choice of strategy. Even though many Thai youths depend on these independent media outlets, several more online platforms are also producing the same kind of independent content. In addition, such content is also produced and shared on other channels of communication, such as on messaging applications Telegram, Line, and Signal.

Equally important, as well, is the fact that, while protesters rely mainly on media and other forms of communication to mobilize, these organizations have nothing to do with the students’ communication, coordination, and management of the protests. The young protesters have become tactical in terms of organizational structure, information dissemination, time management, and protest management because of the advantages of using social media platforms. For example, the protests of October 14 to 21 at Ratchaprasong, Pathum Wan, Lat Phrao, and the Asok intersection in Bangkok and in other provinces clearly demonstrate how efficiently the students organized, coordinated, managed and controlled the protests. To manoeuvre the security forces, for instance, no information related to time and place of the protest is available until the last hour. Moreover, the protests take place simultaneously in several places within a specific period of time. The protests on Sunday, October 18, for instance, took place in different places in Bangkok and 12 provinces nationwide. To avoid unnecessary clashes with security forces, the protest leaders quickly adjourn the protests and demobilize people, while the security forces are on their way to the protest site.

Prime Minister Prayut Chan-o-cha—who swept to power by a military coup in May 2014—is known in Thailand as not being friendly to independent media. As the protests against his government kept growing, the decision to ban the four independent media houses was nothing but another sign of policy failure and inability to handle the situation in which the legitimate power to rule was being questioned.

In fact, this move could fuel further protests. Since October 13, there have been daily protests in Bangkok, largely due to ongoing arrests of some protest leaders and daily intimidation and harassment of people by the Thai authorities. That day, the police had arrested 21 people, including protest leader Jatuphat “Pai Dao Din” Boonpattararaksa. The following day, thousands of students mobilized and marched to the Government House to protest against the government and demand the release of their detained colleagues.

There have been 246 protests in 62 provinces over the last three months. As the protests continue, the number of people jailed by the government skyrocketed right after the October 15 announcement of the emergency decree. According to the Thai lawyers for Human Rights (TLHR), the government arrested no fewer than 81 people between October 13 to 18. TLHR also reports that at least 65 people are facing charges for their roles in the protests, added to 145 cases of alleged harassment committed by the Thai security forces. It seems that the more the government arrests protesters, the more the protests expand in size.

General Prayut is very powerful to even attempt to cut a flowering tree. He can even order his tank brigade to destroy the entire garden—but, he might not be powerful enough to stop spring from coming. The end of Prayut’s government is no longer a remote possibility.