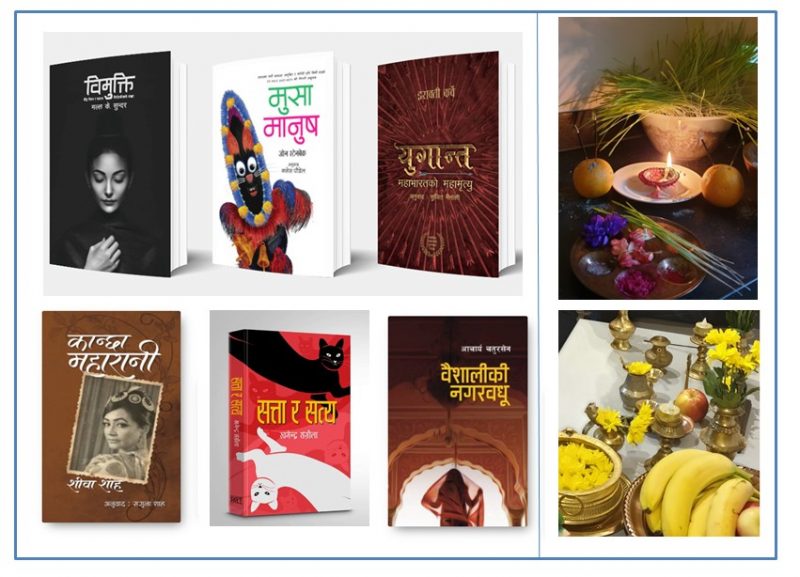 Dashain, also known as Vijaya Dashami, is one of the largest Hindu festivals celebrated in Nepal. It is a time when Kathmandu and other densely populated cities are emptied of residents who flock to their home villages. Typical ways of celebrating Dashain in Nepal are buying new clothes, rejoicing with varieties of food, visiting temples, spending time with family, whereas book lovers are also seen buying new books. Every year, publishers print new books and hold major book fairs and festivals around Dashain.

Although COVID-19 disrupted many of this year's festivities, many Nepalis were seen celebrating Dashain in various ways. Book lovers, for example, shared their new book purchases on social media:

Dashain is always incomplete without Nepali literature. Some new ones have been bought, some are yet to be bought.

Nepalis living abroad are also celebrating Dashain festival. “I plan to read a few new Nepali books I have recently collected as part of my Dashain celebration with books,” Krishna Bajgai, a Nepali writer living in the United Kingdom, told Global Voices via telephone. He adds: “Dashain is all about nice food, new clothes, bringing something new for the home, enjoying with family and for a writer, what else can bring joy other than new books? Dashain is all around!”

The Nepali book market has seen many new publications this Dashain festival, including new translations.

Book Hill, a Nepali publisher, released this year translations of “Uganta: The End of an Epoch,” written in English by Iravati Karve, the first Indian female anthropologist; John Steinback's “Of Mice and Men,” the first-ever translation of this book in Nepali; and of “Wa Lampusthva Pala,” by Nepalese author Malla K. Sundar, originally written in Nepal Bhasha.

Though the book market has been slow for the past couple of months due to the pandemic, people in Nepal seem enthusiastic about buying new books this Dashain. The book “Satta ra Satya” released just two weeks ago is going for the second edition as the it sold much quicker than expected.

Another publisher who released new titles lately is Shangrila Books, among them “Kancha Maharani” by Nepali author Sheeba Shah. The novel was translated into Nepali by Saguna Shah.

We are getting a very good response to this novel right at the festive time. This has brought joy to us. Getting reviews from the readers that the translated literature has maintained the originality and standard of its English publication, this is simply great.

I am very excited to see the love this translated book is getting from the readers. There is another translated book in the pipeline and we look forward to bringing more books in Nepali translation.

Publishers are also making efforts to sell the rights of Nepali books translated into English in the international market, but still, the challenges with distribution and marketing are immense. Mahesh Paudyal, a writer and researcher from Nepal, told Global Voices: