Internet throttling, SMS blocking in days leading up to election in Tanzania 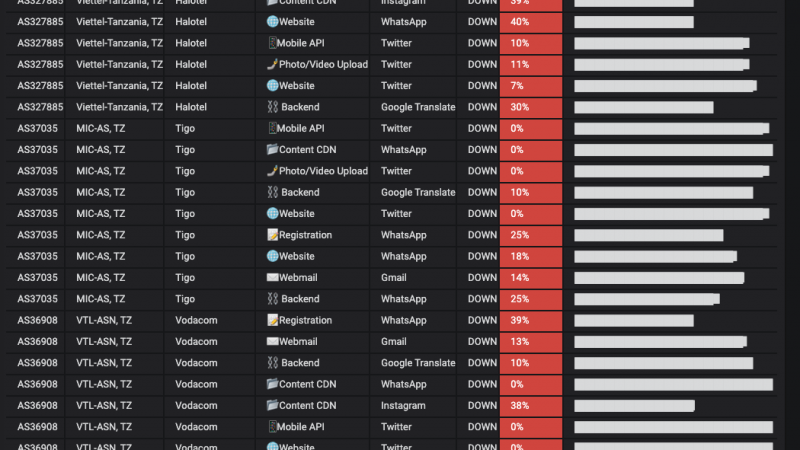 Back in August, digital rights activists speculated that Tanzania may restrict internet services  — especially popular social media platforms — ahead of the general elections scheduled for October 28.

Sure enough, with just 24 hours to go before election day, internet users in Tanzania and on the semi-autonomous islands of Zanzibar, have reported limited access to internet services including social media platforms such as WhatsApp, Facebook and Twitter.

On election eve, Netblocks confirmed the intentional slowing down of the internet known as “throttling”:

The limited services left millions without reliable internet to communicate with friends and family, and grappling to secure virtual private networks (VPNs) to access the internet:

Tuno Nassoro implored TCRA not to switch off the internet:

The internet has started to become troublesome for close to a week now. Please @TCRA_TZ we beg you, do not switch off the internet. We have many important communications and there is another life that follows after tomorrow.

Ahead of tomorrow's election in #Tanzania, we're seeing some blocking and throttling of Twitter. #TanzaniaDecides2020

Internet shutdowns are hugely harmful, and violate basic human rights and the principles of the #OpenInternet #KeepItOn https://t.co/Q2SJfsFUiD

According to Paradigm Initiative, the Tanzanian government does not have the authority to fully shut down the internet. But the Electronic and Postal Communications (Online Content) Regulations, 2020, “gives the Tanzania Communications Regulatory Authority (TCRA) power to order service providers to block or filter content if the TCRA deems such content is prohibited,” according to human rights lawyer Daniel Marari.

On October 21, the TCRA instructed telecommunications companies to “suspend bulk SMS and bulk voice calls” for a two-week period that coincides with the general election, allegedly censoring keywords and names of certain opposition candidates:

The letter, signed by Eng Jame Kilaba, the TCRA's director-general, said that the “continuation of services during the electoral period is likely going to jeopardize the security and safety of the country,” according to The Observer.

Access Now called this a “severe breach of human rights”:

The election is this Wednesday.

People will not be able to communicate. This is a severe breach of human rights. #KeepitOn

Ahead of general elections tomorrow, the Zaina Foundation has monitored the potential for an internet shutdown in Tanzania since April, and have launched a Twitter campaign called #KeepItOnTz.

The move to limit internet services in Tanzania is part of a larger trend across Africa where governments choose to interfere with users’ rights to freedom of expression — particularly during events of major political significance.