The cross-movement influence is a two-way street 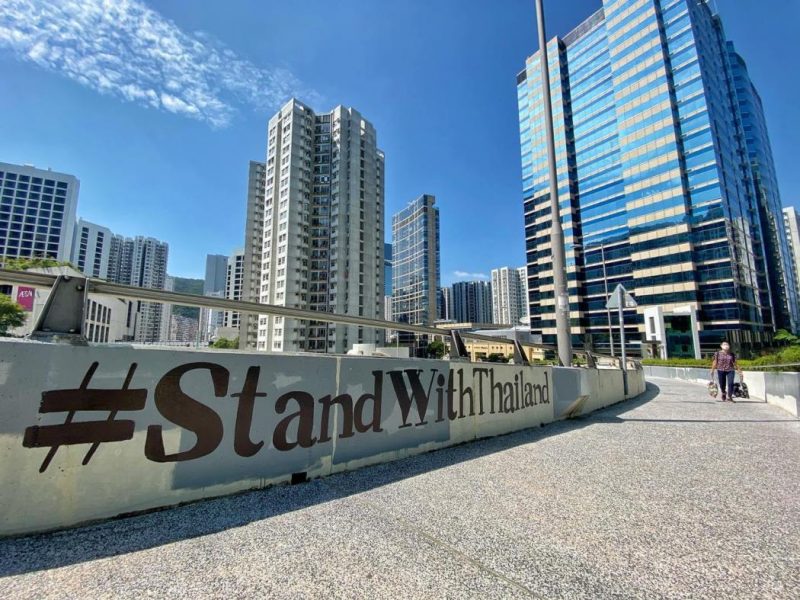 The following post, written by Shui-yin Sharon Yam, Assistant Professor of Writing, Rhetoric and Digital Studies at the University of Kentucky, was originally published on Hong Kong Free Press on October 22, 2020. It is republished with the author's permission on Global Voices under a content partnership agreement.

Since the passing of the national security law, the streets of Hong Kong have been eerily calm. Large-scale marches and guerrilla-style street protests are no longer a weekly sight. Although some Western pundits and expats were quick to declare that Hong Kong and its pro-democracy movement is dead, not only does Hongkongers’ spirit of resistance live on, but it has taken on a transnational orientation as they advocate for protesters across the world — most recently in Belarus, where thousands have been protesting election results, and in Thailand, where there is growing dissatisfaction with the monarchy.

Since their own 2019 protests began, Hongkongers have experienced more than a year of heartbreak, trauma and violence inflicted by a government and police force that cannot be held accountable — but as grassroots uprisings spread across the world since the advent of the COVID-19 pandemic, their experience with resistance has given rise to a new wave of transnational solidarity. As Hongkongers watch protest footage abroad that echoes their own, they feel a visceral connection and kinship with activists facing similar obstacles.

Like Hong Kong's anti-extradition protests, these global grassroots movements are mostly decentralised and youth-led, and make use of digital technologies and guerrilla street tactics to challenge authoritarian governments. Most importantly, taking the lead from Hong Kong protesters who challenge Beijing’s governance, they also seek to dismantle longstanding systems of power and by doing so, uncover the state’s willingness to inflict violence on its people, squelch dissent and restore the status quo.

Common across all these movements are state regimes that monopolise power and are eager to invoke states of emergency and implement draconian laws to criminalise protesters. Mirroring some aspects of the Carrie Lam administration, the Thai government recently declared a state of emergency and implemented a ban on gatherings in response to ongoing protests against the monarchy and military rule.

Around the time that Beijing announced the national security law, the Duterte regime in the Philippines implemented a sweeping anti-terrorism law with similar chilling effects. The solidarity Hongkongers feel with movements abroad is therefore based on the shared struggle against authoritarian state governments and militarised police forces that do not hesitate to inflict bodily and emotional harm on its own citizens.

Given these similarities, journalists and commentators have written extensively about how the Hong Kong protests emboldened the Bruce Lee-inspired “Be water!” tactics around the world. Cautioning against a callous dismissal of the Hong Kong movement as a failure, Jeffrey Wasserstrom, an American historian of modern China, recently wrote:

The city’s latest struggles added significantly to the global repertoire of resistance.

The cross-movement influence between Hong Kong and elsewhere is a two-way street. While the 2019 Hong Kong protests have influenced organisational and protest tactics in anti-authoritarian movements abroad, the current wave of grassroots uprisings also prompts Hongkongers to develop a transnational understanding of grassroots activism and solidarity.

While Hongkongers have previously focused on lobbying powerful Western governments for support, they have since expanded their transnational advocacy to grassroots movements that challenge state regimes. It is an important shift, as this transnational advocacy – which has moved online — highlights how their own struggle is interlinked across movements, despite geographical distance and historical differences.

During the Hong Kong protests, people made effective use of digital technologies to circumvent surveillance, circulate information and advocate for their five demands.

Now, as the protests in Belarus and Thailand intensify, Hongkongers are once again making use of social media platforms to demonstrate transnational solidarity. In addition to retweeting posts from Belarusian and Thai protesters and journalists, Hong Kong Twitter users have also shared protest tactics and translated information about these protests into Chinese, in order to reach a broader audience.

In late September, a Hong Kong illustrator started an art campaign on Twitter, challenging Hongkongers to co-create a painted human chain connecting the two locales and movements. Under the hashtag #HK2Belarus, original artwork and photo collages demonstrate Hongkongers’ support for Belarusians as they challenge the Lukashenko regime:

Any HKers want to do an art challenge to show solidarity to Belarusians from Sep 20-26？? pic.twitter.com/V642Q9r3Zg

Meanwhile, as the #MilkTeaAlliance morphed from a sarcastic Internet meme to a symbol of transnational anti-authoritarian struggles, Hong Kong netizens shared footage and messages from Thai protesters on Twitter to amplify their voices. Using the hashtags #StandWithThailand and #WhatIsHappeninginThailand, the Instagram platform @hkpostmanchannel collected over 300 messages of support from Hongkongers to Thai protesters.

Dissent ‘not limited to digital spaces’

While these actions are most visible on social media platforms where Hongkongers can protect their identity, they are not limited to digital spaces:

We, Hongkongers, have faced endless political persecution in the year-long ongoing protest. The fight for democracy is a collective battle, and we stand with our fellows in #MilkTeaAlliance. pic.twitter.com/eSj6MlEVKx

Prominent pro-democracy activists and lawmakers such as Joshua Wong, Ted Hui and Figo Chan held up a bilingual banner outside the Thai Consulate in Hong Kong to condemn violence against Thai protesters. Overnight, graffiti materialised on a traffic bridge in Tai Koo: “#StandWithThailand #Save12HKYouths.” Even more courageously, a representative from grassroots advocacy group Student Politicism made a public speech in Mong Kok, urging Hongkongers to support grassroots activists in Xinjiang, Belarus, and Thailand:

I hope we Hongkongers can expand our vision and support beyond our local struggle. When we were protesting, Thai people supported us not because they were obligated to. I hope that now when they are facing authoritarian suppression, we will support them too.

Echoing this sentiment, political commentator Kevin Yam reminded Hongkongers that while it is tempting to continuously highlight similarities between the Hong Kong and Thai protests, it is important to keep the focus on the struggles and courage of the Thai people.

These recent expressions of transnational solidarity emphasise mutual support with other protesters as co-strugglers against authoritarianism. This orientation decentres traditional power structures by connecting directly with other grassroots activists, instead of with state governments that are often complicit in oppression.

Protesters in Thailand and Belarus have responded in kind, chanting slogans and holding unfurled flags in solidarity with the Hong Kong movement that is no longer permitted under the national security law. As activists around the world challenge the status quo and strive to dismantle unjust political structures, Hongkongers’ new transnational orientation guarantees them a seat at the table as activists worldwide imagine and create new political futures.