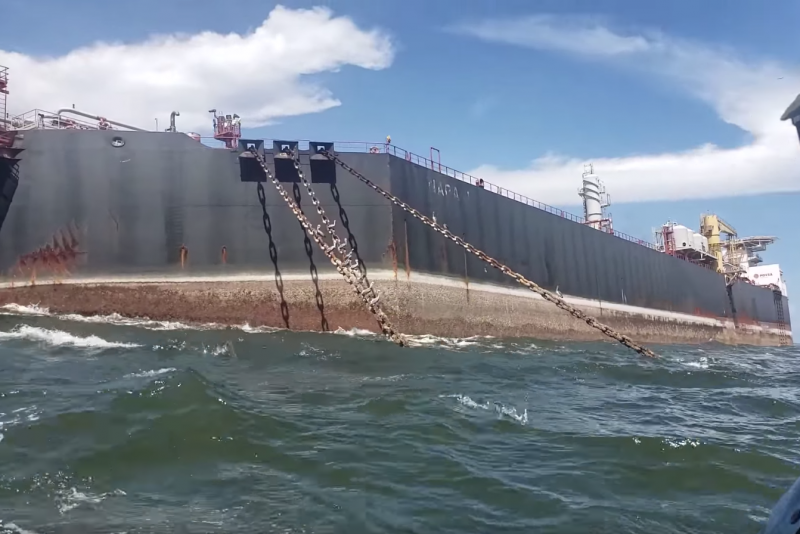 The FSO (Floating Storage and Offloading Unit) Nabarima, the vessel in danger of sinking and creating a huge oil spill in the Gulf of Paria. Screenshot taken from a video uploaded by Fishermen and Friends of the Sea, the Trinidad and Tobago-based non-governmental organisation that raised the alarm about the situation.

This article was originally published on Cari-Bois News. An edited and updated version is republished here as part of a content sharing agreement with Global Voices.

The first non-Venezuelan-led assessment of the status of the FSO Nabarima, a Venezuelan oil tanker sinking in the Gulf of Paria in the Caribbean Sea, confirmed that the risk of an oil spill is minimal.

The assessment was conducted on October 20 by a team of experts from Trinidad and Tobago recommended by the country's Ministry of Energy and Industries. Trinidad and Tobago would potentially experience the worst effects should such an oil spill take place.

There have been regional and international concerns in the past months about the potential ecological disaster posed by the damaged vessel, which remains stranded in Venezuelan waters near Trinidad carrying approximately 1.3 million barrels of crude oil.

Trinidad and Tobago's Minister of Energy Franklin Khan said on October 22 that the report's findings “confirmed that the vessel is upright, it is stable and there is very little minimal if any risk of tilting or sinking.” The full report was due to be released on October 22 but prior to this, Khan said the conclusions were as follows:

The FSO Nabarima is upright and stable with no visible tilt and there is no imminent risk of tilting or sinking. There was no water egress visible on the vessel to the team, it was confirmed that during the incident when the engine room was flooded, as was reported in September, there was no mixing of oil and bilge water, the oil did not leak from the containment tank. This implies that the double hulls are intact and poses minimum risk of an oil spill at this time.

The team was reportedly satisfied with the vessel's ongoing maintenance programme and recommended a follow-up visit in a month.

On October 16, environmental activist Gary Aboud, of the Trinidad and Tobago-based non-governmental organisation (NGO) Fishermen and Friends of the Sea (FFOS), conducted a clandestine visit to the vessel, showing that it was tilting precariously. This was two months after Aboud first sounded the alarm about the potential for a devastating oil spill to occur in the Gulf.

Trinidad and Tobago's government has since found itself grappling with difficult questions about how to respond to a crisis beyond its maritime border. Amery Browne, Trinidad and Tobago's Minister of Foreign and Caribbean Community (CARICOM) Affairs, sought to provide clarity on the government's attempts to address the situation, as Aboud and other environmental activists have accused local officials of inaction and of toeing the line of the Venezuelan government:

There seemed to be an expectation in some quarters that the government, because of the concern, must act through some kind of illegal means. That simply is not possible.

Press releases from several Trinidad and Tobago government ministries over the past three months have deferred to Venezuelan talking points that the vessel is “stable” — a claim that FFOS deemed “propaganda.”

Browne insisted, however, that the government has taken the threat seriously from the very beginning, and that it immediately made a request via diplomatic channels to visit the vessel despite reassurances from the Venezuelan government that there was no cause for concern. He added that a visit had initially been approved for September 28 before suddenly being cancelled by Venezuelan authorities due to “circumstances beyond their control.” The new suggested date was October 20, at which point Browne said:

We immediately got back to them and we informed them that we would not wish to wait until October; we want to do an immediate fly-by or sail around of the vessel at least to be able to lay eyes on the situation, to get an idea of the tilt […] or any of the other parameters so that we know if this is an unfolding environmental emergency. Venezuela responded that they would not be able to facilitate that.

Aboud and other concerned citizens are questioning why this information had been kept out of the public domain until now.

Trinidad and Tobago shares a treaty with Venezuela on the delimitation of marine and submarine areas in the Gulf of Paria, which requires that both parties “inform each other about any indication of actual, imminent or potential pollution of a serious nature which occurs in the maritime frontier zone.”

Trinidad and Tobago, however, is among a small group of nations in the Community of Latin American and Caribbean States (CELAC) states whose government has given little public consideration to signing the Escazú Agreement — a groundbreaking treaty that deepens the link between environmental protection and human rights in Latin America and the Caribbean.

Ratifying the Escazú Agreement, which is one signature short of coming into effect, would help to guarantee the public’s right to information on environmental threats such as the one the FSO Nabarima poses.

Echoing the spirit of the Escazú Agreement, Aboud, in a video uploaded to Facebook October 20, says that given the potential for an oil spill to affect the entire Caribbean, the current crisis calls for a united regional response:

Five of the seven of the world’s marine turtles live in our Caribbean sea and each island has a tourism product that depends on whales, on dolphins, on fish, on crabs, on a clean and healthy sea.

He called for a binding agreement among all CARICOM members that would allow regional nations to pool information, resources and human capital to address shared threats.

Since Aboud’s visit to the damaged vessel, the United States Embassy in Trinidad and Tobago issued a statement in support of “immediate actions to bring the Nabarima up to international safety standards and avoid possible environmental harm” and making it clear that “activities to avert an ecological disaster” would not be in contravention of any sanctions imposed against Venezuela.

Recent international reports have stated that Venezuela’s state-owned oil company, Petróleos de Venezuela (PVDSA), has been positioning a crude tanker to participate in the unloading of oil from the FSO Nabarima. A person familiar with the matter told Reuters that PDVSA planned to offload some of the crude onboard via a ship-to-ship transfer.

Minister Khan confirmed that PDVSA began a ship-to-ship transfer of the crude to its Aframax ship, Icaro, but said that the Trinidad and Tobago report recommended that the transfer of oil from be done using a larger vessel, since the Icaro can only hold a quarter of the Nabarima’s 1.3 million barrel capacity.

Meanwhile, in a separate interview with the Trinidad Express, Browne credited “the strong concern and interest of the people of Trinidad and Tobago to the Nabarima situation” for helping to encourage the government to pursue solutions.