Another victory for the pro-democracy protesters 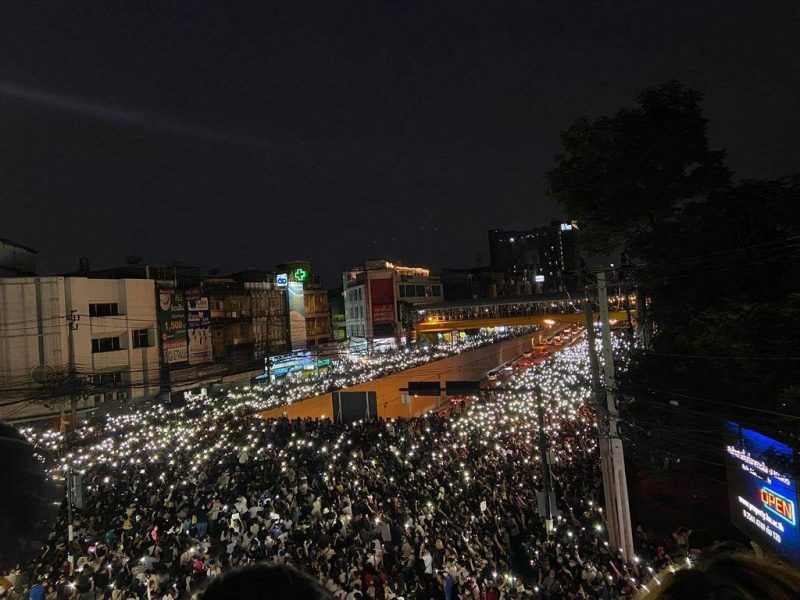 A pro-democracy protest on October 19 at Kasetsart intersection was held despite the prohibition on mass gatherings. Photo by Prachatai. Used with permission.

Thai Prime Minister Prayut Chan-o-cha lifted the severe state of emergency on October 22, according to the Royal Gazette.

The state of emergency, which began on October 16, imposed restrictions on Bangkok and surrounding areas. They included a ban on public gatherings of more than five people, a ban on reporting information that threatened public stability, and control over transportation and access to certain buildings, in accordance with the Prime Minister’s orders.

The severe state of emergency was described as an “emergency in an emergency” due to the pre-existing use of the Emergency Decree in response to the coronavirus outbreak which the government extended for the 7th time until the end of November.

Protesters have been gathering on the streets of Bangkok and other provinces every day since October 14, demanding the resignation of Prayut, constitutional amendments, and monarchy reform.

The latest state of emergency decree was expected to continue until November, and its reversal is a victory for pro-democracy protesters who defied the annoucement for six straight days

Yesterday, Prayut gave a speech asking all groups to take one step back and told the protesters to rely on the parliamentary process to get things done. On October 20, the Cabinet approved a special session of parliament for a debate on October 26 to 27.

The anti-dictatorship protest on October 14 was part of an expected response after parliament postponed debate on constitutional amendments for 30 days on September 24, disappointing the protesters demonstrating in front of the parliament on that day.

The government claimed that the severe state of emergency was announced because of illegal protests in violation of the public assembly law, and specifically pointed to an incident where a royal motorcade passed through a protest site.

Three protesters, Ekkachai Hongkangwan, Boonkueanoon Paothong, and Suranat Paenprasoet, have been charged with allegedly harming the Queen’s liberty under the scarcely used Section 110 of the Criminal Code, which carries a penalty of “imprisonment for life or imprisonment of sixteen to twenty years.”

However, the government failed to demonize the protesters as public opinion largely did not believe that the protesters intended to harm the Queen. According to many media reports from the scene, the protesters actually opened a path for the royal motorcade to pass through.

In defiance of the government’s restrictions, the protestors gathered again on October 16. The government made the decision to disperse the peaceful protesters using water cannons with dye and a chemical irritant. The protesters, which included students, remained nonviolent, leading to criticism of the government for its excessively harsh measures, and provoking even more protesters to come onto the streets.

The government tried to control the narrative again by ordering the closure of media outlets which had given extensive coverage to the protests, including Voice TV, Prachatai, the Reporters, and the Standard. Their attempt backfired as the protesters continued the demonstrations and now included a demand for a free press. The court ordered the lifting of restrictions on the press on October 21. 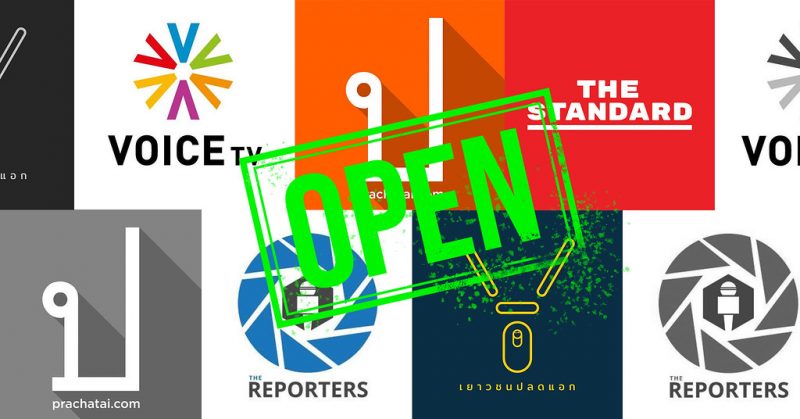 The court ordered the lifting of media restrictions on October 21. Photo from Prachatai. Used with permission.

Leaked documents confirm that the government-sponsored the pro-monarchy gatherings by “inviting” people to join. Some reluctant volunteers defied orders by showing the three-finger symbol while wearing a yellow shirt.

To date, a majority of the protestors’ demands remain unmet, with major political parties insisting that they will not include monarchy reform in their agenda, and the government arresting anyone it can identify as a protest leader.