As war in Nagorno-Karabakh rages, so does a pandemic

If the fighting continues, COVID-19 cases could surge dramatically 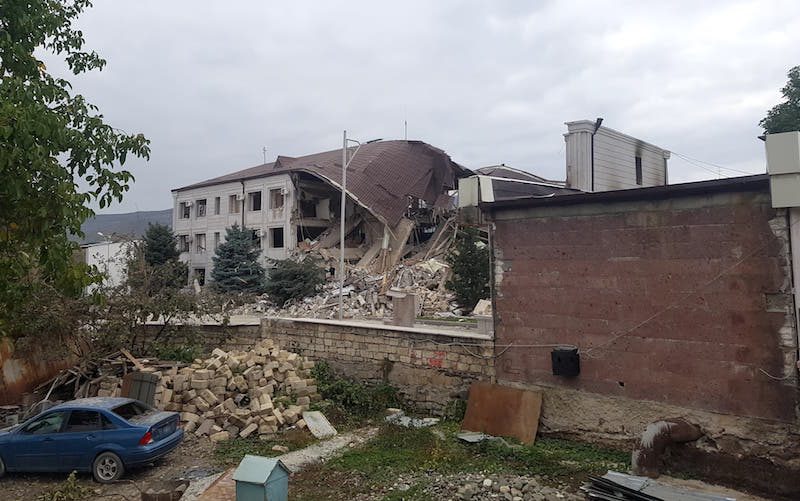 Nobody can self-isolate in a warzone.

And a warzone is exactly what Nagorno-Karabakh has become. On September 27, heavy fighting broke out amid an attempt by Azerbaijan to recapture the South Caucasus territory. The ongoing war is now the most serious violence since 1994, when a brittle ceasefire left Nagorno-Karabakh under the control of ethnic Armenian forces as a de-facto state. Although Nagorno-Karabakh is unrecognised by Armenia, Yerevan provides extensive military and economic support, and most residents of the region are Armenian citizens.

The Azerbaijani armed forces have bombarded the capital Stepanakert with artillery, drones, and according to a recent Human Rights Watch (HRW) report, cluster munitions. Civilian casualties have been reported in the city, many of whose 55,000 inhabitants have fled to neighbouring Armenia. Those who remain must take shelter in bomb shelters and basements. There has also been disruption to the city's electricity supply.

So far, two Russian-brokered humanitarian ceasefires have collapsed. Azerbaijani armed forces have made rapid gains in the south of Nagorno-Karabakh, along the Iranian border. At the time of writing, Azerbaijani soldiers are a matter of kilometres from the main transport artery between Nagorno-Karabakh and Armenia, known as the Lachin Corridor.

As fighting continues, the question is now not whether Karabakh faces a humanitarian crisis, but how it can be averted. This war is being fought in the shadow of a pandemic — COVID-19 looms over an internationally unrecognised state, nearly severed from its only link to external support, as winter approaches.

The last figures from the de-facto Ministry of Healthcare of Nagorno-Karabakh were quoted by Armenian investigative website Hetq on September 26, the day before hostilities began. It stated that there were 421 recorded COVID-19 cases in the territory. That week, Armenian-language media also reported that Nagorno-Karabakh had recorded 12 new COVID-19 cases in a single day; already a large spike for the territory of 140,000.

It appears that the healthcare authorities have not released new COVID-19 statistics since the war began.

Global Voices attempted to contact the Nagorno-Karabakh Ministry of Healthcare without success. However, on October 22, de-facto Healthcare Minister Ararat Ohanjanyan told the Associated Press that many doctors and nurses in Karabakh had known that they were infected but kept quiet about it. “We didn't have time to track down those infected while Stepanakert came under heavy shelling, and that allowed contagion to spread,” said Ohanjanyan, who himself continues to work despite having tested positive for the virus.

Effectively fighting a pandemic while attempting to survive a war may be nearly impossible. According to a EuroNews report from October 21, some COVID-19 patients in Stepanakert have had to take shelter from bombs alongside everybody else, increasing the risk of infection.

“Objectively and subjectively, nobody can pay enough attention to the preventative measures,” explained Karabakh's Human Rights Ombudsman Artak Beglaryan in a telephone conversation.

Lika Zakaryan, a Stepanakert-based journalist, put it more bluntly in an online exchange with Global Voices. “Nobody cares about COVID-19 right now. Many people are probably infected, as we have war wounded in the hospitals,” said the reporter for CivilNet, an Armenian online publication.

Zakaryan added that to her knowledge most hospitals in Nagorno-Karabakh, including the general hospital in Stepanakert, are functioning. Mher Musaelyan, a medical clinic director at Stepanakert's Republican General Hospital, confirmed to Global Voices in a telephone conversation that he was not aware of any large-scale monitoring of the COVID-19 infection rate. “Our main task right now is to care for the wounded,” explained Dr. Musaelyan, who stressed that doctors would still do their best to care for anybody presenting COVID-19 symptoms.

However, some medical infrastructure has been damaged and disrupted by shelling. For example, though it is likely that the territory's largest hospitals have their own small generators, an Azerbaijani attack on Stepanakert's main power station resulted in the city losing electricity on October 3. On October 14, photos emerged showing the bombing of a hospital in the fiercely contested town of Martakert, in what Armenian officials say was a deliberate attack, which their Azerbaijani counterparts denied.

This war comes alongside a surge in COVID-19 cases across the entire South Caucasus.

Armenia was initially the hardest hit. On October 22, public media reported a rise of 2,306 COVID-19 cases in a single day — the worst since the country's epidemic began in March. Yet there is no good news from Azerbaijan; on October 21 Baku reported a record daily number of 825 COVID-19 cases.

Given this sharp rise in infections, Armenian officials now doubt that their beleaguered healthcare system will be able to cope with extra demand. And that demand is substantial, for the war has already led thousands of Armenians from Nagorno-Karabakh to flee into southern Armenia. Beglaryan estimates that up to 60 percent of the territory's population has already been displaced.

“Our healthcare system may soon collapse if the situation continues as such, and we might soon not be able to hospitalise severe [COVID-19] cases. We currently have 2,000 patients in hospitals,” warned the epidemiologist Lusine Paronyan in a press conference on October 22. Paronyan, who leads the Armenian Ministry of Healthcare's National Centre for Disease Control, added that the healthcare services were working with the military to ensure that, via contact tracing, the virus did not reach the front lines.

"We are tracing every single COVID-19 diagnosis to ask those who've been in close contact to isolate. This data is provided to the @ArmeniaMODTeam, so they're able to prevent the virus from getting to the frontlines." – Lusine Paronyan, RA Ministry of Health#Artsakh #Karabakh

Paronyan and her colleagues also urged Armenians to recall that the country was now fighting two wars, and that neither had yet been won:

Senior official from Armenia's National Center for Disease Control & Prevention: Since the outbreak of war in Artsakh, COVID-19 numbers have dramatically increased – by 13%. Called for ppl to remain vigilant & follow safety guidelines.#COVID19 #ArtsakhStrong

Armenia's Minister of Healthcare Arsen Torosyan suggested that Azerbaijan's leadership would also be culpable for any rise in COVID-19 deaths in Armenia and Karabakh:

International organisations are increasingly invoking the pandemic in their appeals for de-escalation.

For Hans Klüge, head of the World Health Organisation (WHO), further hostilities will directly contribute to a serious spread in COVID-19 cases.

“I don't expect the war have an impact; I know that it already has,” concludes Beglaryan, the Human Rights Ombudsman. “It's very visible that the conflict has affected the COVID-19 situation negatively, very negatively. We don't have exact numbers because of the workload that the health system has. The health system is not testing and treating cases as properly as it was, so we don't have general statistics either. Based on my talks with doctors and the Minister of Healthcare, it's quite clear that the case numbers have increased multiple times. Not twice, not three times, maybe ten or fifteen. It's actively expanding.”

But our conversation was interrupted.

“They're striking again,” said Beglaryan, and dropped the call.

This evening, Stepanakert once again came under attack.