Ali Banisadr and the art of ‘visual thinking’

A combination of harmony, chaos and unique Interpretations 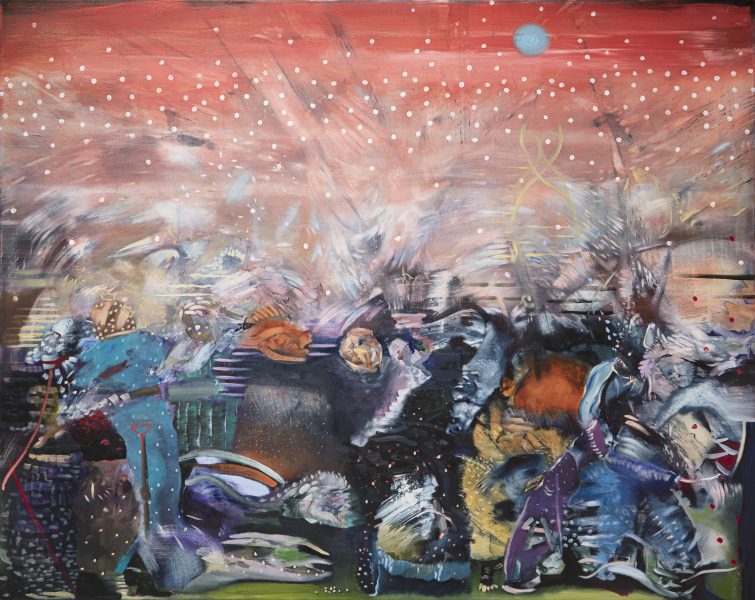 Ali Banisadr’s MATRIX 185 exhibition at the Wadsworth Atheneum Museum of Art is the Iranian-American artist’s first solo museum exhibition in the US. The exhibition opened on October 22, 2020, and will run through February 14, 2021.

Ten paintings and two prints by Banisadr join a selection of works from the Wadsworth collection chosen by the artist, as well as a video collage that Banisadr created to show additional works from the museum’s collection. The visual and narrative content of his works is shaped by his exposure to war, pop culture, cinema, graphic novels and European painting. He told The Met that he paints the sounds and sights of war.

Banisadr was born in Tehran in 1976, and moved to the United States when he was 12, during the Iran-Iraq War (1980-1988). In 2000, he moved to New York, earning his Bachelor of Fine Arts from the School of Visual Arts, and later his Masters from the New York Academy of Art.

At 44, he is one of the most promising and successful artists in the US, and his paintings are collected by major museums around the world, including The Metropolitan Museum of Art in New York, The Museum of Contemporary Art, Los Angeles, Centre Pompidou in Paris, and The British Museum in London. 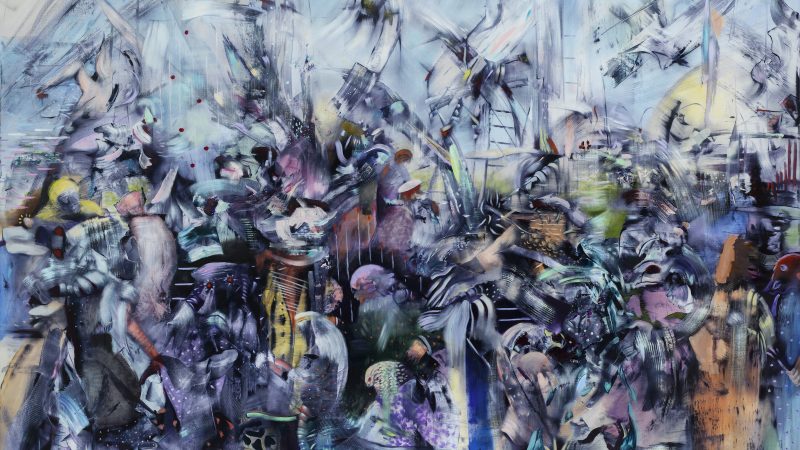 Banisadr’s paintings are aesthetically beautiful and conceptually mesmerizing and multilayered. They invite the viewer to visit an imaginary world with familiar and unfamiliar elements that create a labyrinth of meaning, form and color. His paintings might also be reminiscent of giants like Francisco Goya, Pieter Bruegel and Hieronymus Bosch, although in many ways his energy, symbolic language, environments and characters, as well as the cryptic and coded world he creates, make him stand alone. He creates a magical combination of harmony and chaos that keeps the viewer outside the door, and invites a personal and unique interpretation.

Omid Memarian: You work on one painting at a time. Why and how does that work?

Ali Banisadr: When I begin a new painting, it becomes a very involved process. Once I start a painting, we open up a dialogue that leads to a lot of research, reading, looking at art works in relation to the painting in progress, etc. My mind becomes very much occupied by the painting and if I opened another dialogue with another painting, it would just become overwhelming.

OM: You spent your childhood in Iran and moved to San Diego when you were 12 years old. How did your experiences in Iran affect what you did later, particularly in pursuing art, painting, and life in the US?

AB: It's hard to say. Of course, everything you experience in some way affects your work. One thing I can say is that it is helpful to be able to think about things through the lenses of two different cultures at once. Instead of having just one point of view, you can listen to different voices which may sometimes be in opposition. I feel it's a healthy way to understand the world and I've always liked the idea of multiple points of view. There is never just one way or a single answer. 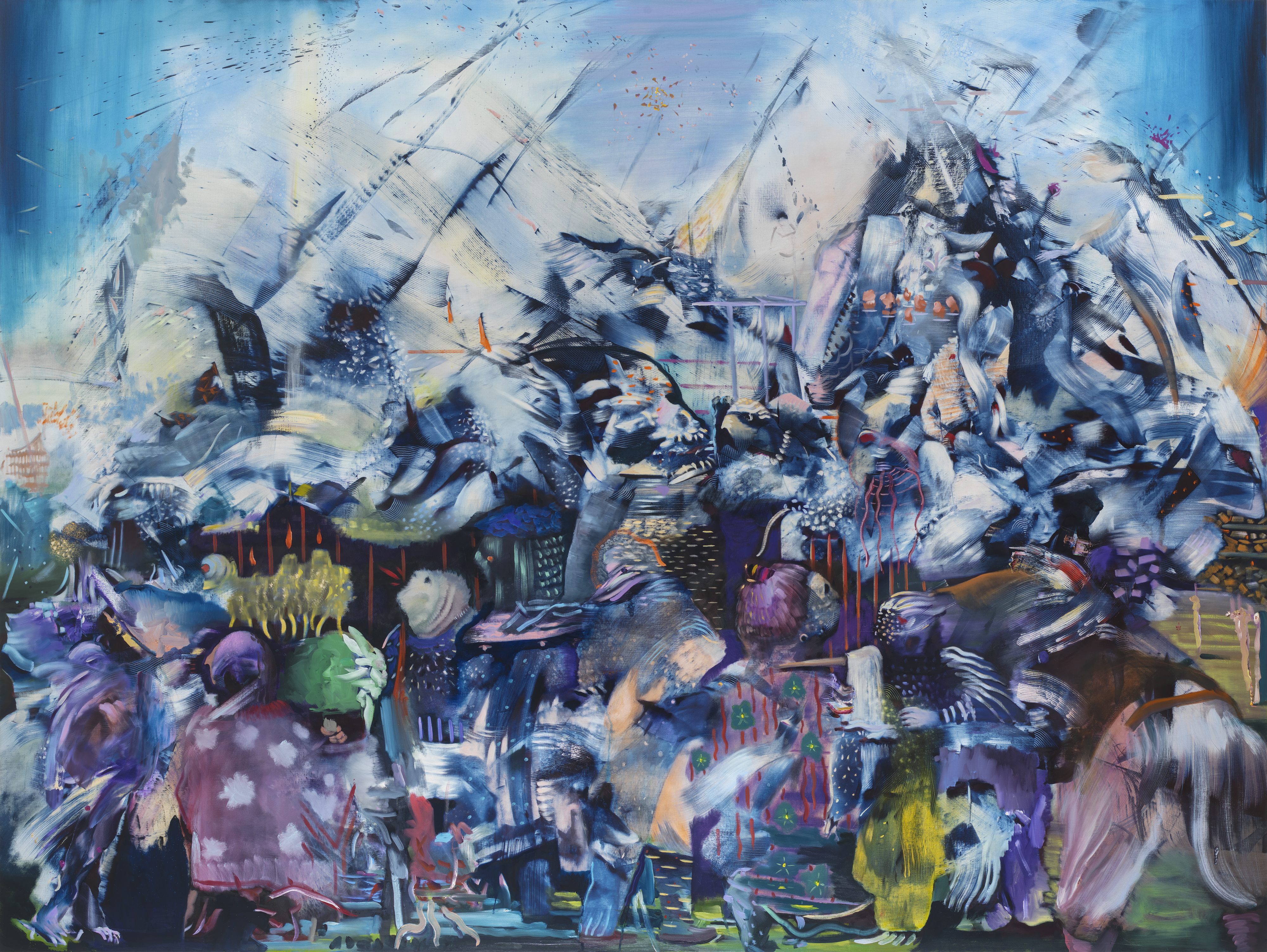 OM: In 2000, you moved to New York to study at the School of Visual Arts, and later you received your Masters in Fine Arts from New York Academy of Art. How did school change or shape your vision and contribute to your creativity and work?

AB: When I went to school I was ready to learn as much as I could. I was thirsty for it because I had spent a lot of time experimenting on my own to get an understanding of what lies inside of myself and what it wants. Then I just had to learn some structure to be able to unveil it.

OM: You are one of the most talented and also successful current artists in the US, and your works have been exhibited/collected by major museums/collectors. How has this level of success affected your work?

AB: When I am painting, my goal is to turn off my rational thinking—”the voices of others,” as Guston has said—and to think in a different way—visual thinking. So I don't think these external forces factor into my practice of painting.

OM: What’s your definition of success for art and artists? 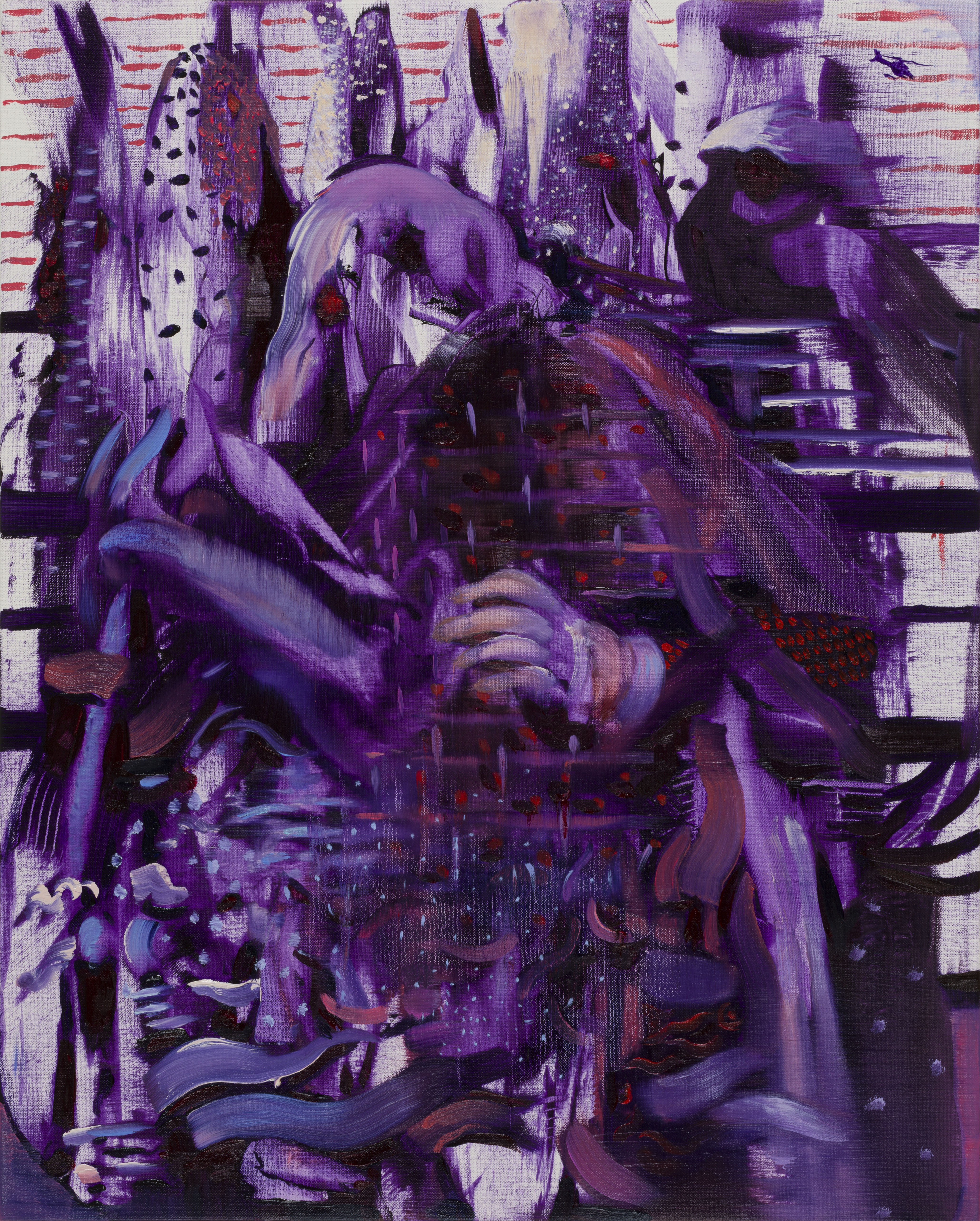 OM: How do you describe your technique and style of storytelling in your paintings in relation to others whom you might have studied or been influenced by?

AB: In this case, I would just refer to the paintings themselves. It is a hard thing for me to try to break down words; one has to simply look at the paintings, and all those traces of past, present and future can reveal themselves, but they come and go like dreams, not easy to grasp and pin down.

OM: How about the Iranian 19th-century tradition of coffee-house painting? How much did you know about this tradition when growing up and after? Was it part of your visual imagination at all?

AB: It is a very interesting way to be able to tell a story; what I like about it is that they are worlds within worlds. You can have the same person shown in the story when they are young and then when they are old. It's a bit like a time machine, which I appreciate and think about within my own work.

OM: Good music and novels have been two of your sources of inspiration. How have they found a way into your painting?

AB: Music goes inside of my body and it turns into visual worlds. Novels and poetry can also provoke powerful imagery but also create a musical orchestra. Films can have a combination of sounds and imagery, but also movement. They are all a point of reference that comes and goes as I am painting. Since I don't use any references, they sort of become a part of my visual vocabulary to refer to when I am working.

OM: What’s your intellectual and creative process in setting the scene that makes every painting share common characteristics and, in particular, the highest level of symbolism?

AB: Each time I start working, it's like a dive into the abyss and the unknown. When I am not painting, I am doing a lot of research based on the content I am interested in at the time—this can be triggered by a current event topic, but I am not just satisfied with that immediate topic. I like to research its history, see echoes of it in the past, in books written about the subject, art which was made about the subject, so, in a way, I fall into a rabbit hole of research with each painting and these contents may or may not work their way into the painting. 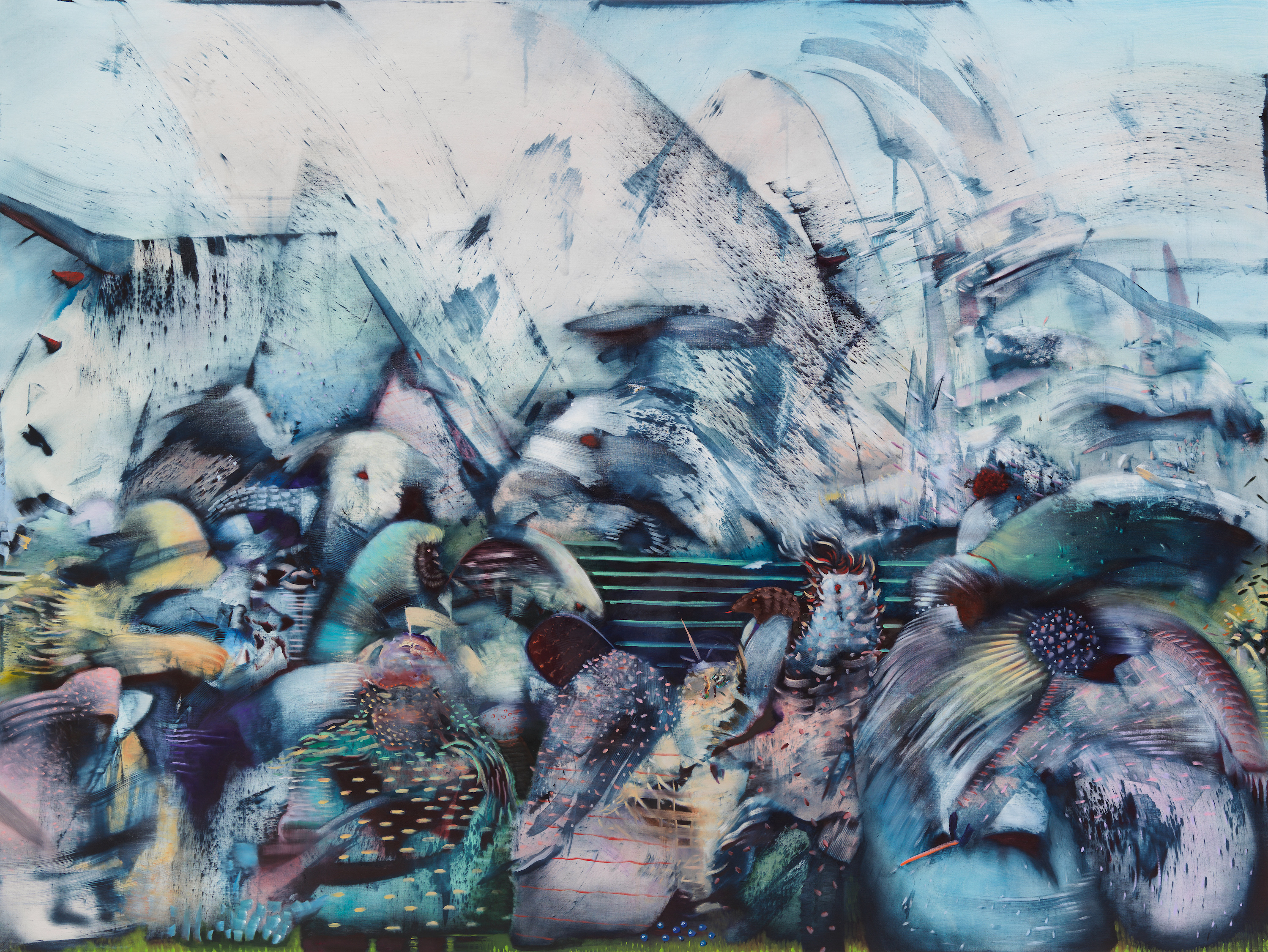 Fields of Energy, 2019, Oil on Linen, 66 x 88 inches, courtesy of the artist and Galerie Thaddaeus Ropac

OM: In an interview, you recently said, “I want my paintings to have that feeling of metamorphosis, where you're looking at things becoming something else. Because that's the truest mirror of imagination and memory and dreams—things are always changing.” How did such a philosophy grow within you, and what elements helped shape it?

AB: I was always interested in how imagination, memory, dreams and hallucinations work. All these elements have shaped our world and connect us with things that go beyond our rational thinking. This fascinates me.

OM: What is the title of your 2019 painting, Thought Police, refer to?

AB: The title refers to George Orwell's 1984 novel which I have been thinking alot about lately, such a prophetic novel, especially for our time!

Ali Banisadr has also curated part of the Wadsworth's collection (Goya, William Blake, Hiroshige, Max Ernst, etc). He has a solo show coming up at the Benaki Museum in Athens, Greece, from November 3 until January 30, 2021, and also has an upcoming monograph, published by Rizzoli, to be released next spring, to coincide with an exhibition at Kasmin Gallery in New York.