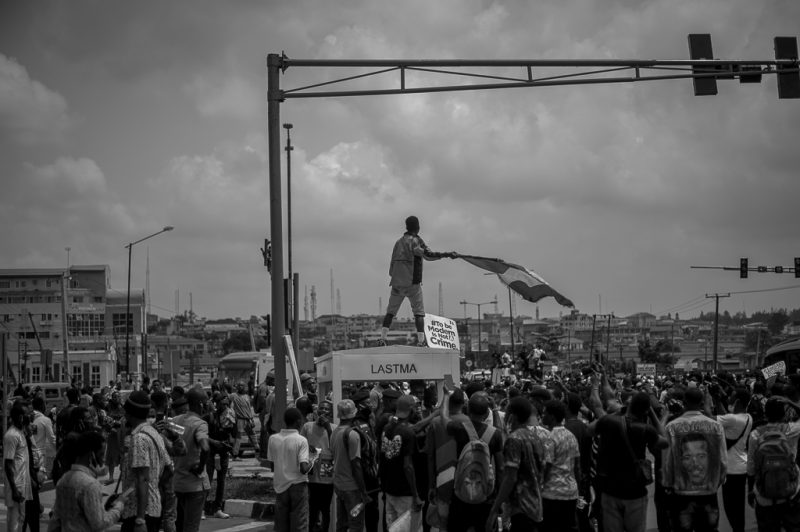 Over the last 11 days, Nigerian youth have staged nationwide, peaceful protests against police brutality inflicted by the Special Anti-Robbery Squad known as SARS.

Yet, in the early hours of October 19, chaos broke out when thugs attacked protesters in front of the Central Bank of Nigeria headquarters in Abuja, Nigeria’s capital, during a vigil for those slain by SARS, as part of the #EndSARS movement.

The unidentified gunmen set the cars of protesters ablaze according to eyewitness reports on Twitter.

Everybody wake up. It’s happening. Abuja protesters are unsafe. Gunshots are being fired, cars are being set on fire and hoodlums are physically attacking and beating up protesters at CBN headquarters as we speak. @EndSarsResponse please help! #EndSARS

Soldiers were later deployed in the capital city.

The following day, on October 20, Lagos State Governor Babajide Sanwo-Olu imposed a 24-hour curfew in the state, claiming that “criminals and miscreants” have hijacked the protests to “unleash mayhem.” Similarly, the Lagos State Police Command has also banned all protests in the state.

Hoodlums in Orile Iganmu (Lagos) lynched a police officer after he killed a young man. They then set a police station on fire. All events around this must be condemned unreservedly as they are atrocious and barbaric.

Peaceful protesters please stay away from these areas #EndSARS

Apparently, the incidents in Abuja, Benin city and Lagos have one thread in common: thugs inflicted violence, displaced peaceful protesters and pronto — Nigerian authorities clamped down on mass action to express anger at SARS and an overall culture of police brutality that targets Nigerian youth.

Amid growing panic and fear over the last 24 hours, security operatives opened fire on protesters at around 7 p.m. WAT on October 20 in Lekki toll gate, Lagos, reports Bloomberg.

Eyewitnesses report that security officials turned off the lights at the toll gate and were firing indiscriminately.

PLEASE GUYS!!! THEY ARE NOT SLOWING DOWN WITH THE SHOOTING IN LEKKI. PEOPLE ARE DYING!!! #EndSars pic.twitter.com/5FeaMtJsUH

Soldiers blocked the exit points and have so far allegedly killed three people, according to at least one eyewitness who reported the news on Twitter:

The military have shot 3 people at lekki toll gate and carried their bodies to their front. They’re telling everyone to go home while also blocking their exit points !!! This is a bloody execution box #ENDSARS

The Enough is Enough civil society organisation described it as a declaration of war on citizens:

The Nigerian government under the leadership of @MBuhari @ProfOsinbajo @jidesanwoolu has declared a war on the people they swore to protect. #EndSARS

This Twitter user Nicholas Ibekwe tweeted that the killings seem to him to be premeditated:

The short notice for the curfew and the removing of the CCTV point to the fact that the Lekki Toll Gate Massacre was pre-planned.

Clamping down on youth sòrò sókè — ‘speak up’

Video of the Festival of lights to honor those killed by the SARS police unit, Lekki, Lagos, Nigeria, October 17, 2020. Video by Olawole Oyekan and used with his permission.

The youth mass action against SARS police brutality defied all expectations. All efforts to weaken the movement failed miserably.

Organised as a collective, the movement presented a common front that prevented the government from bullying into silence or the bribing of protest leaders.

Despite the brutality meted on protesters by Nigerian security agents, the young people did not flinch, rather they organised their own security to keep themselves safe while demonstrating.

The most compelling element of the #EndSARS protests has been the powerful images and this one is my favorite. It's resonant & captures the movement – two young, carefree women running from a police tank, with one of them defiantly posing. Peep the NASS dome in the background. pic.twitter.com/klZlinAi0Y

Their highly competent organisation across the country attracted commendation from religious leaders who endorsed the protests.

The nonviolent soro soke or “speak up” movement against police brutality exposed the rancid underbelly of Nigeria’s misgovernance.

The Nigerian establishment, rather than give in to protesters’ demands, decided to clamp down on protesters’ pleas against injustice with violence.

The protesters did not instigate violence despite various provocations. For instance, protester Anthony Onome died in Abuja on October 18 after being stabbed by thugs. Amnesty International also reported physical assault of protesters and journalists by police.

With your thugs, you rigged your way to power by intimidating voters and diverting ballot boxes.

With your thugs, you're injuring and killing innocent #EndSARS protesters.

Can you really do something without your thugs? Like, what would you ever do without them?

This has fueled suspicion that the invasion of thugs on peaceful protesters in Abuja, Lagos and Benin city were instigated by state actors to discredit the #EndSARS protests.

Consequently, the curfew is a ruse to subdue the movement. What’s easier, acquiescing to the demands of the protesters or quelling stage-managed violence instigated by officials of the state?

Curfew in Lagos was the final move in the playbook.

The script and the acting was well delivered by the government. Nice game? but you people have not won.

The next social mass action to fight police brutality may not be as peaceful as the #EndSARS movement.