Ending police brutality in Nigeria: A festival of lights to honor the dead 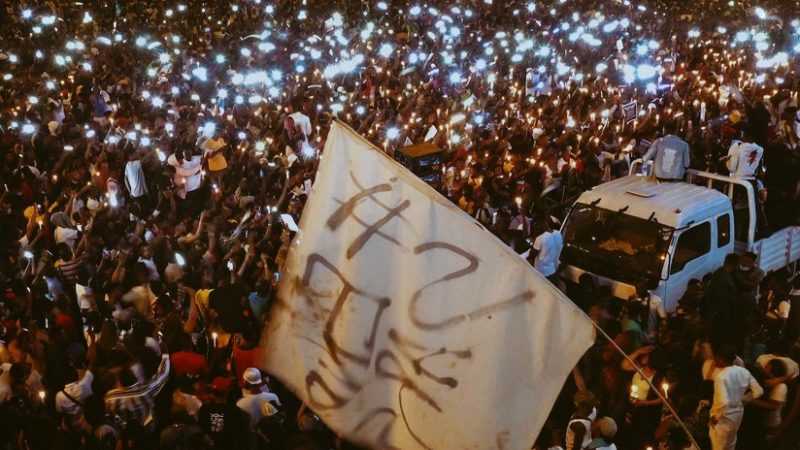 Festival of lights to honor those killed by the SARS police unit, Lagos, Nigeria, October 17, 2020. Photo shared widely on Twitter under #EndSARS movement.

As #EndSARS protests continue to erupt across Nigeria, so does police brutality.

The #EndSARS movement began on Twitter as an outcry against the Special Anti-Robbery Squad (SARS) of the Nigerian police force, which later spilled onto the streets as Nigerian youth-led protests now enter their 10th day.

Protesters recently agreed to hold a festival of lights in honor of heroes who lost their lives due to police brutality. More than 100 people have reportedly been killed by SARS in the past four to five years, according to Amnesty International.

Candle light vigil by #EndSARS protesters for those killed. pic.twitter.com/SDYes2Kdnt

The country experienced a very touching moment at 7 p.m. Nigerian time on Friday, October 17, as more protesters gathered for lights festivals in the country's federal capital, Abuja, as well as Port-Harcourt, River State capital, and other major cities throughout the country.

At Lekki Toll Gate in Lagos for example, the number of protesters was beyond count.

Lekki Toll Gate last night. This is REALLY HAPPENING. We must join the #EndSARS movement and support however we can!!!! pic.twitter.com/MZscqzT4Zv

The story of one of those who lost his life to police brutality — a youth named Chijoke Iloanya, aged 20, — was delivered at the Abuja festival of lights. Testimony from his ordeal was heartbreaking and created a teary, silent moment. As humans, it left a scar on many protesters’ hearts.

Listen to Chijioke’s story. Feom Festival of Lights, Abuja: held in honour of the ones we’ve lost.?#EndSARS
PART 1 pic.twitter.com/ROqGeOIvDb

Iloanya was allegedly killed in 2012 by Chief Superintendant of Police James Nwofor. CSP Nwofor allegedly told the victim's mother that he was going to kill her son and nothing was going to happen.

Protesters seek justice for Iloanya, whose murder has still not been investigated or brought to justice.

We were Happy That Our Dream is coming to reality, we worked hard for this, we Will not Stop the fight. We Lost Innocent Lives to The Hands of Brutal Men. Justice Will Be served. We Keep The Change Alive ✊??…#SARSMUSTEND #EndSARS #EndSWAT https://t.co/y2vgPO9AlI 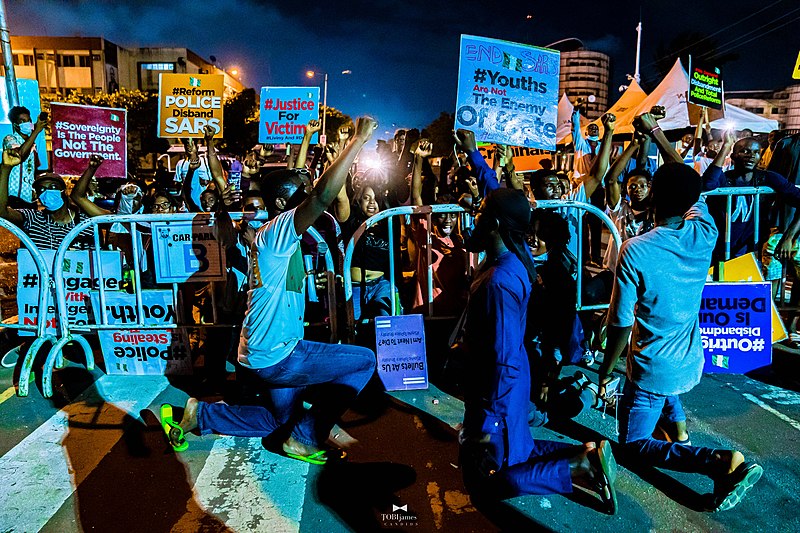 Late at night after an address by Lagos State chief of staff, protesters took a knee as the national anthem played in Lagos, Nigeria, October 8, 2020. Photo by TobiJamesCandids via Wikimedia CC.BY.4.0.

Overall, protesters want action by the government and not just words and promises. They vow not to leave the streets until their five main demands, known as #5for5, are met:

As a result, the federal government has set up a presidential panel on police reforms, which, in a few days, came up with several resolutions to meet protesters’ demands.

Bashir Ahmad, the personal assistant on new media to President Buhari, confirmed on Twitter the president's acknowledgment and acceptance of the panel and intention to meet protesters’ demands:

JUST IN: The Presidential Panel on Police reforms swings into action, okays #5for5 demand of #EndSARS protesters.

The presidential panel has also recommended that 37 members of the Special Anti-Robbery Squad be dismissed for misconduct and also, another 24 people will be prosecuted for various human rights violations.

During the national executive council meeting on Thursday, chaired by Vice President Yemi Osinbajo, it was recommended that each state governor should set up a Judicial Panel of Inquiry to investigate police brutality in their state.

However, River State Governor Nyesom Wike disagreed with the recommendation, making reference to previous efforts that were never implemented in which taxpayer money used for investigations simply went down the drain.