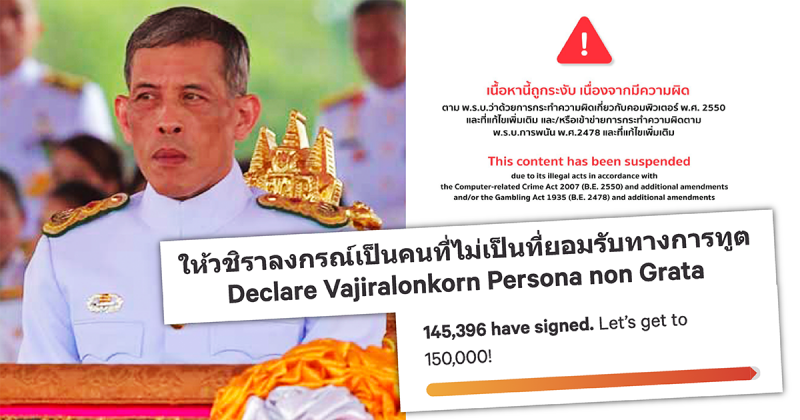 A petition calling for Germany to declare Thai King Vajiralongkorn a persona non grata has been blocked from access in Thailand. Image from the Stand News.

Despite the announcement of an emergency decree on October 15 and police crackdown on October 16, tens of thousands of Thai protesters continued protesting in the streets over the weekend demanding democratic reform.

A major grievance was directed at the monarchy as reflected in a global Change.org petition demanding the Thai king, Maha Vajiralongkorn, “permanently return to Thailand” and “discharge his royal duties as the reigning monarch in his country”.

The petition appealed specifically to authorities in Germany:

King Maha Vajiralongkorn, who ascended to the throne in 2016 has been a controversial figure; he has direct control over two army units and multi-billion-dollar holdings, and he spends most of his time in Germany.

The Thai people are getting angrier because he is not in Germany just as a tourist and hasn't stopped intervening in Thai politics…He is here in Germany and continues to have influence.

The petition was blocked from Thai access by three major Internet operators since October 15 according to a report from Thai Netizen Network on Facebook. In Thailand, any critical comments about the King and the royal family could be charged under criminal code section 112 and result in a sentence of 3 to 15 years in jail.

The Thai State has blocked https://t.co/XskfBKQKL9 in Thailand due to the petition requesting the German government to declare King Vajiralongkorn persona-non-grata in Germany. #WhatsHappenningInThailand https://t.co/M8eulLl0u8

The King has recently returned to Thailand from Germany in order to attend the late King Bhumibol Adulyadej's memorial day on October 13. The declaration of the state of emergency was announced two days later on October 15, after a peaceful confrontation between pro-democracy protesters and royal family supporters near the Grand Palace on October 14.

At the confrontation spot, peaceful pro-democracy protesters were chanting with the three-finger salute as Queen Suthida’s vehicle passed. At least two activists were arrested for allegedly attempting violence against the Queen, a charge that could lead to life imprisonment if found guilty.

The three-finger salute also signifies three key protest demands: the dissolution of parliament, ending intimidation of the people which includes the abolition of royal defamation law, and the drafting of a new constitution that would lead to the reformation of the monarchy.

These demands are reflected in the following parody:

If you wonder why we desperately need the reformation of the monarchy, I will gladly provide the translation of this parody of Thai national anthem which demonstates how King Vajiralongkorn really is #whatshappeninginthailand#ม็อบ14ตุลา pic.twitter.com/75bbXZG2is

@minimonilogist translated the Thai lyrics in the Twitter thread:

King Vajiralongkorn spends most of his time in Germany with his concubines living in luxuries while the people of Thailand is facing the economic crisis which got worse than before due to COVID-19. He travels back and forth on Thai airway which is currently in bankruptcy – But with the government's support, it continues to survive *using people's taxes*. Many Thai businessmen, who have been exploiting their workers, support the King's reign, offer their money for the king to spend as he pleases. Thailand's annual fund goes mostly to support the monarch and the rest of the royal family (approx. $641M). This is why the people protest, we are having a crisis, many live in poverty. Yet the king is spending our taxes and abusing his power through the government and the police. We ARE ANGRY! Both the monarchy and the coup need to end! We want real democracy for the people and only for the people. Not dictatorship in a democracy disguise!

The King's residence in Germany is a major target of complaints:

Thousands of protesters have taken to Thailand's streets to demand reforms. One key issue is that their king spends most of his time in Bavaria.

As pointed out by Bangkok-based writer Tyler Roney, Thailand is going in a historical moment of political change:

Thai protesters are attempting to resurrect the history of Thailand’s democratic legacy, Tyler Roney writes. The result has been a battle of wills between the protesters and the Thai authorities.https://t.co/7Y60qrULgn

Support from the ‘Milk Tea Alliance’ and Hong Kong-based activists

A wonderfully touching video by a #Thailand-born #Taiwanese, showing the unity and solidarity of our brave #Thai friends.

Be kind to your fellows, have faith in collective wisdom, be fluid on strategies, be determined in actions.
Never lose hope, stay safe.#StandWithThailand #BeWater pic.twitter.com/x7yanOJJI5

#Thailand, we are not there with you, but we feel you deeply. It is the least for me to say, we are in this together. We stand with you just like what you did when we needed a friend. #StandWithThailand #MilkTeaAlliance#หยุดคุกคามประชาชน#ขีดเส้นตายไล่เผด็จการ pic.twitter.com/ICPOPOfAOi