Campaign speeches should not 'defame' the military and the nation 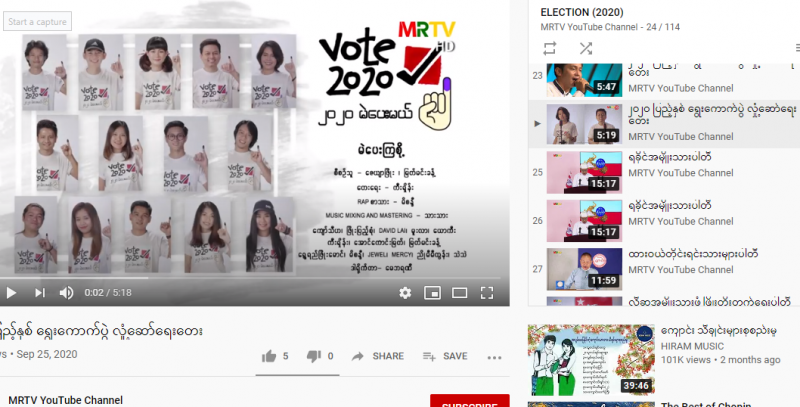 Screenshot of YouTube channel of MRTV, a state-run media network in Myanmar. The channel shows the campaign videos approved by the Union Election Commission.

Myanmar’s Union Election Commission (UEC) has been censoring the speeches of political parties that want to broadcast campaign materials on state-run TV and radio networks.

Around 7,000 candidates from more than 90 parties are competing for 1,171 legislative seats in Myanmar’s general election, scheduled for November 8.

In July, UEC released a set of guidelines on how candidates and parties can broadcast campaign speeches on state-run media outlets. Candidates have to submit a manuscript one week before the broadcast for review and approval by the UEC and the Ministry of Information.

Speeches can run for up to 15 minutes, but should not contain content that:

Myanmar was governed by a military dictatorship for several decades, then transitioned into civilian rule in 2010. The 2008 Constitution, however, ensured that the military would continue to exercise political influence, including on the Parliament.

The opposition National League for Democracy (NLD) defeated the military-backed party in the historic 2015 general election, but has failed to reverse draconian laws passed by the military to persecute the opposition. Laws that criminalize criticism of the military have remained in effect, including the controversial section 66(d) of the 2013 Telecommunications Law, which is used to charge online critics.

Several political parties said their campaign speeches were censored based on the guidelines released by the UEC. As of October 4, around 10 parties reported experiencing censorship, and six have decided not to air campaign speeches on state-run media.

The word ‘oppressed’ is not allowed. And the facts about the children’s rights are not allowed. There is legal oppression and also in other areas. We used the word as we need to fix those issues. We will make our campaign speech available through other channels.

The Arakan League for Democracy's general secretary Myo Kyaw said his speech was also censored and accused the NLD-led government of using the methods of the military regime:

This censorship seems like something the dictatorship did. They shouldn’t mess with the party’s tone. Shouldn’t there be freedom of expression? As a political party, we should be able to express our opinions and beliefs.

Ko Ko Gyi, chairman of the People’s Party, told Radio Free Asia that the following part of their speech was rejected by the UEC:

Local entrepreneurs are now facing major hardships in competing with foreign investors because of high bank interest rates. In collecting tax revenue, we will make sure to broaden the base for collecting taxes to avoid tax burdens and create a simple and fair tax revenue system.

Ko Ko Gyi explained why the party eventually decided not to broadcast their speeches on the state-run media:

The commission is censoring and editing our campaign speech before the voters can make a choice. We don’t accept that because it has violated the basic principles and standards of a multiparty democracy. That’s why we’ve decided to not take part in broadcasts on state-owned media.

Frontier Myanmar, an independent news company, noted that the decision of some parties not to air censored speeches on state-run media could have boosted their public profiles:

The media coverage they have received due to the election commission’s censorship, and because of their principled stands against it, has outweighed whatever benefits they would have received from being given a freer rein on air.

Human Rights Watch criticized the guidelines released by the UEC:

They undermine the fairness of the electoral process by preventing opposition parties from presenting their policies in full where those policies involve criticism of the government, the military, or the country’s many abusive laws.

Matthew Bugher of ARTICLE 19 said the guidelines have further undermined freedom of expression in Myanmar:

The restrictions on expression imposed by the UEC harken back to the days of pre-publication censorship under military rule. The ability of political parties or politicians to speak candidly about the performance of the incumbent government and the military is astonishingly limited.