A spill could create a “dead, contaminated sea" 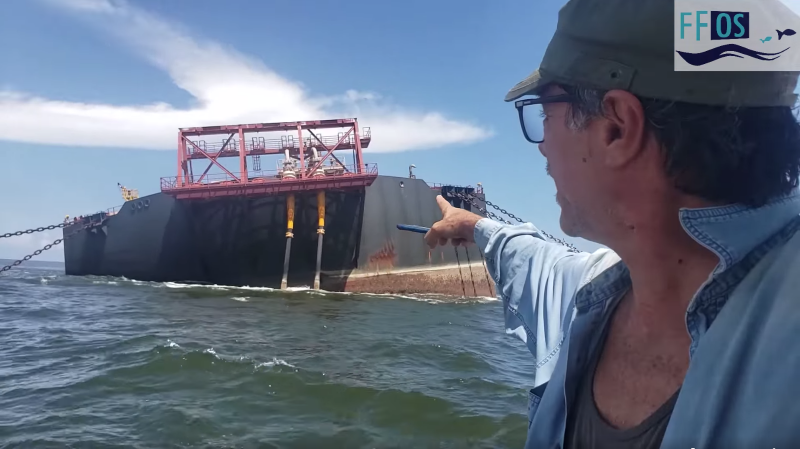 Screenshot of the FSO (Floating Storage and Offloading Unit) Nabarima, the vessel in danger of sinking and creating a huge oil spill in the Gulf of Paria, taken from a video uploaded by Fishermen and Friends of the Sea, the Trinidad and Tobago-based non-governmental organisation that raised the alarm about the situation.

This article was originally published on Cari-Bois News. An edited version is republished here with permission.

The FSO Nabarima, a huge oil tanker containing approximately 1.3 million barrels of crude oil, has taken on water and is leaning to one side off a remote stretch of Venezuela’s coast in the Gulf of Paria.

As authorities in Trinidad and Tobago, the twin island nation located approximately 11 kilometres (6.8 miles) off Venezuela's north east coast, grapple with how to respond to the crisis happening just beyond its borders, questions are being raised about the potential environmental impact of an oil spill of this magnitude in the Gulf of Paria — an ecologically sensitive area bordered by mangroves, which is also important for fishing.

The Cari-Bois Environmental News Network, an initiative of The Cropper Foundation and its partners, reached out to the team of scientists and environmental experts at the Trinidad and Tobago-based non-profit SpeSeas, to determine what the possible environmental impacts would be if such a spill were to take place.

Given the position of the FSO Nabarima and SepSeas’ knowledge of the general circulation pattern in the Gulf, they expect the Paria Peninsula to be most at risk.

The ecosystems which line the Gulf of Paria include mangrove forests, coastal lagoons, estuaries, beaches/sandy shores, rocky shores, open ocean ecosystems and their associated biodiversity. Depending on the trajectory of the potential oil spill, all of these ecosystems would be at risk.

The Gulf of Paria provides important migratory routes and habitats to megafauna, including birds, whales, dolphins, turtles and other marine fauna, as well as commercially important species such as shrimp and fish, all of which will likely be impacted.

Because oil typically floats on the surface of the water, the animals most affected are those that found at the sea surface or along shorelines, including fish and invertebrate larvae, as well as mammals and turtles that need to break the surface to breathe.

In most oil spills, sea birds are typically impacted in the greatest numbers. Oil can smother organisms, coating the feathers of birds and the skin of other animals. Skin and eye irritation can result from external exposure, while internal exposure can happen via ingestion or inhalation. Oil spills may also impair the marine organisms’ abilities to find food, avoid predators, breathe and reproduce. There may be a lower survival in offspring owing to the persistence of toxic chemicals in the food chain, which in turn causes organ damage.

If the oil comes into contact with land, it can affect coastal marine habitats and their residents: mangrove forests, shallow water reefs and other rocky habitats, beaches and mudflats, all of which are especially difficult to clean up. Any fauna closely associated with these habitats will also be negatively affected.

The extent of such impacts depends on a variety of factors, including the characteristics and volume of the oil spilled, wind strength and direction, water movement, circulation, and the clean-up response.

The Gulf of Paria is the most important fishing ground for shrimp and finfish in Trinidad and Tobago. More than 50 percent of all fishing activity in the country happens here.

Marine fisheries are important both economically and socially for the residents of many rural coastal communities, whose livelihood depends either entirely or partially on fishing. Any oil spill within the Gulf of Paria therefore has the potential to deal a significant blow.

Fisheries also contribute to food security, poverty alleviation, foreign exchange earnings, culture, recreation and tourism. The majority of fishery resources in Trinidad and Tobago are coastal, and accessed by a large number of small-scale fishers.

Communities could be affected

Oil spills can directly impact fishing communities in a myriad of ways. Oil on the surface of the water, for instance, creates added expense for fishermen to clean their vessels and gear. Those who cannot afford these costs may opt not to fish in order to protect their equipment, which translates into significant loss of income. Sales also tend to drop for a considerable period of time after an oil spill, due to consumer fears about whether the catch is safe to eat. This has occurred in response to previous oil spills in the Gulf.

Fish kills — the sudden and unexpected death of a number of fish or other aquatic animals in a specific area — are also a concern. If this were to take place, says SpeSeas, it would most likely occur in inland areas where there is less circulation, resulting in fish becoming trapped. Many of these inland areas also function as nurseries for less mobile larvae and juveniles.

Assuming the oil spreads to the beaches, fauna on mangrove roots — such as oysters and crabs — would also be affected.

How to mitigate the effects

Methods of cleaning up any spilled oil must be carefully evaluated, however, as these processes can sometimes do further damage, especially along coastal habitats. Oiled wildlife, meanwhile, can be sent for rehabilitation. Other clean up options include replacing contaminated beach sand and replanting mangrove, marsh and seagrass beds.

Local and international reports have said the sinking of the FSO Nabarima could potentially result in the leaking of oil into the Gulf of Paria, with devastating effects — essentially turning the area into a “dead, contaminated sea.”

Noting that it was difficult to speculate as to the likely extent of the impacts, the SpeSeas team advised that due diligence should be exercised to prevent the spillage of any amount of oil. Given the considerable threats, they advised that the situation should be closely monitored.

What is being done by the Trinidad and Tobago authorities?

The Ministry of Energy and Energy Industries (MEEI) has been in contact with the Venezuelan government regarding the condition of the vessel and the risk of an oil spill, and has offered its assistance.

At this point, the FSO Nabarima is still situated in Venezuelan waters and Trinidad and Tobago will likely not be able to act unless the Venezuelan government requests assistance.

In the interim, Trinidad and Tobago netizens have been signing a petition demanding that immediate preventative action be taken, that the country is prepared in the event of a spill, and that the public is kept abreast of all developments.