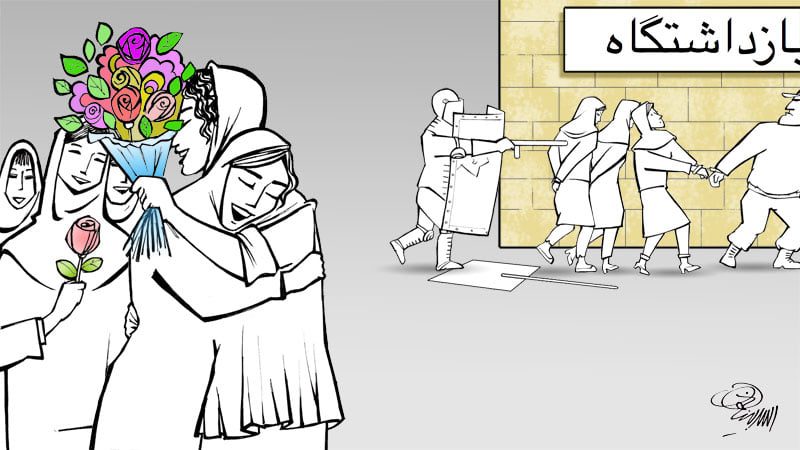 An illustration depicting Iranian human rights activist Narges Mohammadi being congratulated upon her release from prison, while other Iranian women are arrested. By Assad Binakhahi, Germany-based cartoonist. Used with permission

White torture is a psychological torture technique in which inmates are held in all-white cells for very long periods of time. It is aimed at producing complete sensory deprivation and isolation in the victim. It is one of the torture methods used in Iranian prisons, alongside physical torture.

It is also the name of a new book by Narges Mohammadi, a leading Iranian human rights activist and journalist. “White Torture,” printed in Persian by Swedish publisher Baran, features interviews with 12 female political prisoners, as well as the experiences of the author, who spent eight and a half years in an Iranian prison herself.

The 12 interviewees are journalists, members of religious minorities groups, and political activists. Their stories reveal the appalling state of Iranian prisons: Disastrous sanitary conditions and tiny and lightless cells are commonplace; prisoners face intentional deprivation of medical care, long hours of interrogation, threats to their family members, and the use of solitary cells as an instrument of torture.

Reza Kazemzadeh, a Belgium-based leading Iranian psychologist who works with victims of torture, wrote about the white torture technique:

It can be argued that if physical torture is used at the beginning of an arrest to make a prisoner talk (providing information), the purpose of the psychological torture is to infiltrate the identity and influence his or her personality in the long run.

The book reveals that the 12 women interviewed were not arrested for crimes they've committed, but because Iranian security and intelligence services consider them useful in investigations. They put these prisoners under extreme duress to extract confessions or force them into collaboration. 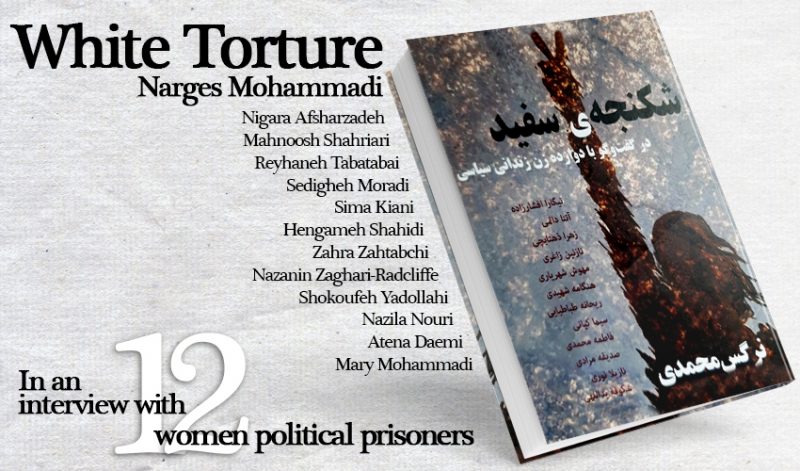 Cover of “White Torture,” a book by Narges Mohammadi. Photo used with permission.

In the book, Mohammadi also tells of her own experiences in prison, including time in the solitary cell and interrogations. As she details, the interrogators usually had all the information they needed, but still demanded she declared resignation from Defenders of Human Rights Center, a group founded by prominent Iranian lawyers including Nobel Peace laureate Shirin Ebadi.

Mohammadi, who is also a campaigner against the death penalty, writes in the book:

The solitary cell is not just a location, but a place where all elements concur to make to have the imprisonment impact us. This includes the indifference of doctors towards our pain, blindfolding prisoners, dirty curtains, dead cockroaches on the floor, unfitting prison clothes, and long periods of sitting in interrogation cells.

Each prisoner reacts to the circumstances in a different way. Nigara Afsharzadeh, a Turkmen national given a five-year sentence in 2014 for alleged spying, explains how talking to the ants in her cell helped her cope: “I just wanted to share my cell with another living being,” she says.

Baha’i former prisoner of conscience Sima Kiani says: “I would rather be interrogated than be left alone in a cell.”

The interrogators also use medical and family information to pressure prisoners. Mahvash Shahriari, another Baha’i citizen who spent 10 years in prison, says threats made against her husband and son were “the most difficult” aspects of the interrogations.

Nazanin Zaghari-Ratcliffe, an Iranian-British citizen, explains how she was denied medical care in prison, including prescribed medicine.

Christian convert Mary Mohammadi, who served six months in prison for being a member of a house church, tells how guards constantly insulted her, her parents, and her Christian faith. “They would call the church a gambling house,” she says.

The book explains how the interrogation tactics are aimed at turning prisoners into collaborators. An interrogator declared his love to Hangameh Shahidi, a journalist and women's rights activist, and asked her to marry him in exchange to closing her file. She rejected the offer harshly, saying she would rather serve her sentence than meeting him again.

In this context, several of those prisoners still managed to undertake hunger strikes to defend their dignity and rights.

Awareness about this kind of torture and the ways to identify the symptoms in victims’ behaviour and moods is key. It is essential that the victims, their families, and the broader community know about the root causes of the unusual behaviour in some specific circumstances and are able to react in an appropriate way. Former prisoners re-live trauma and suffering caused by torture repeatedly. You should not respond lightly to the way they react stressfully to the ring of a phone, or to some smells and noises. Awareness will help them gradually improve their mental wellbeing.

Kamran Ashtary, the director of Arseh Sevom, an organization promoting democracy, human rights, and civil society in Iran, himself a victim of torture as a teenager in an Iranian prison, tells Global Voices:

Any form of torture can cause psychological trauma. But it’s especially bad for young people under 25 because their brains are still forming. It becomes permanent and life-long (…). Unfortunately, for all of us who have experienced trauma, there is no returning to the people we once were. There is only finding ways to dim the nightmares.