'C' is for comedy 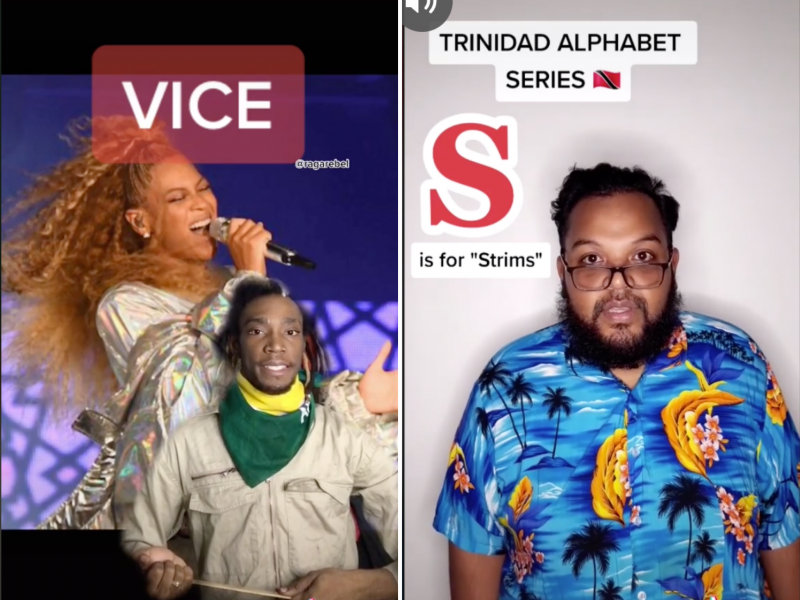 TikTok users @wellonyc and @stephon23, who each do a version of the “Letter of the Day” series. Screenshots taken from their respective TikTok feeds.

Caribbean people are well-known for using humour as a means of social commentary and processing serious issues.

In the midst of the COVID-19 pandemic, with many regional territories having strict safety measures in place — including restrictions on public gatherings — laughter has become a critical coping mechanism, fuelled by humourous offerings on apps like TikTok.

A TikTok user from Guyana, whose handle is @wellonyc, began posting a series of short-format videos — “Sesame Street “style — that featured a “Letter of the Day.” The hook is, of course, that the words he features are all part of the Guyanese (and at times, broader West Indian) dialect.

The phonetic spellings of some of the words poke fun at regional pronunciations, while the backgrounds — like this one for the word rukshun [ruction] — provide additional layers of humour: 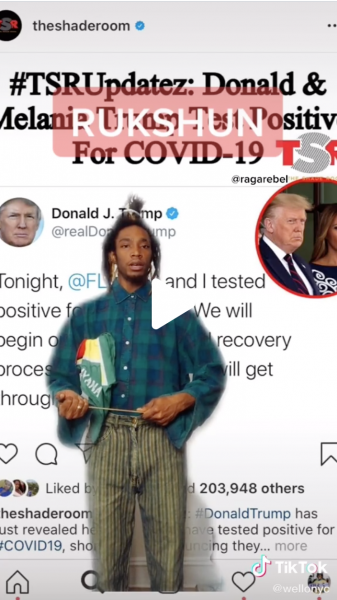 Screenshot of @wellonyc's TikTok “Letter of the Day” video, “R is for Rukshun”.

His work has inspired another online humourist, who has also been getting a lot of laughs and social media attention for his efforts. Stephon Felmine dubbed his version of the videos the “Trini Alphabet Series”: He features words in Trinidad and Tobago dialect, provides definitions, and shows examples of usage in hilarious sentence scenarios, made all the more amusing by his serious expression, reminiscent of a strict headmaster: 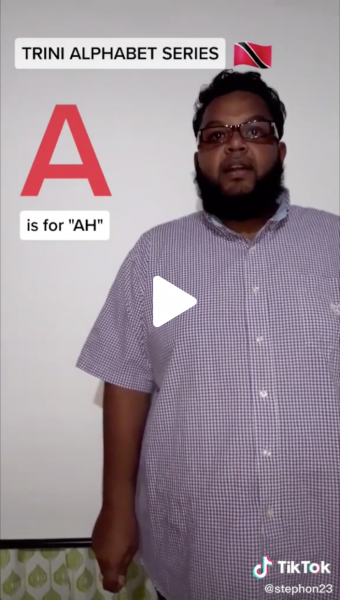 Screenshot of TikTok user Stephon Felmine's version of the “Letter of the Day” series.

It seems, however, that fans of both series are also having discussions around the issue of ownership. On September 29, Felmine posted a public status update on his Facebook page:

For those of you who are saying that I did not give credit to Guyanese TikToker @wellonyc on the ALPHABET SERIES, that is a lie! If you go back to the first letter that I did, “A”, I credited and tagged him. Prior to this I even messaged him on TikTok and told him that I was thinking about doing a Trini version. He never responded but I did my due diligence. Trivial matters like these should not take center stage especially when we have more pressing issues at the fore. The best medicine at the this time is laughter and I am sooooo happy that I could spread it throughout T&T ??. Let us press on […]

Despite Felmine's crediting of @wellonyc in his first post, it appears tension may be brewing between the two TikTok users. On October 5, @wellonyc — who has a spinoff business selling merchandise based on his social media content — posted:

I am the originator of this series! I have not given anyone permission to replicate it. Be inspired but don’t replicate.

Carla Parris, a Trinidad-based entertainment and sports lawyer who produces and hosts the YouTube series “The Business of Carnival,” spoke with Global Voices via Facebook about the issues at play when it comes to intellectual property and social media:

This is a very interesting matter, and one that will certainly continue to become even more relevant as the role of the Influencer becomes more entrenched in Caribbean society.

The question at hand [regarding the TikTok videos] is one of Intellectual Property Law and whether or not a party can claim that his work was infringed. Although many people believe that Intellectual Property protects ideas, it does not protect ideas, concepts or procedures. It in fact protects the expression of an idea and that idea must be original to the creator.

A key question that arises here is whether either of the parties can claim to have created original work and work that would meet the threshold of originality under their respective Copyright Acts? It will be quite interesting to follow to see how this evolves.

Intellectual property issues aside, both series continue to get a lot of social media engagement, and are typically shared across several channels, including Facebook, Instagram and WhatsApp, and Felmine has since appeared in an advertisement as his “Letter of the Day” persona.

Caribbean viewers, both within the region and in the diaspora, have been discussing the words (some of which they'd never heard before), sharing what they understood the meaning of some terms to be, suggesting additional words for various letters, and lauding the talent and ingenuity of the two TikTok stars.

The videos are undoubtedly an entertaining way to learn some colloquial Caribbean terms, immerse yourself in the unique lilt and rhythm of the regional dialect, and have a few laughs while you're at it.