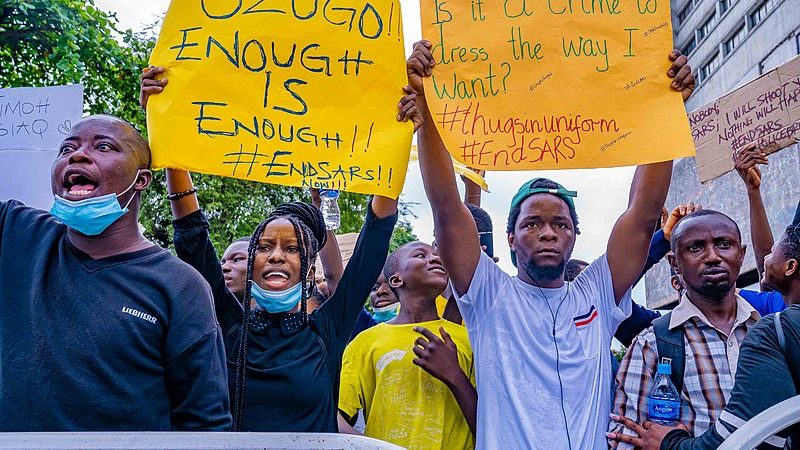 Protesters hold up their placards in front of the Lagos State House, October 11, Photo by TobiJamesCandid [1] via Wikimedia CC BY 4.0 [2].

This past week, Nigerian youth spearheaded widespread protests demanding an end to police brutality, from Lagos to Enugu, Port-Harcourt to Asaba, Kaduna to Uyo, as well as expatriate Nigerian communities around the world.

The protests specifically target the Special Anti-Robbery Squad (SARS), a unit of the Nigerian Police Force that is notorious for arresting, intimidating and killing citizens outside the ambits of the law.

Between January 2017 and May 2018, Amnesty International documented 82 cases [3] of torture and extrajudicial execution by SARS.

Nigerian youth have had enough of this intimidation and are strongly making this known through protests across the West African nation.

#EndSARS, from social media to the streets

The online #EndSARS protests started on October 3, when a video of SARS brutalizing a young man [9] in a Lagos hotel went viral.

As of October 9, the hashtag #EndSARS had racked up [10] 2.4 million tweets and was the number one Twitter trending topic in several countries.

The protagonists of this protest are Nigerian youth. About 60 percent [17]of Nigeria’s 200 million population [18] comprises citizens within a median age of 18 years.

Described as “lazy [19]” by Nigeria’s President Muhammadu Buhari, with over 13 million unemployed [20], usually stereotyped as “unserious [21],” these youth are currently organising and sustaining one of the greatest mass protests in the country.

Nigerian youth are victims of police intimidation, harassment and torture.

READ MORE: Young, dreadlocked or tattooed in Nigeria? Police might harass or kill you. [22]

It is not surprising because this demographic of Nigerians employed their own media — social media — in coordinating and mobilising the protests.

Asides from using Twitter, the decentralized organisation of the protests made use of WhatsApp for information dissemination.

Social media is also a forum for fundraising [26] for the protests and also ensuring accountability [27] for funds expended [28].

Nonetheless, the youth are neither backing down on the nationwide protests nor avenging the hated inflicted on them.

How do we respond to the loss of live and to the wounds inflicted by those who hate and hurt us?

Is it possible to sit with love, before those who have hated us and hurt us?

What does it take for eyes to meet across the streets crowded with differences? pic.twitter.com/Tk1BOiP5Gq [33]

Rather, they are countering this narrative by lobbying for the release [35] of wrongly arrested protestors, organising medical supplies [36] to protesters and also sweeping clean [37] the sites of the protest daily.

Asides from the effective use of social media, the #EndSARS protest has been successful because it is nonpartisan, devoid of ethnoreligious prejudices, possesses a genuine call-to-action for peaceful protests and is a collective that is not tied to any single individual or group.

In contrast, Nigeria’s political space, online and offline, is caustic and divisive. Twitter was a landmine for ethnoreligious heat during the 2019 national elections.

#EndSARS protest credibility stems from being politically neutral and nonalignment with any political party. They are also not demanding a regime change.

Hence, the movement has focused exclusively on their message of ending police brutality. This message is a unifying movement [39] and moment in Nigeria’s contemporary history.

Even when some youth from the northern region tried to label #EndSARS with an ethnic agenda [40], it did not stick as it was disowned [41] by Nigerians from that area.

If you love the North, then you have no business staging a counter #EndSars [13] protest. A fully functional police force works for ALL of Nigeria but especially the North with its high level of insecurity. Oppose this just protest & you would be bitting your nose to spite your face

Nigeria’s over 250 ethnic groups are also encumbered by the religious divide [43] between the predominantly Christian south and Muslim north, with are fodder for clashes [44] of near bestial proportions.

However, Nigerian youth have been able, so far, to side-step these landmines by building an authentic mass movement that cuts across the divides of creed or ethnicity.

They were able to achieve this by channeling their frustrations against police brutality into a call to action. Many Nigerian families bear a scab [45] from the atrocities [46] inflicted by SARS.

By anchoring the message of their movement on this widespread anger [47], the youth were able to mobilise [48] — even defying heavy downpour [49] — and channel the otherwise depressing victimhood into peaceful [50] mass action.

In addition, the #EndSARS protests is an organic movement, decentralised but well organised, with protesters taking shifts [51].

This means a horizontal power structure among peers without a centralised hierarchy. The movement is neither tied to the apron of any trade union [52] nor panders to the whims of any celebrity or social media influencer.

Hence, no individual has [53] the mandate to call off the protest unilaterally.

Sadly, the opposite, a vertical power structure was the undoing of the #OccupyNigeria [54] movement, a national protest against the hike in gas price in 2012.

The Occupy Nigeria protest hit the rocks when organised labour and some leaders of the movement entered into an agreement with the government, leaving their followers shriveling in the cold.

Eventually, the protest simmered down while some of protest leaders got government appointments.

In 2012, you, me and a few friends sat in the middle of ketu ojota expressway demanding good governance. After the journey we all went back to your house for lunch. You said no one can ask you to stand down because Nigeria must change. Nigeria didn't change, YOU changed. https://t.co/e03OMGkMwL [55] pic.twitter.com/mcPYdytCfR [56]

The organic equality of all protesters within the #EndSARS movement is a great asset.

It has equally neutralised the scheming of some Nigerian “power merchants [58]” who have tried [59], albeit unsuccessfully, to usurp leadership [60] of the protest or centre [61] the movement around themselves, for personal gains [62].

The apparently “lazy” and frivolous Nigerian youth are working more effectively than their predecessors.

Regardless of how the #EndSARS protests pan out, for the mere fact that the once-derided youth are now at the forefront of upturning societal injustice is already victory.

Proud of this country. I no longer believed Nigerians could get up, for real, anymore, for anything. Cynical, apathetic and self-defeating. And yet here we are, a genuine uprising. #EndSARS [4] #EndSarsNow [63] https://t.co/MfMVVONRIR [64]

The aspirations of Nigeria’s founding fathers as encapsulated in the national anthem: “help our youths the truth to know” seem to have been granted.

Nigerian youth, desirous of a brighter future and a better country, have birthed a unifying movement. Nigeria’s divisive old guard should be afraid — very afraid!