After three months of anti-government protests in Bulgaria, what’s at stake?

An opposition leader was barred from a public beach; now, people want change 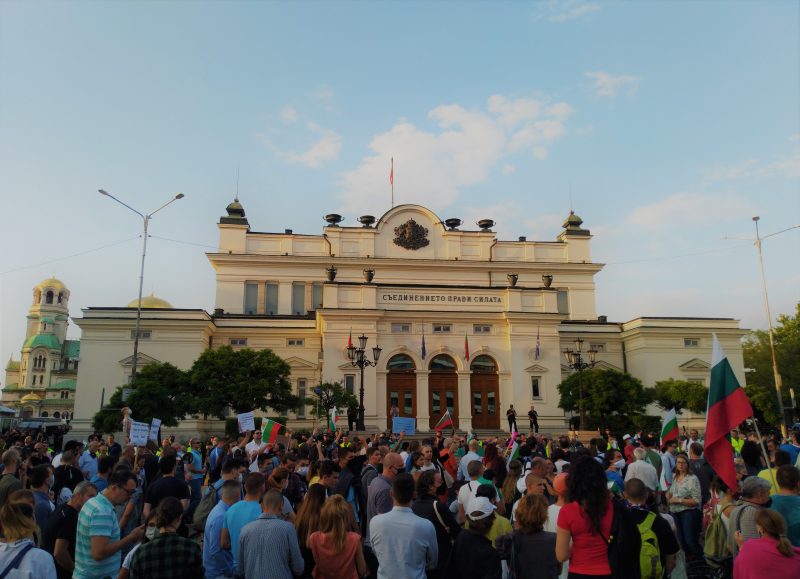 Protest in front of the Parliament in Sofia, Bulgaria on July 15, 2020. Photo by Veni Kojouharova, used with permission.

The evenings in Sofia's Independence Square have been noisier than usual this summer. Crowds have been gathering at this spot in front of the parliament since early July. “Ostavka,” they chant; it means “resignation” in Bulgarian.

What started as outrage at a prominent politician who treated a public beach as his private property evolved into mass nationwide demonstrations demanding the total overhaul of a political system perceived as corrupt and inefficient.

The rallies are the largest witnessed in Bulgaria in almost a decade — in Sofia, they have attracted up to 30,000 people at times, according to different estimates. Smaller protests have also been taking place in other Bulgarian cities as well as abroad. A poll by Sova Haris, a private survey company, showed that 70 per cent of 1,000 people interviewed supported the protests.

It all began on July 7, when the leader of the opposition party Yes Bulgaria, Hristo Ivanov, attempted to plant a national flag at Rosenec, a beach located in a public park. By law, public parks should be accessible to all Bulgarians, and Ivanov wanted to test whether his rights would be upheld at Rosenec.

Live-streaming his flag-bearing mission on social media, he approached the beach by boat, as no open roads connect to the area. As soon as he stepped foot onto the beach, he was approached by security guards. After a tense discussion, they shoved Ivanov into the water.

The guards were patrolling the summer residence of Ahmed Dogan, the honorary leader of the Movement for Rights and Freedoms (MRF), the political party representing Bulgaria's Turkish minority.

A former state security agent during the communist times, Dogan has remained an influential figure in Bulgarian politics to the present times. He's seen as a key ally of Prime Minister Boyko Borisov, and Hristov calls him the “patient zero of lawlessness in Bulgaria.”

Later, it was revealed that the guards were also law enforcement agents, whose salaries are paid for with taxpayers’ money.

Below is a short version of Ivanov's live stream:

The affair became known in the media as “Dogan's Saray” (saray being “palace” in Turkish) and, predictably, was met with public anger. But like other scandals before it, the saray affair could have easily followed a cycle so familiar to Bulgarians: It dominates the headlines for a couple of weeks before it slips into oblivion. This time, however, things turned out differently.

A significant turning point was when Chief Prosecutor Ivan Geshev ordered a raid of the presidential office, supposedly in retaliation of President Rumen Radev's remarks condemning the private occupation of Rosenec beach. Geshev is seen as a close ally of Dogan, while Radev, from the opposition Bulgarian Socialist Party (BSP), is an outspoken critic of the government.

Three hours after Geshev's men barged into the presidential office, people were out at the Independence Square in the first of the many protests that would come.

For many Bulgarians, the protests aren't necessarily in favor of Radev, but of democratic institutions and accountability. The chants are directed against Borisov and Geshev, but also call for judicial reform and a clear separation of the powers.

Dimitar Bechev, a researcher at University of North Carolina and frequent contributor to Al Jazeera, CNN, Foreign Policy and OpenDemocracy, tweeted of one of the demonstrations:

“We want no BSP, we want no GERB. We want change.” – protest directed against both the governing center-right party and the Socialist opposition.

Antoaneta Dimitrova, a political scientist at the University of Leiden, also commented:

#protests in Bulgaria continue. For context, this is not the first time that people protest about the shadow power of oligarchs using and controlling state institutions for own gain. It is encouraging that protesters, many young, understand this is not what democracy is, but 1/

In 2013, protests erupted across Bulgaria following the controversial appointment of Delyan Peevski as chief of the State Security Agency. Peevski's appointment was eventually revoked, but he remained an influential figure as a media magnate. He allegedly has links to the Bulgarian mafia, who reaches deep into Bulgarian institutions.

At that time, demonstrators were left disenchanted; in the end, one corrupt government was replaced with another. After learning that difficult lesson, this time protesters are demanding more than individual resignations. But it remains to be seen whether real change will come through.