The 12 activists are now detained in Shenzen 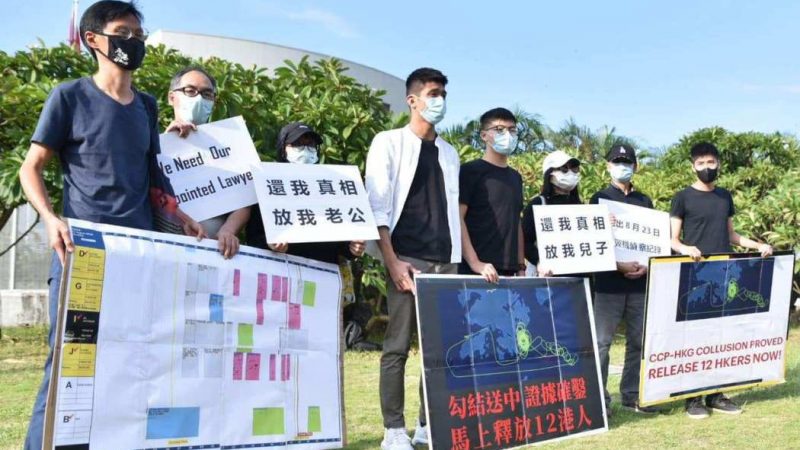 The Hong Kong police had previously denied knowledge of the activists’ escape plan to Taiwan by speedboat and claimed to have learned about the arrest only on August 28 upon notification by mainland Chinese authorities.

But evidence surfaced this week suggest that the Hong Kong authorities were aware of the plan and may have assisted mainland Chinese authorities in the arrest operation.

Aged between 16 to 30, the 12 activists had been previously charged in Hong Kong with crimes ranging from police assault, arson, and rioting to collusion with foreign forces for their protest activities in 2019.

Penalty for those crimes could be up to 10 years in prison, in the case of rioting, or life imprisonment in the case of collusion with foreign forces under the newly-enacted national security law.

While they were on bail, the 12 activists attempted to flee Hong Kong by speedboat to Taiwan, where they would seek asylum. They were arrested by the Chinese coast guard and charged with illegal border-crossing. They are now detained in Shenzhen.

The 12 have been incommunicado since their capture and lawyers hired by their families were denied visits.

Since the arrest, activists in Hong Kong have been hunting radar records from nearby vessels and other available information to verify whether the speedboat was indeed captured in Chinese waters — if proven otherwise, the arrest would be deemed illegal.

This week, Apple Daily News obtained records from a flight-tracking application called Flightware which indicate that a fixed-wing B-LVB government-owned aircraft tailed the activists’ speedboat on August 23 until they were outside of Hong Kong waters.

Activist Joshua Wong, who is a member of the concern group “Save HK 12 youth,” posted the news on Twitter:

GFS refused to comment on the story. Chief Executive Carrie Lam reaffirmed on October 6 that the Hong Kong government has had no role in the arrest of the 12.

Two days after Apple Daily News’ story was published, “Save HK 12 youth” received the flight logs of the fixed-wing B-LVB aircraft showing it was involved in a GFS operation on August 23:

Internal document proved that HKPF involved in GFS operation on 23 Aug morning. The Government Directory has deleted the contact details of the entire Operations Unit of GFS from its telephone directory.#save12hkyouths pic.twitter.com/inVNbx079J

Joshua Wong highlighted that the mission was marked with “P-OPS,”  an abbreviation for “police operations”:

2.2/ Time record of mission coincided with that of speedboat;

On October 8, the concern group and the activists’ families staged a protest outside the GFS demanding a full explanation of the August 23 flight mission:

Protest of families of the 12 detained in Shenzhen outside the government flying service headquarters; soon surrounded by police pic.twitter.com/I0WjCqRXIS

The mounting evidence has led many more Hongkongers to believe that the police has assisted with the detention of the 12 activists by China, where the chances of them facing a fair trial are slim:

It’s obviously that hk gov knew the details of this event but they are lying now. It seems that hk police planned with ccp’s authorities to kidnap the 12 hk youth. That’s absolutely ridiculous. Please #save12hkyouths ?? pic.twitter.com/49J0JJq1RT