Protesters went to five schools and the Ministry of Education 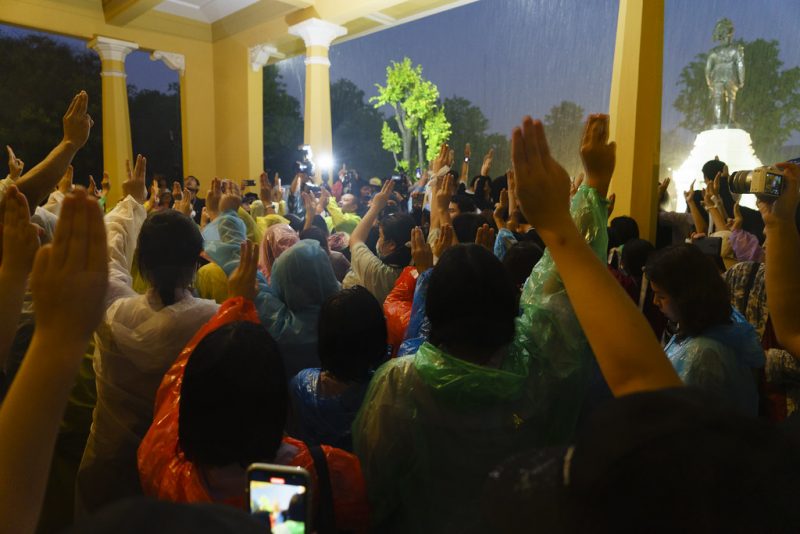 Protesters gathering in front of the steps to the ministry building to escape heavy rain. Photo and caption by Prachatai. Used with permission.

This edited article is from Prachatai, an independent news site in Thailand, and was edited and republished by Global Voices as part of a content-sharing agreement.

The student activist group Bad Student organized a series of protests on October 2 at various high schools in Bangkok to protest against the abuse and mistreatment of students in schools. Afterward, the group went to the Ministry of Education to call for Education Minister Nataphol Teepsuwan to resign.

The protesters rode a truck and unfurled banners as they visited five high schools throughout the afternoon: Samsenwittayalai, Triam Udom Suksa, St. Joseph Convent, Debsirin, and Wat Rajabopit, all of which have been the subject of reports alleging that teachers abused and harassed students.

The students submitted letters to the principals of each school calling for an end to the use of violence against students. They also put up banners detailing the abuse that has happened at the schools, including incidents of teachers hitting students or snapping students’ bra straps as punishment for dress code violations. 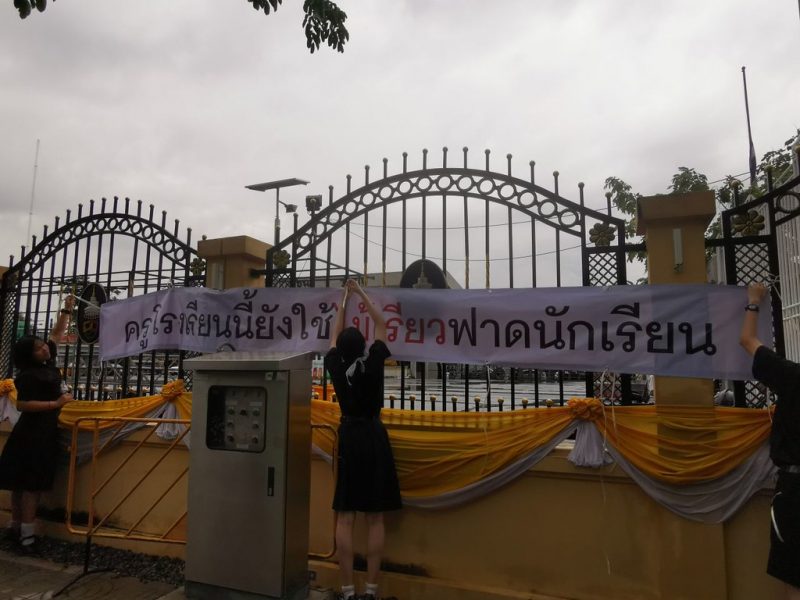 Students put up banners in front of the Wat Rajabopit School which said “Teachers at this school still hit students”. Photo and caption by Prachatai. Used with permission.

A representative of students from Wat Rajabopit high school also mentioned that the police tried to stop them from staging the protest, claiming that the school is within 150 meters of the Grand Palace, where public gatherings are not allowed under the Public Assembly Act, and also that the protest would block traffic.

At 5:45 p.m., the protesters arrived at the Ministry of Education in the heavy rain which began earlier in the afternoon and parked their truck in front of the Ministry. Education Minister Nataphol was reportedly in another province and Permanent Secretary Karun Sakulpradit came to meet the protesters instead.

The organizers then read out the resignation letter they wrote for Minister Nataphol, and called for him to resign due to the poor administration of his duties as Education Minister, his failure to stop the human rights violations against students in schools, and for being involved with the People’s Democratic Reform Committee (PDRC) protests.

[The PDRC led large rallies in 2013 and 2014 and opposed the holding of elections. Instead, they pushed for the appointment of an unelected ‘People's Council’, which many believe is contrary to democratic principles]. 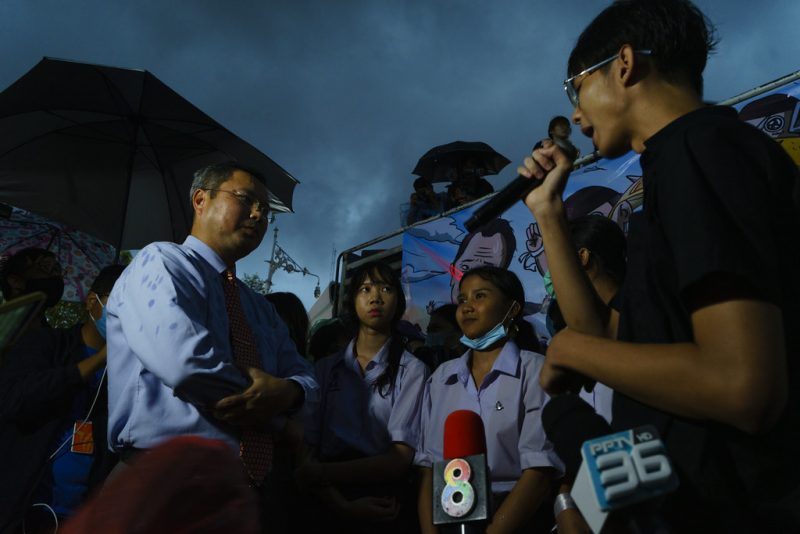 Due to the heavy rain, protesters moved inside the Ministry, where they sang the national anthem while holding their hands up in the three-finger ‘Hunger Games’ salute, now seen at the majority of anti-government protests in Thailand. They also threw piles of the resignation letter onto the steps in front of the Ministry building.

Laponpat Wangpaisit, a member of the Bad Student group, told the Education Permanent Secretary that they were making the same demands they made a month ago: an end to harassment of students, the abolition of outdated rules, and education reform, alongside demands made by students at various schools, which, according to Laponpat, the Ministry has yet to act on despite their promises.

Laponpat said that the abuse case at the Sarasas school [where a teacher was caught on video physically abusing a kindergarten pupil] is only one among thousands and asked why it is not possible to start making schools safe now. Laponpat said:

The question is these things happened, but you would have no idea about them if students weren’t speaking out. I’m talking to you as a representative of Minister Nataphol, because I believe that something should be done already, not just making promises, and in the end these things continue to happen and are not getting any less frequent.

17.45 As the protesters arrived at the Ministry of Education. Laponpat Wangpaisit, a member of Bad Student made a performance, conversing with Nathapol Teepsuwan about the problems that students have been facing.#ขับรถแห่ไปกูจะไปไล่อีณัฏฐพล#whatshappeninginthailand pic.twitter.com/qQleB2kqv5

An official from the ministry gave this response as reported by the media: “We received the petition from the students and will investigate them.”

A Year 10 student at Samsenwittayalai School who participated in the protest told Prachatai that the problems students face at their school include haircut rules which violate students’ rights, a curriculum which does not fit the students’ needs, and teachers abusing students, something which is seen as normal by society.

She also said that a teacher once pulled on her hair and made her run laps around the field because her hair was too long and because she had a fringe. This student said that she has been to two protests and said that her family supports her participation in the protests because they see that it is not right that young people have their rights violated in schools. However, she said that many other families are not like this and that she has friends who have gone to protests and were disowned by their families. She added:

It’s understandable that some homes do not understand. Many are like that, but I’m happy that my parents are open to listening to the problems of my generation and listening to me, and don’t just base things on their own opinion. I actually want other parents to be able to think like this too. I have sympathy for others in my generation, others who face the same fate, who not only have their rights violated by their schools, but also have their feelings hurt at home.

Another Samsenwittayalai student who joined the protest said that she had been punished for violating the school dress code and haircut rules, and faced other abuse at school. Until she attended a class on law and realized that what was done to her was illegal and became more aware of her rights. She also said that her family supports her participation in the protest because they see that the issues she faces have been a problem for a long time. She added:

(In the class), we talked about human rights violations and about society and politics. We were debating, because we already know what the problems are, so we talked and tried to find a solution, but we couldn’t find any, because we are the ones who are oppressed and we can’t do anything to them.