‘Life and Limb’: Foresters on the front line of climate change in Vanuatu 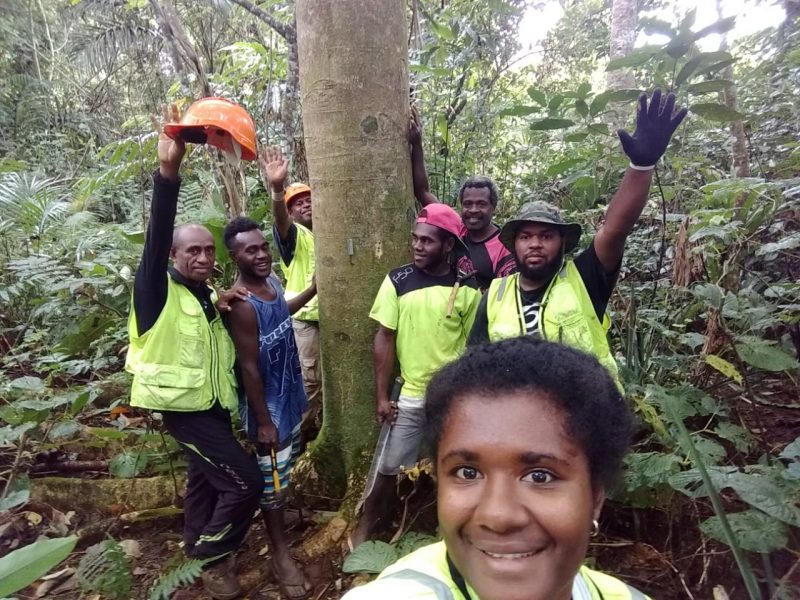 One of the films being screened at the ongoing 2020 Eugene Environmental Film Festival is ‘Life and Limb’ which features the work of foresters in Vanuatu.

The Eugene Environmental Film Festival highlights initiatives around the world that share  “a deep connection and responsibility to protect the environment and work in solidarity with others in the struggle toward environmental justice.” This year the festival is free and all films are screened online.

Vanuatu is a South Pacific nation of 80 islands. It is extremely vulnerable to climate change, in particular the threat posed by rising sea levels to coastal communities.

One of the environmental protection initiatives that the Vanuatu government has recently launched aims to make an inventory of forest lands on 12 major islands. This was last done 30 years ago.

Ginny Stein, a veteran Australian journalist and filmmaker, documented this work. Stein has been helping Vanuatu’s Department of Forestry as a volunteer and consultant.

Global Voices emailed Stein and asked what inspired her to document the work of the foresters:

After a long career as a foreign correspondent and film maker, I moved to Vanuatu to work as a volunteer in communications at the Department of Forestry.

The National Forest Inventory kicked off while I was there. I thought it was a great chance to teach foresters about the power of media in raising public awareness about what they do. I was fortunate to get a chance to work with them, to talk about filming using phones and tablets, before they departed for the field.

She added how her team decided to make a documentary:

They started sending me short video clips which I would turn into social media videos and post on the forestry Facebook page. At the same time, I had the chance to meet up with them in the field, on a number of islands where I would film with them. Over the course of six months, I realised we had enough material to make a documentary, which is how ‘Life and Limb’ came together.

The documentary follows a team of foresters who are part of the government project to make an inventory of the forest lands and offers a glimpse into their battle against climate change. It also shows the importance of the forest in Vanuatu culture and how logging for several decades has gravely affected the ecological balance in the country’s small islands.

It also narrated the impact of the rise in cash-crop demand on Vanuatu’s agricultural and forest lands.

For the past year I have worked with the Forestry Department of Vanuatu to help protect one of this South Pacific Island's most unique and valuable resources….its forests. Foresters became camera operators as they began the first stocktake of the island's forests in more than 30 years. The proof of everyone's efforts…a documentary "Life and Limb" will be launched next week at the Australian High Commission in Port Vila. For the past few weeks, we have all watched from here in horror as Australia's forests have burned. Vanuatu, a small pacific island on the front lines of climate change, is one of a number of island countries that has chipped in to help Australian firefighters. This documentary is about Vanuatu's forests, but it highlights the value of forests to people's lives the world over. Tankio tumas olgeta blong Vanuatu and all who helped make it. #forestartist #forestmapping #forests #conservation #lifeandlimb #climateemergency #wildlife #wildseas #kauri #nabunga #forestry #climatechange #climate #sustainability #theworld #camera #documentary

A post shared by VanuatuForestryDepartment (@vanuatuforestrydepartment) on Jan 6, 2020 at 7:49pm PST

Stein explained some of the challenges faced by the foresters:

For the teams, the biggest challenge was getting to where they had to go, by boat, truck, or foot. And the weather. They were reliant on the support of communities. For me, connecting with them was the greatest challenge. And data is really expensive in Vanuatu.

The film was screened in Vanuatu in January 2020. Stein shared the feedback of the audience:

Showing the film the first time and watching the reaction of foresters was priceless. There was lots of joy and pride in what they had done. And a thrill of seeing themselves on the big screen. Taking it into communities was very rewarding. At Hog Harbour in Santo, people watched it at an outdoor screening. There was laughter and joy at seeing ni-Vanuatu working for their country. People really loved the music as well. I was lucky that Vanuatu's Cultural Centre gave me access to some of their archived music and that the Soul Harvest Choir also allowed me to use some music I recorded with them.

My message is please watch “Life and Limb”, and please support those on the frontlines of climate change who are working hard knowing there are great challenges coming their way. You can do that by taking action yourself, wherever you are. By learning more about climate change, and calling on your representatives to start taking action now.

The whole film can be watched by visiting the website of the Eugene Environmental Film Festival. Watch the film’s trailer here: