The country's electoral commission has annulled the official results 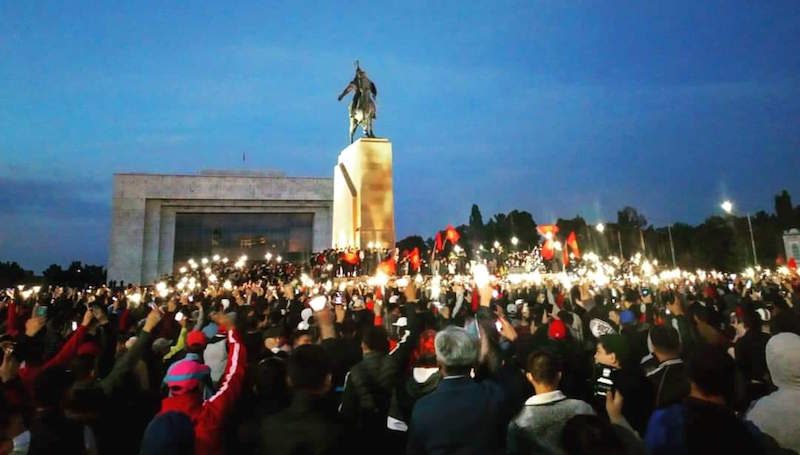 Mass protests against electoral fraud in Kyrgyzstan have overthrown the country's government.

On October 4, this Central Asian country of 6.3 million voted in parliamentary elections. Kyrgyzstan is known for its fractious politics; some 16 parties competed for 120 seats in the country's unicameral parliament. But opposition voters were in for a disappointment. The Central Electoral Commission's (CEC) preliminary results counted 1,942,609 votes and indicated that just four of these 16 parties had passed the threshold of seven percent: Unity (24.9 percent), My Homeland Kyrgyzstan (24.27 percent), Kyrgyzstan (8.89 percent), and United Kyrgyzstan (7.19 percent). The final turnout was 1,980,240 people, or 56.2 percent of those included in voter lists. A manual vote count conducted on October 5 showed much the same results, although a fifth party, Mekenchil, also entered parliament with 7.26 percent of the vote.

All the remaining parties still got less than seven percent of the vote.

The parties which managed to clear the threshold were all pro-government parties linked to powerful figures in Kyrgyzstan's ruling political elite. For example, Unity is associated with President Sooronbay Jeenbekov and his brother is among its candidates. My Homeland Kyrgyzstan is linked to former Deputy Head of Kyrgyzstan's customs service Raimbek Matraimov, who is at the centre of an international investigation into the withdrawal of almost US$700 million from the country.

These elections also marked the tenth anniversary of Kyrgyzstan's transition to a semi-parliamentary republic. Erica Marat, an Associate Professor at the International College of Security Affairs in Washington DC, noted that despite this change, the most influential political parties tended to dominate elections. They were strongly associated with their patrons, internally divided, and had no substantial ideological distinctions, she explained:

By then it was also apparent that a representative parliament =/= more democratic legislature. Lots of laws limiting civic and economic freedoms were passed

Opposition supporters felt cheated. The Social Democrats were the first opposition party to announced that they refused to recognise the result of the election, announcing a protest on the night of October 4. The Republika and Ata-Meken parties then held a joint briefing and asked their supporters to join the demonstrations.

Accusations of electoral fraud were raised widely across social media. Many of these were connected with so-called Form No. 2 votes, which the head of the CEC Nurzhan Shaildabekova described as “a progressive norm which allows the voter to vote not at their place of registration, but wherever is convenient for them”. Shaidilabekova stressed that 481,950 such applications were registered ahead of the October 4 vote. Lawyers sounded the alarm at this large number and appealed to the CEC, Prosecutor Generals's office and law enforcement agencies to investigate the matter. “Every case of mass registration of citizens in Form No. 2 and every report of voter bribery should be the subject of a thorough, objective, and prompt investigation,” the lawyers stated in an open letter.

Reports that political parties were bringing voters from regions or villages and registering them at polling stations in Bishkek had started to appear online as far back as early August. One voter told journalists of 24.kg that he was promised 4,000 Soms (US$50) to vote for My Homeland Kyrgyzstan. He continued that he was told to submit an application via Form No. 2 in order to change his electoral address, then handed a completed form and brought by minibus to a polling station located in a school.

On election day, social networks were full of complaints by voters about bribery by Unity and My Homeland Kyrgyzstan. Voters claimed that they were offered between 1,500 and 5,000 Soms ($19-63) for voting “correctly”.

For many voters, electoral fraud may have been the last straw. In recent years, the country has been rocked by incessant corruption scandals and political instability. People's discontent grew and accumulated. Against the backdrop of the COVID-19 pandemic in Kyrgyzstan, which peaked in July this year, President Jeenbekov's popularity declined sharply, although even before the pandemic, his actions and team were often criticised. The country had one of the highest per capita death COVID-19 rates in the world, and the quarantine cut a fifth of the budget. Civil society accused his government of inaction, and some even called for the president to be impeached.

All this meant that the opposition's calls for change found a sympathetic audience.

On October 5, supporters of eleven parties gathered in Ala-Too square in central Bishkek to voice their anger at the official results. By three o'clock in the afternoon, there were more than 4,000 of them. As the crowd grew, leaders of 11 parties signed a statement to the CEC to demand a re-run of the election.

As the night progressed, the crowd grew in size and ambition. Some protesters attempted to climb over the fence of the White House, the office of Kyrgyzstan's President. Law enforcement took this as a sign to crack down. Thus the peaceful rally turned into violent clashes between citizens and security forces, turning the centre of Bishkek into a battlefield. Shots rang out alongside the cries of wounded people for help. Well over 70 injured people were admitted to various hospitals in the capital, among them opposition candidates.

Despite the police use of rubber bullets and tear gas, protesters eventually prevailed. By 3 o'clock in the morning, they had seized the White House, parliament, and various other administrative buildings.

Protesters are inside President Jeenbekov's office.

President Jeenbekov had left the building an hour before the invasion.

Japarov has since replaced Kubatbek Boronov as interim Prime Minister of Kyrgyzstan, as part of a coordination council. The speaker of the Kyrgyz parliament Dastan Jumabekov has been replaced by Myktybek Abdylbaev of the Bir Bol opposition party. The mayors of Osh and Bishkek, the two largest cities in the country, have resigned.

For his part, Jeenbekov is staying in office — for now. In an October 6 interview to the BBC, he stressed that he was the legitimate President of Kyrgyzstan but insisted that the way forward had to be led by peaceful negotiations. Jeenbekov had strongly criticised the protests, but recently told Kyrgyz media that he had ordered security services not to open fire on demonstrators.

On the evening of October 6, the CEC announced that it had officially cancelled the election results “to prevent tension”.

In the chaos, a power vacuum has opened up, hardly for the first time in this country's history. The country now watches to see who will step into the brink.