The favorite to occupy the post is Reverend Peter Choy, a notably pro-Beijing voice in Hong Kong 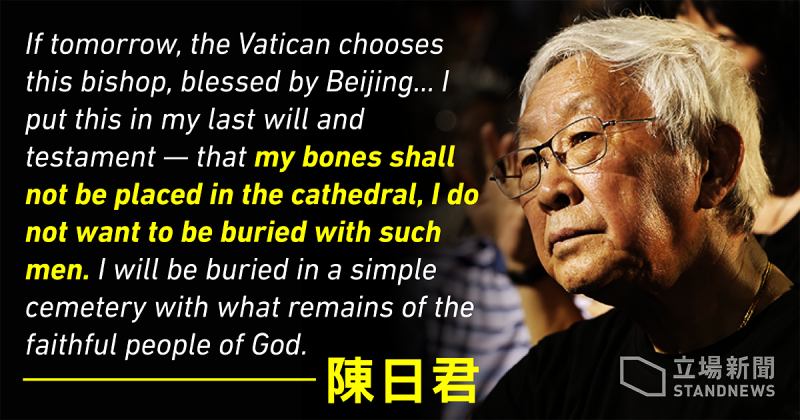 Vocal Beijing critic Cardinal Joseph Zen returned to Hong Kong from Rome on September 28 after failing to meet Pope Francis, to whom he intended to object the possible appointment of a pro-Beijing bishop to lead the Hong Kong diocese.

The Hong Kong Bishopric has been vacant since the death of Bishop Micheal Yeung in January 2019. While retired cardinal John Tong Hon serves as interim bishop, the pending appointment of the permanent position has been engulfed in tension as Beijing tightens its grip on the semi-autonomous territory.

Yeung's Auxiliary Bishop Joseph Ha, who holds favorable views towards Hong Kong's pro-democracy movement, is the favorite choice of local Catholics. In February, however, the media reported that the Vatican intended to nominate Reverend Peter Choy for the position, who is notably pro-Beijing.

After facing criticism from Hong Kong's Catholic community, the Vatican deferred the announcement of the new bishop. But as the Holy See normalizes relationships with Beijing, many Hongkongers fear that Choy's appointment will soon become reality.

China severed relationships with the Holy See in 1951 after the latter established ties with Taiwan, but have warmed up to it since 2018 with an agreement that allows the Vatican to appoint bishops in the country. The agreement, whose details were never made public, expired in September 2020, but renewal is in progress.

Currently, the Holy See’s Secretary of State Cardinal Pietro Parolin is trying to arrange a meeting with Chinese Premier Li Keqiang in what would be an unprecedented development between the two governments. Furthermore, the Vatican allegedly has plans to open a Beijing office.

The Holy See's agreement took a whole new significance for Hong Kong with the enactment of the national security law, which has faced opposition from broad sectors of Hong Kong society, including the Catholic community. A day after the law entered in force, the president of the Federation of Asian Bishops, Cardinal Charles Maung Bo published a statement saying the law “seriously weakens Hong Kong’s Legislative Council and Hong Kong’s autonomy” and “radically changes Hong Kong’s identity.”

It is against this background that Zen, who is 88 years old, decided to take the journey to Rome. Despite failing to meet with Pope Francis, he managed to deliver a letter to one of the Pope’s special secretaries.

Diane Montagna, an Italian correspondent in the Vatican City, posted an English translation of a story by Italian reporter Aldo Maria Valli about Zen’s visit:

CARDINAL ZEN IN ROME: “I asked for an audience with Francis, but not even a nod from Santa Marta” https://t.co/UGVKdFFVsy

Aldo Maria Valli sits down with ++Zen during visit to Rome, where he hoped to speak with @Pontifex.

Translation below with kind permission of AMV. pic.twitter.com/1fAk5yoeWe

In the interview with Valli, Zen said:

The idea was to appoint Bishop Joseph Ha, the auxiliary. Now instead the odds of Monsignor Peter Choy’s — he is one of the four vicars, who is too close to Beijing — are increasing. In the letter, I warned the Pope: appointing Choy will be a disaster. I remained [in Rome] for the time permitted, but not even a nod from Santa Marta.

Zen also criticized the secret deal between China and the Holy See:

It is inconceivable that it has remained secret even for those who deal closely with these matters… in Beijing not everyone wants the accord to be ratified. There is one component of the [Communist] Party that does not want agreements: they are the most hardline, those for whom the Church must simply be controlled and, if necessary, crushed, without agreement of any kind…Thinking one can make deals with Beijing is folly. You don’t make a deal with the devil. You just fight the devil! The Church does not take orders from governments, and this applies everywhere.

And he also shared photos of the trip on Twitter after returning to Hong Kong:

In June, when Beijing first revealed its plans to by-pass the Hong Kong legislature and enact the national security law, Hon said in an interview with a Catholic newspaper that he “understood” Beijing’s decision and believed that “the law will not affect freedom of religion in Hong Kong.”

The interview was published only a few days after Hon attended a closed-door meeting organized by Hong Kong's China Liaison Office in which Beijing officials urged religious leaders to express support of the national security law.

In August, the education committee of Hong Kong's Catholic Church sent a notice to all primary and secondary Catholic schools urging administrators to prevent politicization on campuses, as well as educate students on the national security law, the national anthem law, and raise awareness on national security.

Hon also issued a letter to the parish's priests on August 28 asking them to withhold personal political opinions during service, and stressing that it is “absolutely inappropriate” to deliver speeches that are “offensive or incite hate and social instability.”

On the same day, the Church instructed its affiliated NGO Justice and Peace Commission of the Hong Kong Catholic Diocese to stop a crowdfunding campaign to publish on Apple Daily News “a prayer to Hong Kong,” which the Church considered “politicized.”

All those gestures have been perceived by Hong Kong's pro-democracy camp as serving the interests of Beijing rather than the local Catholic community.

In a more recent interview, when asked what he would do if the Vatican proceeded with appointing Peter Choy as the new Bishop, Joseph Zen described what his last act of protest would be:

“My last act of protest will be to do just that, to now disappear w/everyone knowing why. I put this in my last will and testament-that my bones shall not be placed in the cathedral, I do not want to be buried with such men..”
–Cardinal Joseph Zen