"He was a [...] repository of our stories and our history" 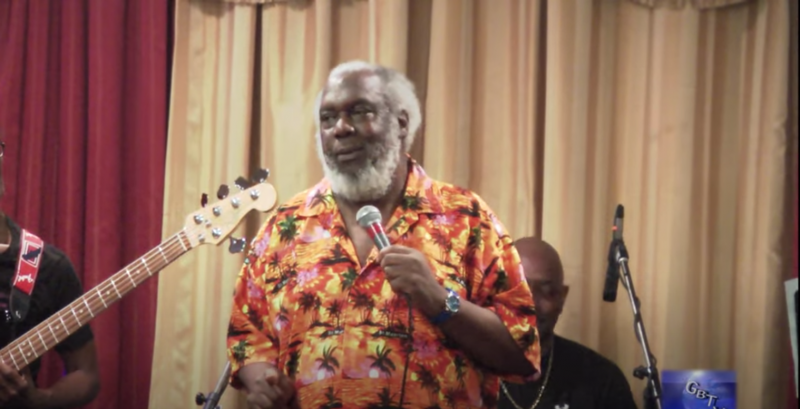 Comedian and cultural storyteller Dennis “Sprangalang” Hall on stage during the Kaiso Laugh Riot at Tropical Paradise in Brooklyn, New York, in 2016. Screenshot taken from a YouTube video uploaded by Gentle Benjamin.

Comedic genius and cultural historian Dennis “Sprangalang” Hall died on October 2, 2020, two days after his 71st birthday. He had been ailing for some time and his passing — which comes just five months after the death of his brother, Trinbagonian playwright Tony Hall, and about two weeks after the death of actor Nigel Scott, a stalwart of local theatre — leaves a gaping hole in Trinidad and Tobago's artistic community.

Best known for his portrayal of Draxi, a character on the “Cultural Sprangalang” segment of “Gayelle”, a cultural magazine series that helped local television forge a strong Caribbean identity during the mid-1980s, Hall was passionate about passing on knowledge of the history and culture of Trinidad and Tobago.

Upon learning of his passing, Wired868 republished a 1994 interview Hall did with journalist Vaneisa Baksh, which revealed the genesis of his most enduring character:

Hall was responsible for a quiz segment about Trinidad and Tobago [on ‘Gayelle’] and they had to find a name for it.

At an arts seminar [several theatre stalwarts, including Dennis’ brother, Tony Hall] jumped out of a coffin to dramatise their grievances. At the same time, there was a midnight show called Dracula and the star was called ‘Draxie’.

Gayelle’s quiz character became Draxie. He would step out of an upright coffin, dust himself and ask his questions—but the segment still needed a name.

‘One night some fellas […] playing basketball, tell me they in a party—they drink, they smoke, they eat till they head was sprangalang.’

The segment became Cultural Sprangalang until the character took over and was rechristened.

Though Sprangalang would become “a national figure”, Hall also starred in various theatrical plays and other productions, including director Frances-Anne Solomon's feature film “A Winter Tale” and the Canadian sitcom “Lord Have Mercy!”

Although rumours about his death had been circulating online a few days before he actually passed, social media users were still shocked at losing him.

On Facebook, media producer Nigel Thompson remembered Hall as a “great comedic mind [and] even greater intellectual and historian [who] embodied everything Trinidad and Tobago needed in this moment”. Photographer David Wears added also in a Facebook post:

He claimed [Trinidad and Tobago] as his home by teaching us WHO we are, and those who listened learned so much.

The value of Hall's contribution was not lost on actor and Rapso musician Wendell Manwarren, who noted in a Facebook post:

Cultural Sprangalang was a national treasure, a master storyteller and a philosopher of the highest order. He was a living walking repository of our stories and our history and he was possessed of a searing honesty and a sense of humor beyond compare. He dared to be true to himself and afforded us the opportunity to grapple with hard truths while laughing hard and shaking our heads in knowing. Thank you Dennis Sprangalang Hall for the example and the knowledge and wisdom over the years. A true hero, a real Griot and a Giant of a man. Rest In Everlasting Peace my brother ?. Your stories will live on.

A griot is a storyteller in the West African oral tradition.

The National Drama Association of Trinidad and Tobago (NDATT) also mourned his passing, describing Hall's cultural contribution as “vast and invaluable”. The Trinidad Theatre Workshop, meanwhile, recalled how Sprangalang could “tell a story”:

He had the facts, he articulated the ideas in a vernacular way of thinking and talking […] He was our identity, he was a creole griot. A historical raconteur who spoke the nation language in a way that was universal. A comedian who made us think. He was our [Richard] Pryor without the cussing. He lit up a space with an intelligent wit and a respect for our heroes.

Niala Maharaj, who worked with Sprangalang on the “Gayelle” programme, paid tribute to him on Facebook:

Our show had launched him onto the national stage. He was brought in to do a regular feature, named it ‘Cultural Sprangalang’, and the rest is legend. […] He saw and perceived things in a completely original way. We often had to stop a Gayelle shoot because the cameraman was laughing so hard he couldn’t keep the camera straight. Funny things poured out of Dennis’ mouth in a constant stream, like water out of a natural spring.

Dennis’ very life has been a challenge to conventional wisdom. He seems to completely inhabit the quasi-vagrant, slippers-dragging, towel-shouldered Sprangalang persona he invented. But he comes from an educated middle-class family: his father was vice-principal of Naparima College, its Classics master, teaching Latin and Greek. And Dennis himself draws on a rare store of knowledge he carefully garners. You can’t predict which direction his mind will take at any given moment.

Maharaj confessed to always being a bit intimidated by Hall, but when, on one occasion, he defended her in a production meeting, she realised that “inside the vagrant persona was a knight in shining armor”, ready to stand up for whoever and whatever he thought was right.

His mind was lightning quick: he would silence hecklers as easily as he would take clever swipes at cultural promoters who profited off of artists like himself, but never gave them their due.

In that vein, writer and activist Tillah Willah wrote of his passing:

The full story of Sprang’s contribution has not been told and so we grasp the few fragments of his genius that can be found online. And in the absence of a nine nights we seek out those timelines that have stories of encounters with this giant of a man. […]

Imagine, if models like Gayelle and Banyan had been given the support to thrive, what could have been. Every death is an unknowing, every loss is a library burnt to the ground by our piecemeal and contemptuous approach to legacy preservation. How many young people under 20 know Sprang’s name or see the connection between their generation and people like him? Who cares about finding new ways to make this information accessible? Who is paying to digitise the archives? What a wealth of information that is at risk, under threat, that we continue to deem unworthy of our oil and gas millions. Meanwhile the same institutions that refuse to invest in heritage preservation are circling cobos [vultures] wailing about lost icons. […] It’s like losing him twice.

Those who did understand the full measure of Sprangalang's legacy, however, deeply mourned the loss. His longtime friend, sound engineer Robin Foster, posted a tender farewell:

Thank you for the pure joy of all the laughs, all the roaming Trinidad talking shit and limin’ [hanging out]. Thanks for all the Kaiso [calypso] and cultural stories. Thanks for single handedly keeping T&T [Trinidad and Tobago] sayings and language alive. Thanks for the archiving of Trini music and stories. Thanks for keeping up all the Oral traditions and the social [commentary]. But most or all Thank you for being my friend. Keep Looking up Dennis, Walk Good.