'They compelled me to do so' 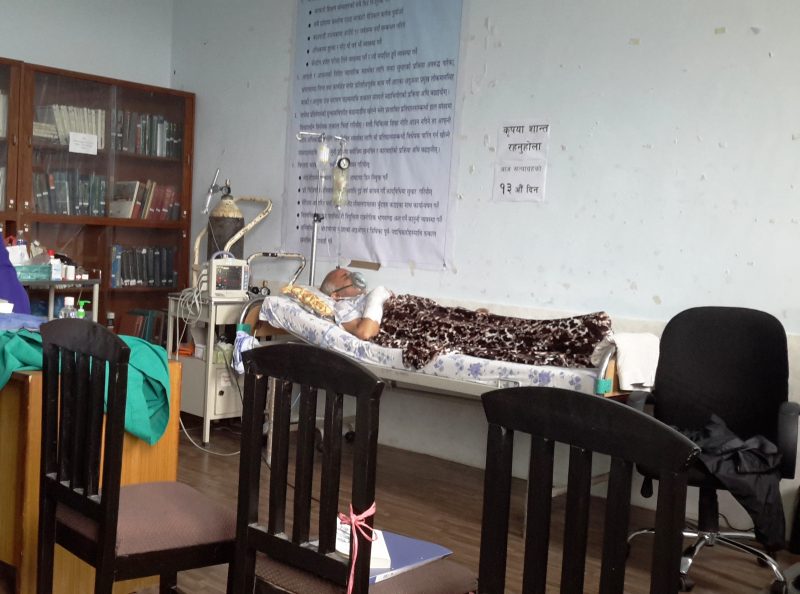 Dr. Govinda KC on the 13th day of his eighth hunger strike at the Institute of Medicine, Maharajganj. Image by Esushant via Wikimedia Commons, CC BY-SA 4.0.

On September 14, activist and retired surgeon Dr. Govinda KC — who has been routinely leveraging his own well-being to demand reform of the country's health care system — began his 19th hunger strike at a temple in Ranichaur, a village in Nepal's Jumla district.

beloved ones without access to health service. He has spend his 150 days in hunger to bring justice to people. He is in his 19th fast onto death and we call him “Pagal”

I wish I could be pagal like him. But I don’t have such strength. But why not support him and his cause,

Dr. KC's demands include providing timely treatment to both COVID-19 patients and those with general ailments, putting an end to the country's lockdown, and preventing a surge of infections by taking safety precautions. He is also advocating for medical services to be free and accessible to the public, and wants those involved in corruption in the medical sector to be exposed.

On September 22, as Dr. KC's health began to deteriorate, Nepal police forcibly took him to the National Trauma Center in Kathmandu, where he refused all treatments. Instead, he went to the Maharajgunj Teaching Hospital, where he continued his hunger strike.

In a press conference on October 1, Minister for Foreign Affairs Pradeep Gyawali urged Dr. KC to end the strike, saying that some of his demands have already been met and the government is working to fulfill the rest.

A former senior orthopedic surgeon and professor at Nepal's Tribhuwan University Teaching  Hospital, Dr. KC retired in October 2019, after 26 years of service. In the wake of several natural disasters, he was part of international humanitarian missions to India, Myanmar, Pakistan, the Philippines and Haiti. In Nepal, he has used his own savings to visit remote villages and provide free medical treatment for the poor.

Despite the fact that Dr. KC has waged several hunger strikes over the past nine years, there has been limited progress. On each occasion that the government negotiated with him and reached an agreement, he would end his strike — but the government never implemented the promises it made.

In an interview with Image channel in October 2019, Dr. KC explained:

In the beginning, I thought politicians were unaware of the challenges people in remote villages face; I later realized that politicians are not here to serve the country, but to serve their own personal agenda and make money. That's the reason I have to return to my hunger strikes, again and again — they compelled me to do so.

Staff and resources are spread so thin that many people are losing their lives in the absence of timely medical attention. The Ministry of Health has come under fire for making what many feel are irresponsible and unethical decisions with regard to the pandemic, including its decision to expand the use of ineffective rapid test kits. There have also been irregularities in the purchase of certain medicines.

In contrast, private hospitals — which are often owned by political leaders and other powerful people — are unregulated, expensive, and free to operate without government interference.

Most wealthy Nepalis, including politicians, travel overseas for medical treatment, raising questions about whether public funds are used to pay for these trips.

In a tweet addressing the unreliability of care in private hospitals, netizen Sudin Sayami, who posted a graphic in solidarity with Dr. KC, noted:

My neighbor had corona; he spent seven days in Voyoda Hospital and spent 500,000 Nepali rupees [4,270 United States dollars]; he recovered. Another neighbor who spent six days in Teku Hospital recovered and was not charged for his treatment. A relative who spent eight days in Grandi Hospital paid 1,500,000 rupees [US $12,810] died. No one was allowed to see either the patient or the dead body. That's what the crazy old man is fighting for.”

Thousands of Nepalis who have followed Dr. KC's journey — including medical doctors, politicians, celebrities and members of the public — believe that his demands are legitimate. They have therefore taken to social media platforms to support the cause, using hashtags like #IAmWithDrKC, #WearewithDrKC, and #SaveDrKc to speak out and call for action:

[The] government should fulfil Dr. KC's demands and save his life, at least for the sake of 30 million Nepalis! Such doctors may not be born again!

The National Human Rights Commission has also urged the government to protect Dr. KC's life and make public the details of agreements signed with him in the past. In addition, it has asked for a progress report on the government's implementation of the agreed-to demands.

Efforts not in vain

Despite the challenges, Dr. KC's efforts have brought about some positive changes — most notably, the passing of the National Medical Education Act, which finally paved the way for reforms and standardisation efforts in medical education.

This new legislation means that issues like admissions, examinations and fees will be decided by the country's Medical Education Commission. Scholarship quotas for medical education and the monitoring of university faculty have also been increased.

Dr. KC's ongoing journey, however, indicates that there is still work to be done: his protests aren’t being fully heard and pressing issues in the country's health care sector are still not being given the attention they deserve. Until they do, Nepal will continue to fall behind global health standard and Dr. KC will, quite likely, continue his hunger strikes.