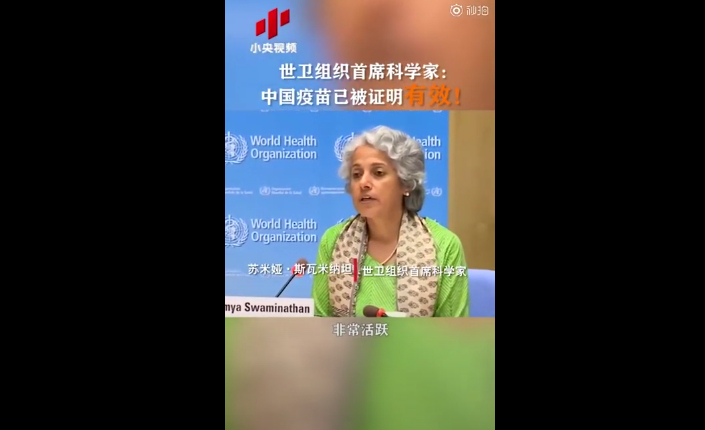 Screen capture from CCTV's video on Miaopai. Via Youtube.

This story is based research by Factcheck Lab, a Hong Kong-based fact-checking agency and a media partner of Global Voices of which the author is a member.

These reports and posts cite as a source a one-minute video produced by China Central Television for the Chinese video-sharing app Miaopai. The video shows a speech by WHO Director-General Tedros Adhanom Ghebreyesus on the importance of the development of a COVID-19 vaccine, followed by remarks by Dr. Swaminathan.

In the CCTV video, whose captions say “WHO chief scientist: Chinese COVID-19 vaccines have proved to have an effect” (世卫组织首席科学家：中国的新冠疫苗已被证明有效), this is Swaminathan's speech:

As you know, they also have a very active vaccine development programme and several of their vaccine candidates are in advanced stages of clinical trial, so this is also of interest to us, so we're following those very closely. Some of their candidates actually prove to be successful in the clinical trials that are going on.

However, Dr. Swaminathan's original speech has been edited. Her last sentence, in reality, began with the word “if,” and the video's background music makes it sound as if she's saying “proved” instead of “prove.”

We've been engaged in discussions with China for the last several months because, as you know, they also have a very active vaccine development programme and several of their vaccine candidates are in advanced stages of clinical trial so this is also of interest to us so we're following those very closely. We've had very constructive and open discussions with them and they have always been reiterating their commitment to global access if some of their candidates actually prove to be successful in the clinical trials that are going on [emphasis added]. So I think the conversations are going on, it's still open and we're hopeful that more countries are going to join.

The remarks were delivered at a WHO virtual press conference that took place on September 21. The complete transcripts of the one hour and 30 minutes event can be accessed here.

The conference aimed to present updates on the 18-billion-USD initiative by WHO and other organizations to deploy a future COVID-19 vaccine around the world. So far, 156 countries have signed up for the program; neither China nor the U.S. is among them.

As anticipated, CCTV's video, as well as the news reports and posts that it generated, have attracted a lot of patriotic endorsements. A post on Weibo by Daily Economic News has more than 337,000 likes. Below are some of the most popular comments:

I am so proud of you, my country. This is the best present for the National Day and Mid Autumn Festival.

You can’t imagine China’s speed. I am so proud of my mother country.

After fact-checkers pointed out that Dr. Swaminathan’s words had been distorted, some media outlets, including CGTN and CCTV, deleted their social media posts. Among them is the Communist Youth League of China, whose post was captured by Twitter user @Emi2020JP before it disappeared from Weibo:

Tedros should have the vaccine injection first.

Like @Emi2020JP, many Twitter users believed that WHO was assisting China with distorting the video, and posted angry comments at Tedros:

Tedros is a toilet brush!

I will pay to give Tedros a few extra injection!

Yesterday my mom told me, the domestic news said that the U.S will buy huge amount of vaccines from China. I don't even care to explain. Let them live in their fantasy.

Such excellent service, from covering up the spread of the virus to marketing China's vaccines!

Although Chinese many posts have been deleted, copy-cats are still circulating on social media, such as this public post on WeChat.

Pro-Beijing media outlets in Hong Kong, such as Speak Out HK (港人講地）and Today Review (今日正言), have also published news stories based on the video.

There are almost 200 COVID-19 vaccines in different stages of clinical trials around the world, and several of those are being produced by Chinese laboratories. None of them has successfully passed a phase 3 trial yet.