Hundreds stayed for an overnight protest camp on September 19 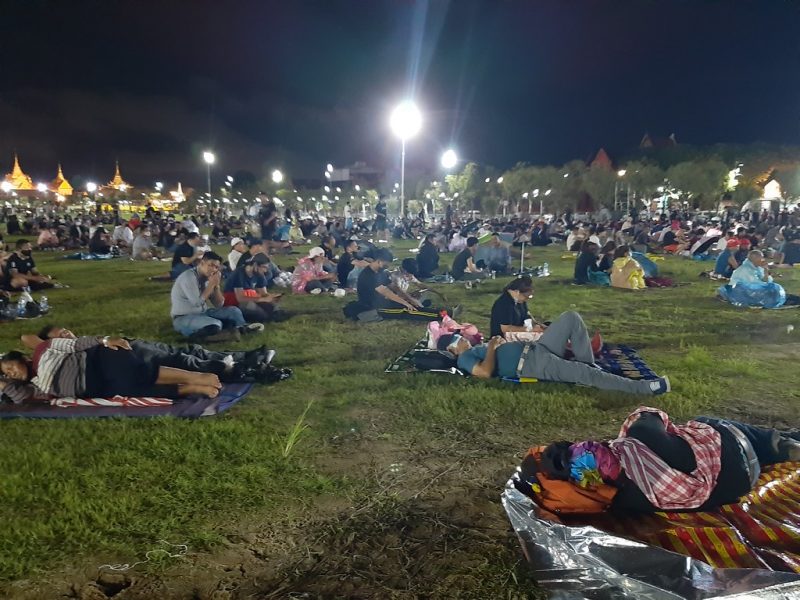 People started to lay down as the speech went on in Sanam Luang, September 19 evening. Photo and caption by Prachatai.

This article by Yiamyut Sutthichaya is from Prachatai, an independent news site in Thailand, edited and republished by Global Voices as part of a content-sharing agreement. *Some names have been changed to protect the identity of the interviewees.

On September 19, a massive protest brought thousands to Bangkok to call for reforms and the drafting of a new constitution. The day's protests carried on into the night as protesters settled down to sleep at Bangkok's Thammasat University (TU) and the adjacent Sanam Luang field.

It was the biggest overnight protest since the 2014 coup, and allowed people from other parts of the country to attend a political event in the capital as they could stay at the protest site.

At around 8:30 p.m. in TU, people could be seen queuing up to use the bathrooms, some brushing their teeth in the bushes. Some were already asleep, preparing for the march the following day.

The #19กันยาทวงอำนาจคืนราษฎร demonstration, which has now moved across the street from Thammasat University to Sanam Luang, is still ongoing, with activists such as Sirawith Serithiwat and the Bad Student group giving speeches on the main stage.#WhatsHappeningInThailand pic.twitter.com/G2JVPeLsrM

Jane*, 33, a factory worker from northeastern city Khon Kaen, travelled to Bangkok with her friends to join the protest. As she was preparing her sleeping spot on the footpath in front of the activity building, Jane explained the reason for sleeping at the protest site.

To save money, I came here with full support. As I told you, brother, the economy is not good lately. There is no OT (overtime).

She does not like the current government as the economy, living costs and many other things have not changed for the better. The COVID-19 pandemic has also threatened her livelihood as the factory already prohibits overtime (OT) work which usually equals extra income that Thai factory workers depend on to improve their quality of life. She wants the government to resign.

Across the football field from Jane stands the TU Business School (TBS) where dozens of people were sleeping. 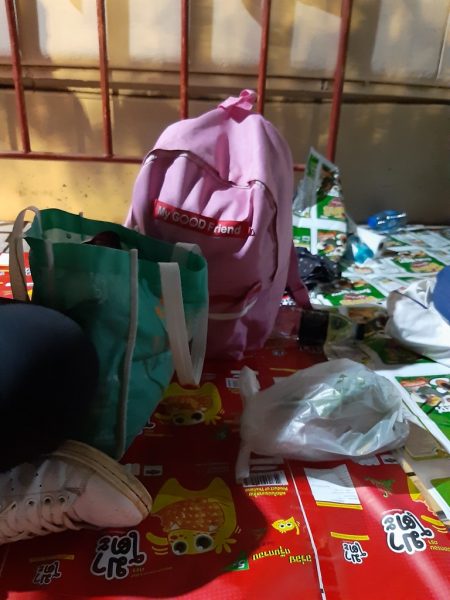 Jane's belonging for an overnight stay. Photo and caption by Prachatai. Used with permission.

“We want democracy,” said Phawat Hiranphon, a salesman from the central province of Samut Prakan who decided to spend the night with some friends under the TBS building after finding nearby hotels fully booked.

Phawat started to attend political protests in July. He said he formerly hated protests because he felt like it was an act of force or mob rule. True democracy must be implemented through elections. But as he saw the one-sided legal prosecutions of those who opposed the government, including students, he changed his mind.

Jay*, then joined the conversation. By coming to the protest, Jay hoped that the people of Thailand would be able to have a better government where the monarchy is regulated under democratic principles as seen by the 10 demands that the students made. Jay also wants to put a stop to enforced disappearances.

Nathakan Kamkaeo, a graduate from England, also spent the night at TU due to the fully booked hotels. She said she wants the monarchy to be regulated under a legal framework without political influence.

The night in the open was not comfortable. Phawat and his friends complained about the inadequate toilets and questionable red tape like having to wait for police permission to open the public toilet truck. But Phawat hoped these difficulties would be worthwhile.

We want our difficulties to end in our generation. Nobody will have difficulties like us again. If they are not in trouble, they won’t have to come and protest, will they? 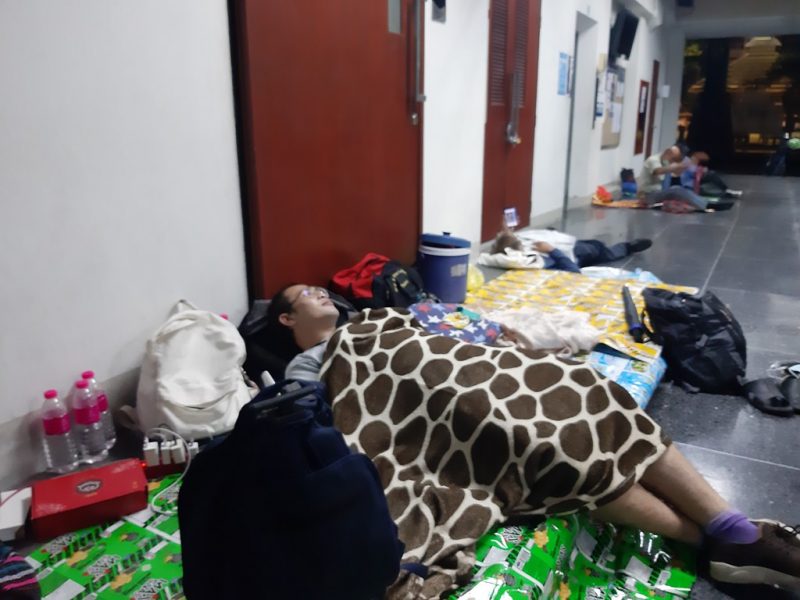 Phawat and his sleeping spot. Photo and caption by Prachatai. Used with permission.

An old protester and the same old struggle

During the interview with Phawat and his friends, Saritphon Yotphayung, 74, a former TU student, stopped by to share his political experiences from 1973 and 1976.

I studied at the TU Law faculty in 1965, I went to the march [in October 1973]. I did not want my grandchildren to live like that. I thought it must end in our generation.

The 1973 protest was successful but merely served as a prelude to the October 1976 massacre when people and students were brutally killed after they staged protests against Thanom’s return to Thailand as a monk. The movement at that time was misrepresented by conservative, royalist media and society as a communist, anti-monarchy movement.

In that year, Saritphon worked at the Ministry of Justice, formerly located near Sanam Luang, where he saw people being killed and hanged. He realized that the dictators had been chased out, welcomed back and then had people killing each other.

He also shares the same sentiment as the young people in changing Thai politics for the better.

Meeting the kids in this generation again, I don’t want them to be 74 and still having to come and sit like this again. I want it to end already.

Piyarat has been organizing the volunteers since the protest on August 18 at the Democracy Monument. They are responsible for public order at protests, traffic management and ensuring that protesters do not bring weapons to the protests by checking their belongings.

On the one hand, volunteers worked with police to oversee public safety and on the other, they were also on the lookout for police violence. At night, the volunteers were divided into three shifts, taking turns to monitor safety and the movements of riot police.

The volunteer guards were divided into 2 groups, independent from each other. Piyarat’s group oversaw the situation outside TU, while a group made up of TU students looked after the situation inside TU.

Prachatai was unable to contact the TU group leader, but TU volunteers said that their basic job was to keep the situation under control, screen vehicles that entered TU, patrol the perimeter and look after the well-being of protesters sleeping inside TU.