There is still hope for a virtual festival 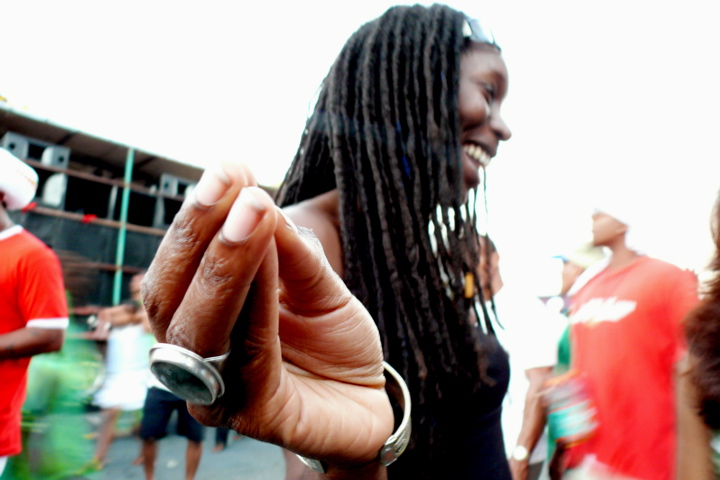 “Carnival Tuesday meggie”: Carnival lover Attillah Springer gives a “meggie” – a hand gesture that brings the thumb and four fingers together in a sign of derision, scorn or rejection. Photo by Georgia Popplewell, CC BY-NC-ND 2.0.

It may have been anticipated, but now it's official: thanks to the COVID-19 pandemic, Trinidad and Tobago's 2021 Carnival celebrations have been cancelled.

Prime Minister Keith Rowley made the announcement on the afternoon of September 28, calling the national festival “the perfect environment for the spreading of the virus.” Despite the inevitable economic blow the decision will have, he said, he's not prepared to take the risk.

Reaction, predictably, was split. While most people applauded the decision, calling it both “expected” and “solid”, others wondered about the fate of those whose income depends on the national festival. When one Facebook user called the decision “insane”, Josie Aché-De Goulard retorted:

NO! it's realistic and logical is what it is. Everyone else has already gone ahead and cancelled theirs. I do not possibly see how any “right thinking” citizen of T&T could possibly think to put the country under further threat from Covid-19.

Trinidad and Tobago Carnival 2020 was already over by the time the country recorded its first case of COVID-19 in March.

Other countries that host annual Carnivals, including Brazil, have already postponed their 2021 events, but it is only the third time in history that Trinidad and Tobago has put theirs on hold—a history that Trinidadian author Michael Anthony chronicled in his book “Parade of the Carnivals of Trinidad, 1839-1989″.

In the chapter etitled “Carnival in a World of War,” Anthony noted that the festival continued as usual during World War I, which was fought largely in Europe. After the war ended, the 1919 celebrations were known as “Victory Carnival”. During World War II, the festival did not take place at all between 1942 and 1945, although “spontaneous” celebrations happened on May 8 and 9, 1945 in honour of Victory in Europe (VE) Day, and on Aug 15 and 16, 1945 for Victory over Japan (VJ) Day.

The country's street festival was postponed from February 1972 to May 1973 because of the threat of the polio virus, so it is not as if the move to put off next year's Carnival celebrations is unprecedented. In fact, many netizens saw it coming, but hoped that a virtual celebration might take its place.

In a Facebook status update on June 24, Maria Rivas-Mc predicted that “promoters are going to have to Zoom in fete-goers to the music and the vibe from concert halls in ‘foreign’ [abroad]!” Virtual Carnivals are something that costume designers like Clary Salandy have already been experimenting with—the band she and her husband created for Notting Hill Carnival 2020 was showcased online.

Trinidad and Tobago's Carnival stakeholders have also expressed excitement about the opportunity to share their creativity in the virtual realm. Facebook user Marc Bejai suggested:

We keep forgetting that there are elements of carnival that are outside the realm of the street parade. We should adapt and showcase our calypso, pan, extempo and dimanche gras much like how sporting events are still being carried out.

Both calypso music and the steelpan instrument originated in Trinidad and Tobago. Extempo refers to an extemporaneous form of calypso, and Dimanche Gras, literally translated as “Big Sunday,” is a grand show at which coveted titles like the Calypso Monarch are decided.

Franka Philip of Trini Good Media, which produces the “Talk ‘Bout Us” podcast, crowdsourced opinions on what a virtual Carnival might look like. Most commenters felt that simply delaying the celebrations would be best, with Zahra Gordon suggesting that it may be an opportune time “to re-focus to community Carnivals and limit the size of large bands.”

Aside from the issue of a vaccine being made available globally, it’s difficult to envision any Carnival 2021 at all, due to the commercialization of the festival, and the limitations of two major sources of revenue: Government expenditure will be prioritized elsewhere, and corporate entities will slash sponsorship budgets.

Having a 2021 Carnival may jeopardize the planning cycle for one in 2022. It will be almost impossible to execute, as Carnival mas [costume] production is essentially a 12 month cycle. So there are challenges to logistics, Sponsorship, Supply Chain, Manufacturing, Costuming, International Travel, Consumer Patterns, Disposable Income and Statutory Approvals all changing for the next 18 months.

Carnival enthusiast Tillah Willah was not perturbed, however. She posted on Facebook:

You don’t always need a crowd to observe your ritual, to praise your ancestors, to offer thanks to the universe for your life.

“Horn” is Caribbean slang for infidelity.

Other netizens wondered whether, given the cancellation of the physical street parade, they would have to go to work on Carnival Monday and Tuesday. Apart from essential services, most workplaces are closed on those two days, even though they are not official public holidays.

It didn't take long for the memes to surface. This one poked fun at what the 2021 designs in a sought-after band—known for its skimpy costumes—might look like: 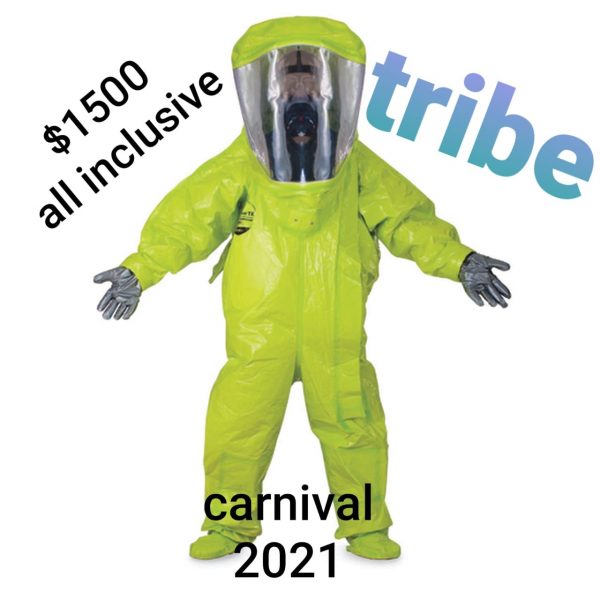 It is a question that both the producers and loyal participants of Trinidad and Tobago Carnival are still trying to figure out, but stakeholder Rubadiri Victor certainly hoped that a virtual Carnival 2021 is in the offing:

Trinidad and Tobago should see virtual Carnival 2021 as the launch of T&T's virtual economy! […] We are creating a telegenic event with brilliant filmmakers and Carnival, Creative, and Business stakeholders for international consumption with brand T&T as the winner!