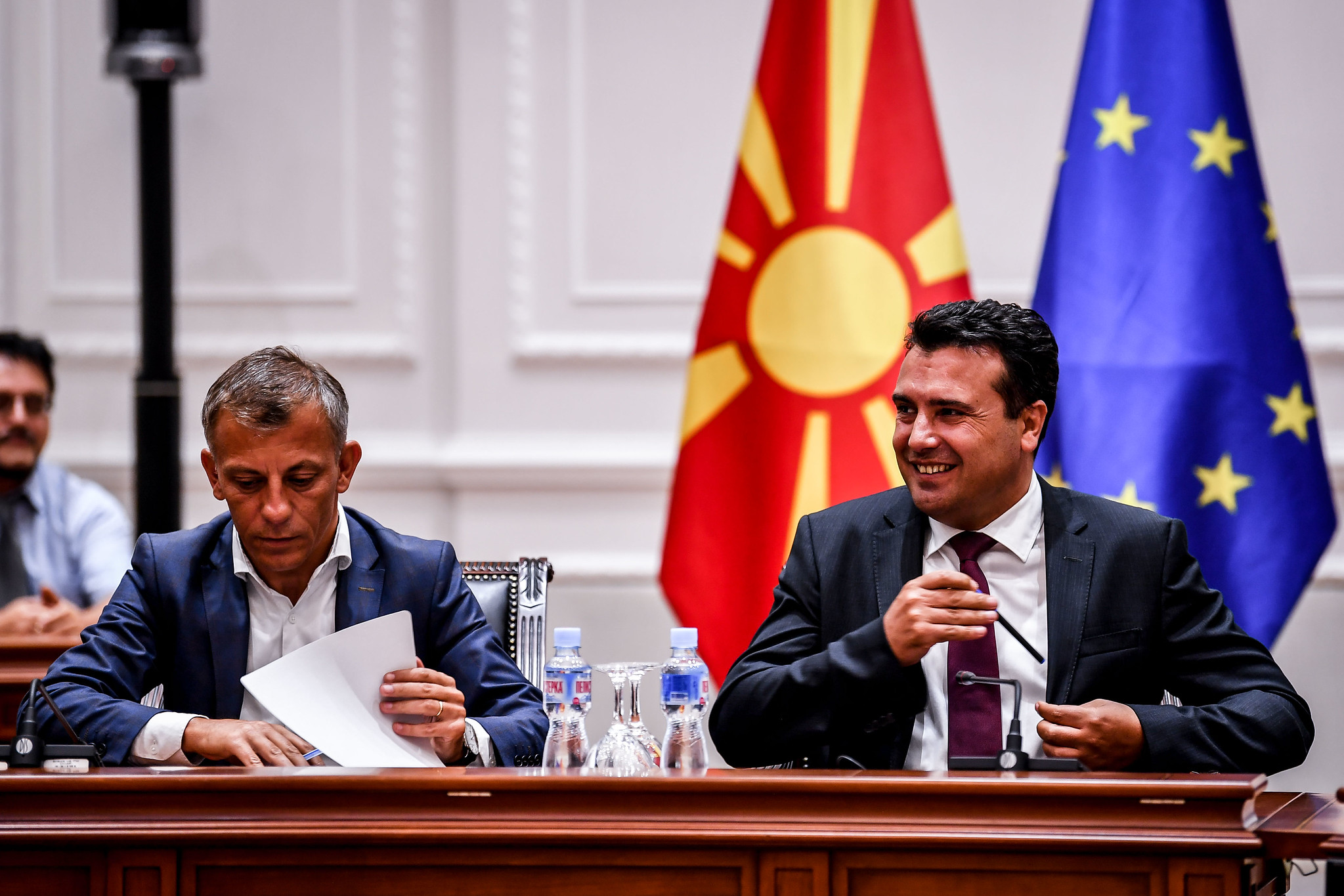 Prime Minister Zoran Zaev (right) and Minister Edmond Ademi at a meeting with representatives of the Macedonian diaspora, on August 14, 2019. Photo: Government of the Republic of North Macedonia, Public Domain.

North Macedonia’s “new-old” government, formed after the July parliamentary elections, recently announced the configuration of its ministerial portfolios. A new post—held by Ljupco Nikolovski—broadly covering corruption, sustainable development, and human resources, has garnered significant media attention. However, no one seems to have noticed the disappearance of the position of minister without portfolio responsible for the diaspora.

When Zoran Zaev’s Social Democratic Union came to power in 2017 following the Colorful Revolution there was much enthusiasm, both at home and abroad, about what the change in government would mean for Macedonia’s future. One of the areas of interest was relations with N. Macedonia’s large, multi-ethnic diaspora living abroad. These emigrants represent a potential source of foreign direct investment for the country, human capital to provide support to neglected sectors such as healthcare and education, and connections to Western governments on the path to NATO and EU membership.

However, relations between the diaspora and the homeland have for years been plagued by problems. In the early years of independence in the 1990s—many emigrants returned or directly invested in N. Macedonia, only to see their investments abused by corrupt officials. Over the past 20 years, other concerns such as inadequate staffing and poor services offered by its diplomatic and consular missions abroad, as well as the politicization of voting in the diaspora, have only exacerbated problems.

Many Macedonian citizens living abroad (both temporarily or permanently) have struggled to get documents such as passports and identity cards renewed or properly regulated via Macedonia’s diplomatic missions. Initial hopes of citizens abroad to have their own members of parliament—independent of political party affiliation—to represent their interests were also dashed when the process became politicized and political parties nominated their own candidates. Voting is further complicated by a declining interest in light of the complex process of having to pay to travel to the limited number of Macedonian diplomatic or consular missions, many Macedonian citizens living abroad being disengaged from what is going on in the country, and a broader feeling of betrayal on a variety of issues, from local corrupt politics to the sensitivities surrounding the name change. Furthermore, the cost of administering voting in the diaspora is high and raises many questions within Macedonia as to whether this is a priority. Today, even the initial three MPs afforded to the diaspora have been conditioned to a certain threshold of registered voters which, together with the difficulties of voting, is simply impossible to achieve. As such, in the last two parliamentary elections, the diaspora was unable to receive MPs in N. Macedonia’s Assembly.

In an effort to repair relations with this community, the government-appointed Edmond Ademi, a member of the Social Democrats, in 2017 to serve as minister without portfolio responsible for the diaspora. Aside from the Agency for Migration, the Ministry of Foreign Affairs and their diplomatic and consular missions abroad, and the short-lived MP spots for the diaspora, this new position was the most visible and high-level attempt to engage N. Macedonia’s diaspora since independence. The Macedonian government’s 2017-2020 program briefly mentioned that “[t]he Government, through the Ministry of Foreign Affairs, will attend to the well-being of the Macedonian national minority living in the neighboring countries” (this is no longer the case following the Prespa Agreement) and that “[w]e will improve ties with our diaspora.”

Minister Ademi, as well as other representatives of the government, quickly set out to establish contacts with various diaspora groups. One of the first major meetings was held in September 2017 on the sidelines of the United Nations General Assembly in New York City. A month later, in October 2017, the government ambitiously announced the need to create a National Strategy for Cooperation with the diaspora and formed a working body comprising Minister Ademi’s cabinet, civil servants from within government institutions, a few experts, and individuals and organizations from the diaspora. There was a lot of initial buy-in from diaspora groups, but due to unresponsiveness, unpreparedness, and unprofessionalism, among other reasons, the process for engaging the diaspora via the working group began to unravel.

In the months after October 2017, the United Macedonian Diaspora organization cut ties with the government over their positions on the name-change negotiations with Greece and the Law on the Use of Languages. The Forum for Democratic Macedonia, a newer diaspora organization that emerged out of the pro-democracy #IProtest (#протестирам) and Colorful Revolution protests abroad, initially continued to work with the government on the National Strategy. However, they, too, eventually backed out of the working group because of unprofessionalism and unwillingness on the part of Edmond Ademi's cabinet to listen to input and recommendations from diaspora groups. Ultimately, in March 2019, the National Strategy for Cooperation with the Diaspora was formally passed by the government with little buy-in from many key stakeholders—most importantly individuals and organizations from the diaspora.

Today, the Forum for Democratic #Macedonia sent this letter to the coordinator of the working group tasked with preparing the National Strategy for Cooperation with the Diaspora in the office of the Minister responsible for the Diaspora – Edmond Ademi.

Similarly, during this time, the work of the Ministry of Foreign Affairs continued with little to no changes in the ability to provide services for Macedonian citizens abroad. The Agency for Migration over the last three years traveled around Europe and engaged with diaspora groups on the cultural and education fronts: providing Macedonian language classes and highlighting the success of young professionals in the diaspora, but with little impact. While Minister Ademi continued the government’s funding of projects with diaspora groups via the Ministry of Foreign Affairs, and attempted to expand outreach to diaspora organizations from minority groups, such as ethnic Albanians from N. Macedonia, it is overall unclear what success his cabinet had in re-engaging the diaspora. Among the major impediments, the division of responsibilities with regard to diaspora issues between the cabinet of the Minister, the Agency for Migration, and the Ministry of Foreign Affairs and their diplomatic missions abroad was never defined and only further complicated things.

Now, following the 2020 elections and the return of the Social Democrat-led coalition to government, the post of minister without portfolio responsible for the diaspora has been scrapped. The government’s new 2020-2024 program is again brief in referring to the diaspora, only praising the creation of a National Strategy for Cooperation with the Diaspora, noting the government will continue to fund projects with diaspora organizations, and lauding 10 percent additional financial support (compared to domestic or foreign investments) for investors from the diaspora. It begs the question—what will happen to the National Strategy for Cooperation with the Diaspora and who will follow up on the work—however minor—done by Minister Ademi? According to the National Strategy’s Action Plan, by the third quarter of 2020 there should have been (1) an analysis of the need for a legal solution to regulating cooperation between the state and the diaspora, (2) the establishment of a parliamentary group for cooperation with the diaspora, (3) the conceptualization of a Law on the Diaspora in cooperation with all stakeholders including diaspora organizations and civil society organizations, and (4) determining the need to establish a special institution: a Ministry of the Diaspora. None of these items, among many others included in the action plan, have been realized, nor has an update on their progress been given to diaspora organizations or the broader public.

It is rather ironic that the National Strategy and its action plan broadly foresaw the creation of a Ministry of the Diaspora (rather than simply investigating the feasibility of fostering such an institution) and tied subsequent steps to the success of this action item. Now, not only is there no Ministry of the Diaspora, but there is not even a minister without portfolio responsible for the diaspora to oversee and implement the National Strategy.

Many questions remain for the “new-old” government of North Macedonia and their relations with the diaspora. Will the government continue pursuing the National Strategy, regardless of the lack of buy-in from diaspora organizations and concerns about the strategy’s feasibility? Who in the government will head this effort? Will the Agency for Migration now take over the coordination and implementation of the strategy? Will Macedonians living abroad get professional diplomatic and consular services? As recent discussions about changing N. Macedonia’s electoral model progress—potentially having just one electoral district with open candidate lists—there is uncertainty as to what that means for diaspora voting going forward.

Once again, uncertainty has become the status quo in the relationship between the Macedonian government and the diaspora.

The views and opinions in this article are personal and do not reflect the author’s employer or other affiliations in any way.