Reporter Mochizuki Isoko is a champion of press freedom 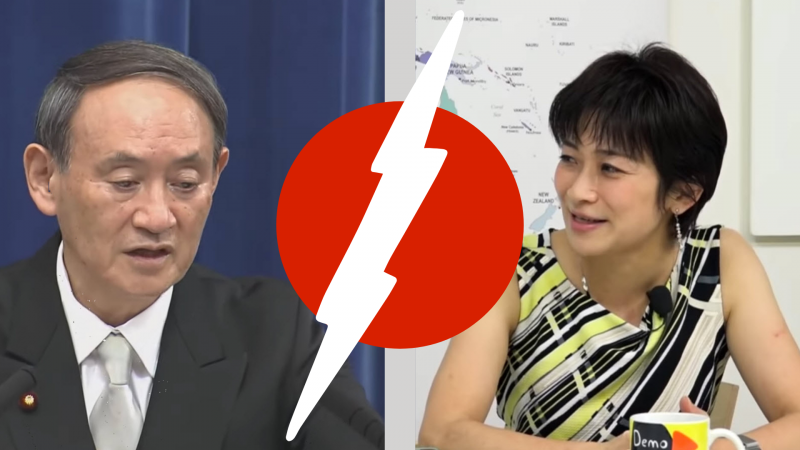 In late August, after eight years in office, and one day after becoming Japan's longest-serving prime minister since World War II, Abe Shinzo announced his resignation. By September 16, Suga Yoshihide was chosen to lead the governing Liberal Democratic Party (LDP) and become Abe's successor as the new prime minister of Japan.

Suga, long-regarded as Abe's “right-hand man” in government, has promised to continue with Abe's policies, including economic revitalization. However, there are fears that Suga will continue his pattern of shutting down and even bullying journalists who ask questions that hit too close to home.

In the days leading up Suga's to ascension as head of the LDP and prime minister of Japan, one longtime media adversary wondered what his leadership might mean for journalism in Japan. Writing in the business weekly Toyo Keizai several days before Suga became prime minister, veteran journalist Mochizuki Isoko asked:

My newest for #ToyoKeizai: How will the media fare under a Suga administration?

So far, when the media asks a question, Suga has given zero answers. Using the COVID-19 pandemic as an excuse, media availability (press conferences) has been reduced to ten minutes from start to finish, with Suga stating “it's enough time.” Many reporters have been left disappointed by this.

Suga has a long history with Mochizuki Isoko, who reports on national politics for Tokyo Shimbun. Since at least 2017, Mochizuki has earned a reputation in Japan as an especially aggressive journalist, frequently pressuring Suga, in his former role of chief cabinet officer, to answer questions.

In 2017, as former Prime Minister Abe Shinzo struggled to contain two political cronyism scandals, Mochizuki doggedly posed a series of 23 questions during daily pressers that remained unanswered by Suga and other government spokespeople.

In a 2019 press conference, Mochizuki demanded the disclosure of the specific budget breakdown and details of a controversial and exclusive event organized by Abe Shinzo. However, Suga interrupted Mochizuki, asking her to “simplify and shorten” her questions, and then cut the journalist off.

The most infamous exchange between Mochizuki and Suga occurred in December 2018, during intense scrutiny of a construction project at a new US military base in Okinawa prefecture. Mochizuki regularly grilled administration officials about the environmental impact of the new base, revealing potentially illegal political interference.

In response, Suga, acting as a government spokesperson, refused to answer Mochizuki's questions, calling her statements about the base project inaccurate.

Suga's staff then sent memos to major journalism outlets in Japan obliquely calling Mochizuki a liar, stating that she had asked “inappropriate questions” that would “spread misinformation” to both members of the press pool covering the base issue — and to the general public.

Since then, government officials refuse to recognize her or answer her questions, effectively freezing out Mochizuki from government press conferences.

A battle to hold the government accountable

Mochizuki's determination as a journalist, and the efforts by the government to silence her, have not gone unnoticed. The November 2019 docudrama i ―新聞記者ドキュメント, (“A First-Hand Account of Being a Journalist in Japan”), based on Mochizuki's experiences as a female reporter, started a national conversation about press freedom in Japan.

In May, “The Journalist,” another film about Mochizuki Isoko swept the 43rd Japan Academy Film Prize awards, receiving six prizes, including Picture of the Year.

Besides inspiring popular films, Mochizuki's battles with Suga and the previous Abe administration that he served have ignited a public conversation about press freedom in Japan, which former United Nations special rapporteur on the promotion and protection of the right to freedom of opinion and expression David Kaye has reported is under threat:

[…] A significant number of journalists I met feel intense pressure from the government, abetted by management, to conform their reporting to official policy preferences.

While Mochizuki is sometimes criticized by commentators for “jamming” press conferences with her questions, the Tokyo Shimbun reporter has also gained widespread support. Opposition politician Okuno Soichiro has spoken out in Mochizuki's defense, stating:

[The Japanese government is] violating freedom of press, freedom of speech, and the people’s right to know.

Regarding how (Suga, as chief cabinet secretary) runs press conference, it's a real problem when Suga says (to reporters ‘Keep your questions brief’ during Q&A, interrupting the flow of questions every few seconds. Even though the media has repeatedly requested (Suga stop doing this), things never change. It's a serious challenge to ‘freedom to report’ that guarantees the people of Japan the ‘right to know.’ #TowardsaCountryThatCanAskQuestions

In early September, during Suga's race to become Abe Shinzo's successor as prime minister of Japan, Mochizuki questioned him directly about his attitude toward the press. Suga, as the facilitator, cut off Mochizuki's questions rather brusquely, saying:

The press conferences have a limited amount of time, and follow certain rules. Therefore, I would appreciate if you can keep your questions concise.

Suga did not provide an answer to Mochizuki's questions about how he, as prime minister, will work with the press in Japan.