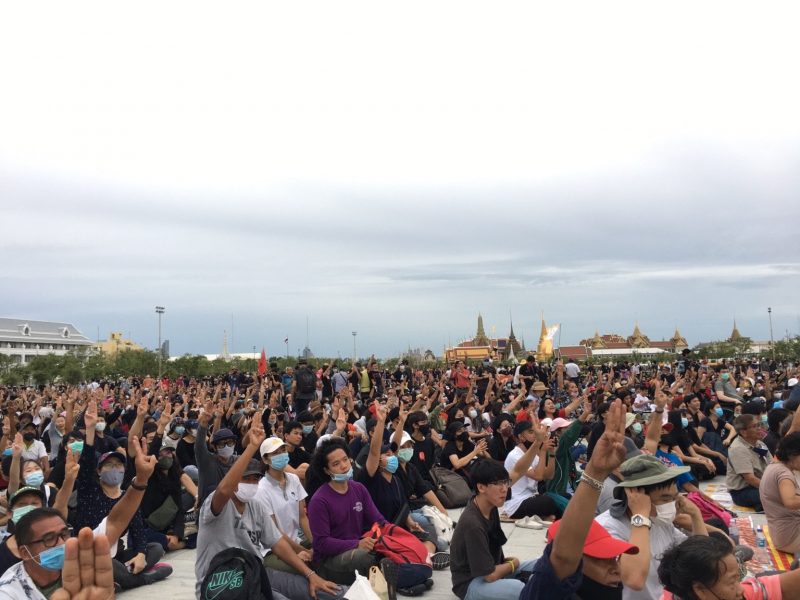 A massive protest in Bangkok, Thailand held on September 19, 2020. Photo by @Darikulica / EngageMedia, a content partner of Global Voices

September 19 drew a massive crowd in Bangkok during a protest that called for the dissolution of the Thailand parliament and the drafting of a new constitution. On September 20, protesters installed a ‘people’s plaque’ but was removed the following day. The protesters claimed a symbolic victory after they succeeded in submitting a petition to the king’s Privy Council about their demands to reform the monarchy.

Thailand enforces one of the strictest Lese Majeste (anti-Royal Insult) laws in the world. During the pandemic, the government has been accused of using the Lese Majeste law to detain critics and harass the opposition.

The Saturday rally was the biggest anti-government protest since the military grabbed power in 2014. Estimates vary but some participants said that the assembly reached more than 100,000. The protest proceeded despite reports of police intimidation and threats of arrests. Prime Minister Prayut Chan-o-cha, the former army general who led the 2014 coup, also made a televised address discouraging people to go out since the rally could cause a spike in COVID-19 cases.

The protest activity started at Thammasat University while the main program was held at the Sanam Luang city park field.

Speakers took turns highlighting the three demands of the protest movement: dissolve the parliament, rewrite the military-based constitution, and end the intimidation and arbitrary arrests of critics of the government.

READ: Why are young people protesting in Thailand?

The youth-led protest was supported by various sectors. A veteran activist couple shared their thoughts about the protest during an interview by Coconuts news website:

Today I came to support the children’s generation. I disagree with this dictatorship government and always have. The constitution must come from the people, and there need to be checks on government officials and transparency. Inequality happens under this current system.

Many protesters camped-out in the evening in preparation for the September 20 activity.

Almost 2 am. I’m still at Sanam Luang with thousands of protesters who intend to camp out here overnight.

Tomorrow, they will place a brass plaque – a nod to the 1932 revolution that ended absolute monarchy – that declares “the country belongs to the people, not the monarchy.” pic.twitter.com/GDI8teVLlG

Many protesters stayed overnight in Bangkok. Leaders have said that today they will declare “the country belongs to the people, not the monarchy’ in front of the Grand Palace. #19กันยาทวงอํานาจคืนราษฏร #WhatsHappeningInThailand pic.twitter.com/5psHUzMLbZ

‘This country belongs to the people, not the king’

On September 20, protesters installed a ‘people’s plaque’ on the ground of Sanam Luang which has the following inscription:

The 2.0 People's plaque at a glance. The inscription states:

(Edge) People shall know, that this country belongs to the people, not the king as they lied.

The plaque also features the ‘Hunger Games’ three-finger salute which has become the symbol of the democracy movement in Thailand.

The plaque is similar to what the People’s Party installed in 1932, the year when Thailand’s absolute monarchy ended and gave way to the establishment of a democracy. The 1932 plaque has this inscription:

But in April 2017, the plaque was removed and replaced by a new one honoring the monarchy with this inscription:

No one was arrested for removing the 1932 plaque but many suspected that it was done by pro-royalist forces.

On September 21, journalists reported that the ‘people’s plaque’ 2.0 had been removed.

The new plaque has is now gone I less than 24 hours. This is probably a clear answer from the powers that be about what they think of the demands to reform the monarchy. Just took this photo. Unceremoniously removed. #WhatHappensinThailand #Thailand pic.twitter.com/wf5sH3b0Aj

The police said they are readying a case against the protesters for installing the plaque in a government site without coordinating with authorities.

Youth leaders led a delegation in presenting their letter to the Privy Council. They were initially blocked by the police but their letter was eventually received by authorities.

Thai student activist Panusaya “Rung” Sithijirawattanakul talks to police to hand over a list of demands for King Maha Vajiralonkorn after a march was blocked in Bangkok. By @Athit_P #19กันยาทวงอํานาจคืนราษฏร #WhatsHappeningInThailand pic.twitter.com/81HaiF6rmc

Protesters clarified that they are not clamoring for the abolition of the monarchy, which is a beloved institution in Thailand. What they are seeking is to make it relevant in the 21st century and compatible with the requirements of a constitutional democracy.

Protest leaders said the next action will be on September 24 to pressure the constitutional drafting committee of the parliament. They are also calling for a general strike on October 14.

This video provides an overview of the weekend protest: