In Turkey, women rise up to stop withdrawal from the Istanbul Convention 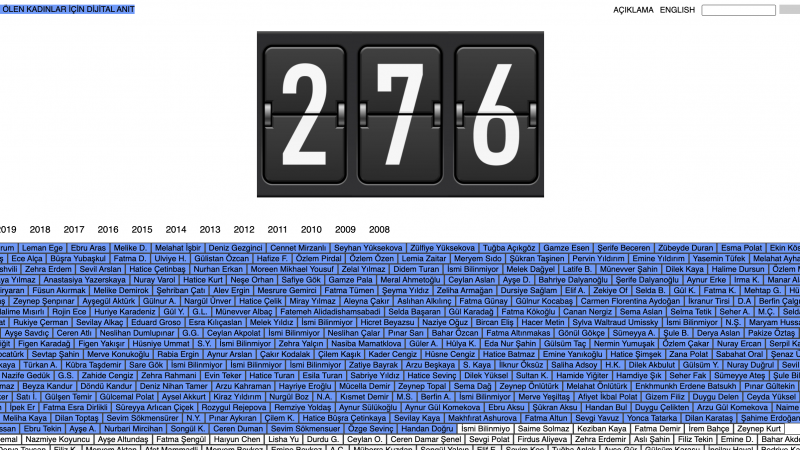 A website called Anit Sayac (Turkish for “monument tracker”) indicates the number “276” on its home page at the time of writing this story. It represents the number of women who were murdered in domestic violence attacks in Turkey—just in 2020. The counter is updated every day. But it is the names of the victims, written just below it, that strike the site's visitors.

Among them is 27-year-old Pinar Gultekin, whose murder by her partner in July sparked public outrage and protests. On the same day that Pinar's body was found by the police, the ruling Justice and Development Party (AKP) announced it would withdraw from the Istanbul Convention, a treaty signed by member states of the Council of Europe to prevent violence and domestic abuse against women. In 2012, Turkey became the first country to ratify the treaty—with support from the now-ruling AKP. The treaty came into force in Turkey in 2014.

Nowadays, the party led by President Recep Tayyip Erdoğan perceives the Convention to be antithetical to “Turkish family values.” Numan Kurtulmus, deputy chair of the AKP, said on a July 2 TV interview that it was “wrong” for Turkey to have ratified the convention. “There are two issues in this convention which we do not approve of,” he said. “First is the gender issue, and the other is the sexual orientation issue. There are also other issues but these two have been the concepts which have played into the hands of and create spaces for the LGBT and marginal elements to work within.”

The party's position resonates with Turkey's conservatives. Abdurrahman Dilipak, a popular Islamist columnist, described the convention in 2019 as “a devil with an angel’s face” and “a trap” set to destroy the traditional family.

Meanwhile, local women's rights organisations who help with survivors domestic violence fear that Turkey's withdrawal from the convention will be devastating to their work—as well as to the families seeking justice for loved ones who were victims of femicide.

Mor Cati, a leading Turkish NGO working to prevent and document domestic violence, argues that any government attempt of withdrawal from the treaty could face a legal challenge. “According to the Turkish constitution, international agreements on human rights are above internal laws,” said Mor Cati lawyer Meline Cilingir, on an interview with Middle East Eye. “If the parliament tries to overturn the convention, women's rights organizations will try and take it to the constitutional court to request its cancellation,” she added.

Not everyone within the ruling party is in favour of withdrawal. The Women and Democracy Platform (Kadem), an organization co-founded by Erdogan's daughter Sumeyye Erdogan Bayraktar in 2013, has publicly defended Turkey's membership in the treaty. On a July 10 statement, Kadem said that “in a relationship where there is no love and respect and one party is tormented with violence, we cannot talk about ‘family’ anymore.”

Pinar Gultekin's murder helped spark a movement in support for the convention, expressed online by the hashtag #istanbulconventionsaveslives.

“Her death was emblematic of longstanding forms of structural violence made possible by acts of omission and commission by the state and its policing functions,” said Asli Bali, faculty director of the UCLA School of Law's Promise Institute for Human Rights.

The overwhelming public outcry seems to have made an impression on the AKP—a decision that was meant to be announced in early August has been postponed.

”We are the best opposition, that’s why the government wants to control us,” says feminist lawyer Canan Arın. As a part of our series on #DefendingHumanRights in #Turkey, we share her story ? https://t.co/KN5vDbHJ7F#istanbulSözleşmesiYaşatır#IstanbulConventionSavesLives

Why does the #IstanbulConvention matter?

Short answer: Because the #IstanbulConventionSavesLives

If you've got three minutes for a longer answer, watch @kadinih‘s latest videohttps://t.co/7rqWtkC2q0

Hashtag #istanbulconventionsaveslives & black/white selfies are being posted in protest over threats by Turkey's govt to withdraw from European treaty to protect women, & in solidarity w/ murder victims often reported in Turkish newspapers.https://t.co/uqBN31S9ef @sophiedaviesed

No state has ever withdrawn from the Istanbul Convention but, like Turkey, others are considering to do so. Among them is Poland, where conservative politicians have described the Convention as “endangering” to the traditional family. In May 2020, the Hungarian legislature refused to ratify the Convention, objecting to its definition of gender as “socially constructed.” Like Hungary, Bulgaria and Slovakia are signatories to the Convention but haven't ratified it.

In 2018, 440 pairs of high heels were placed on the façade of a building in Istanbul. The installation by Turkish artist Vahit Tuna was a memorial to 440 women murdered by their partners or family members in that year alone. As Turkey weighs its membership to the Convention, women ask: How many more pairs of shoes need to be displayed to convince the government that those human lives are at stake?