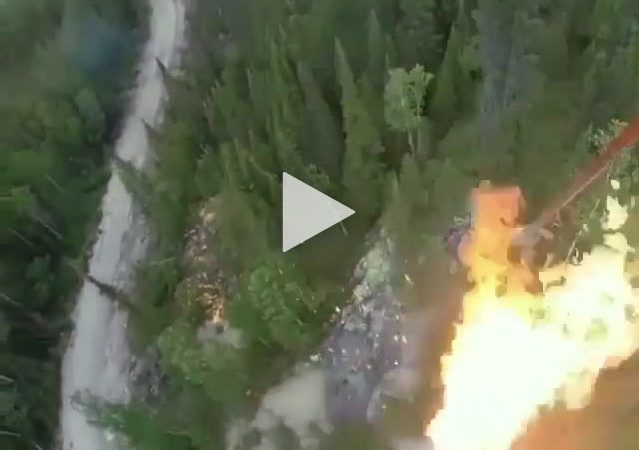 Screen capture from video via Tire and Fire.

False rumors alleging that the fires ravaging the United States’ West Coast were caused by the Chinese Communist Party (CCP) are spreading on Chinese social media, including on Twitter, Weibo, and WeChat.

A video showing flames being shot out of a helicopter is being presented as hard evidence to support the false claim, which has spread on Twitter and other social media platforms amongst Chinese political dissents. This post of the video received over 4,000 retweets:

CCP spy drone got caught. On the 9th (of September), officials from the FBI revealed that the U.S National Security Bureau’s investigation showed that the wildfire spread along the west coast had sparked along the forest highways. The house of 57-year-old Chinese American Li Jianjun who had migrated to the U.S for 20 years was searched. A video was found on his computer. The GPS record on his car shows that he travelled to the fire district many times in early August. The CCP’s unrestricted warfare has extremely high ROI (Return on Investment) — by investing $10K, it can cost $10 billion damage. Assassinations and destructions are usually packaged as personal conflicts.

The video was originally posted by an automotive news site called Tire Meets Road as part of an article on the “heli-torch,” an ignition device hung from a helicopter that disperses ignited lumps of gelled gasoline. The heli-torch is often used to conduct “backburning,” a common wildfire suppression tactic.

The information about the Chinese-American citizen being investigated for forest arson was also labeled as ungrounded by the same fact-checking agencies.

In China, the same video, along with the same baseless claim about the forest fire having set by drone, is also circulating on Weibo and Wechat, but without reference to the CCP.

In the U.S., there have been rumors about the wildfires being caused by leftist activists. While various fact-checking organizations, as well as the FBI, have clarified that they are entirely false, such claims continue to circulate on social media — and they have traveled all the way to China.

In the second week of September 2020, Oregon police arrested several armed extremists who were setting fire to the forest (…). Do you still believe the big media’s endless brainwashing reports about the causes of wildfire in the West Coast being climate change?

Also on the same WeChat post, a screenshot of Google Maps showing what was allegedly fire sites along the West Coast was presented as another piece of evidence of arson. The caption of the screenshot says.

This is a map indicating the wildfire in the U.S West Coast. The two neighbouring countries are intact. Outside the U.S border, there is no fire.

The English version of such claim, which uses the same map, has circulated widely on both Facebook and Twitter. Fact-check organization Snopes has identified it as false.

This particular disinformation trend seems to be underpinned by a wider narrative of “unrestricted warfare” between China and the U.S., as at least a few of the Chinese internet users who posted about them used that term (including @zengjieming, @Liudeming, @iamapoldfriend, @niuniu_Liu2 on Twitter).

“Unrestricted Warfare” is the title of a Chinese book on military strategy written in 1999 by two colonels from the Chinese Liberation Army.

The book argues that China is able to defeat the United States through non-military strategies, such as via economics and the internet. It has become a popular read in China, and its ideas have been embraced by Chinese nationalists and hawks.

Since the US-China trade war escalated, the Chinese political commentariat has been increasingly incorporating the term “unrestricted warfare” in its discourse about the relations between the two countries.

On Weibo, posts referencing war with the US are quite common. The latest iteration of that conversation on the platform involves a bilingual post written by Zhao Shengye, the founder of China Red Hacker Alliance (紅客聯盟) – a patriotic hacker network, in which he describes what a nuclear war between the two countries would look like. Twitter user @xiaoli_ya posted a screenshot of Zhao’s post:

Ironically, Zhao's ideas have also been popular with hawks in the US, among them former Trump chief strategist Steve Bannon, who's cited the book as an “inspiration.”

When COVID-19 arrived in the US, the idea of “unrestricted warfare” made the rounds on US Twitter, perhaps most frequently demonstrated by Trump’s insistence on the use of the term “Chinese virus.”

Two months ago, the mysterious “seeds” that were anonymously sent from China to people in at least 50 countries were also interpreted by some commentators as a form of “unrestricted warfare.” The disinformation about the West Coast fires seems to be following the same path.