Will a new US TV series on the ‘Macedonian teens who helped elect Trump’ perpetuate a tired cliché?

The book “How we elected an American president” was sold at Skopje Book Fair in September 2020. Photo by Filip Stojanovski, CC BY.

The so-called “Macedonian teenagers” who set up networks of fake news sites in the lead-up to the 2016 United States election continue to turn a profit — not so much for themselves anymore, but for producers looking to capitalize on the exaggerated trope.

To recap: In 2016, a group of Macedonians from the city of Veles set up various sensationalist websites that peddled disinformation catering to the tastes of Donald Trump voters, including baseless conspiracy theories. The links were marketed via social media, and their basic goal was economic: To get as many clicks as possible in order to generate ad revenue.

While such networks exist around the world, the high concentration of owners of those sites in a small Macedonian city, which was first identified by Buzzfeed, attracted a lot of media attention, resulting in coverage by Channel 4, CNN, Wired, NBC, and others.

Cut to four years later, streaming platform Quibi is said to be preparing a TV series, working title “Clickbait,” that tells “the true story of a group of Macedonian teenagers who made a fortune creating fake news in the run-up to the 2016 election,” according to United States magazine Variety.

The series will star British actor Fionn Whitehead, who played the lead role in the historical feature-length “Dunkirk.” He will play a “Macedonian teenage ringleader” named Niko, described as “a young man desperate to escape his circumstances, who discovers that publishing fake news could be his golden ticket,” says Variety. 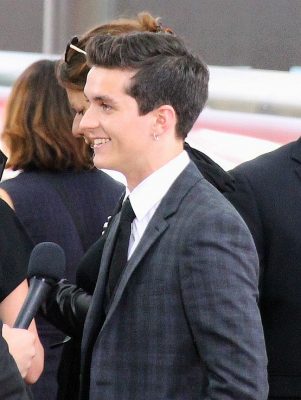 The series executive producers include US filmmaker Matt Reeves (famous for “Cloverfield” and sequels to “Planet of the Apes”) and Ann Ruark (“Boy Erased”).

But the idea that those fake news sites were run by kids was grossly exaggerated by Western mainstream media. In 2018, Investigative Reporting Lab Macedonia revealed that those networks were not just gigs by teenage “hackers,” but that many of them were run by adults, including a Macedonian lawyer with ties to American conservatives.

Macedonian outlet SakamDaKazam.mk followed up on the Variety story by interviewing sources from Veles, who confirmed that a team of producers visited the town in the summer of 2019.

One of the people they interviewed, who did not wish to be identified, was a man who had run such a website in 2016 but was not approached by the series’ producers. He voiced reservations to SakamDaKazam.mk that the series would provide an objective view of the events. In his opinion, the series will most likely reproduce the clichés of “boys who don't speak English, but write news, teenagers wearing worn-out sneakers forming the public opinion.”

According to the SakamDaKazam.mk article, the filming of the series was taking place during the summer in Bucharest, Romania, due to similarities of the architecture.

Prior to the series, a lesser-known commercial venture related to the Veles affair was a 2019 fiction book by Aleksandar Kukulev, a writer from Veles itself.

“How we elected an American president” (Како избравме американски претседател) is a spy thriller set in Veles and its surroundings. It combines historical references about the Bogomils, who indeed lived in the Veles area in the Middle Ages, with Nazis hiding stolen art treasures in nearby tunnels during World War II. The main plot features Russian, Israeli, and Balkan spy characters fighting over the fake news industry influencing U.S. politics.

In an April 2020 interview with local website Veles365, Kukulev said he never met any of the “Veles teenagers” personally, and that they are just supporting characters in his novel. He added that the teenagers “poked the entire world in the eye… Those lads don't need to be justified, but need to be respected.” In the same interview, Kukulev also claimed he didn't receive an award for the novel of the year for 2019 ‘due to political reasons.’

Global Voices’ content partner Meta.mk News Agency was among the first outlets that talked to the people from Veles involved in the fake news networks in 2016. Meta.mk editor Goran Rizaov (who also contributes to Global Voices) had this to say about the phenomenon:

When we first interviewed the owners of these disinformation websites in April 2016, President Trump wasn't yet an official presidential nominee. Almost all of them were eager to talk to us on the record. Some claimed they do it for financial gain, some said they liked Trump and others denied even having such websites. It's interesting to note that very shortly after publishing the first article they anonymously re-registered their websites and their names and phone numbers disappeared from official whois records.

Our thorough investigation that followed afterwards showed more about what the actual Veles “fake news factory” is not, instead of what it is. It was very clear that most of them are not teenagers, they don't have sufficient knowledge of the English language to write news articles and Veles wasn't the only town in Macedonia that had a “fake news hub.”

By the time Trump won the elections, this was widely spread and some people made a fortune out of it.

After the election results surprised everyone, we had dozens of calls and emails from foreign journalists that wanted to talk to them, but it was almost impossible. The community was closed for public. Those that actually talked to the foreign press were actually real teenagers that had none or little involvement in the websites that pushed the most popular content.