Memes highlighted the grotesque or potentially horrific connotations of the logo 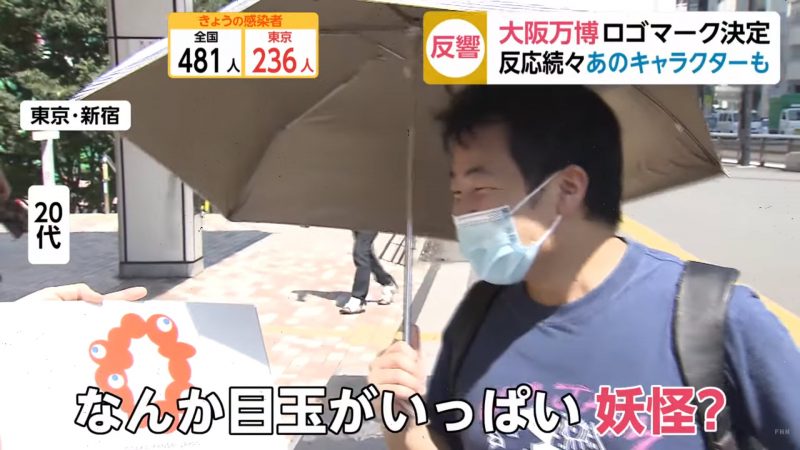 An Osaka resident reacts to the new logo for Expo 2025: “Is it supposed to be a monster made out of eyes?” Screenshot from FNN News official YouTube channel.

In late August, when the logo for the 2025 World Exposition — which will be held in Osaka, in western Japan — was unveiled, Japanese social media erupted in mock horror at first, but soon came to adopt the quirky and unusual design.

The winning design, choice “E” (see tweet below), selected from a list of five logo submissions, provoked a variety of confused reactions when it was revealed:

Yall, why did they choose E when they had so many beautiful choices? We are so confuuused.

Which one would you have chosen? pic.twitter.com/ZtVrnJxeMh

Held roughly every four years in different locations around the world since 1851, this international exhibition lasts for six months, typically attracting millions of visitors, and is intended to showcase the achievements of participating countries.

Resembling a red donut with blue eyes, the official name of the World Expo 2025 logo is 命の輝き (inochi no kagayaki, meaning “brilliance of life”). However, Japanese Twitter nicknamed the logo koroshite-kun, which roughly translates as “Mr. Please Kill Me Now”.

Nick Kapur, an expert in the history of Japan and East Asia, whose tweets about the odd, the unusual, or the simply interesting regularly go viral, collected a wide range of reaction memes, which he arranged into a long and detailed Twitter thread:

Kapur noted that many memes highlighted the more grotesque or potentially horrific connotations of the logo, such as this parody of Parasyte, a science fiction horror manga series:

EXPO 2025 Osaka reveals the logo.
……it's Shimada in Parasyte ? pic.twitter.com/BkIbO68XgE

Not everyone was terrified by the logo, however; one person used the design to knit a collar for their cat:

I knitted the Osaka Expo logo.

The Osaka Expo's logo also inspired creativity in the kitchen:

A little bit of flour, butter, sugar and eggs brings the logo to life! The “brilliance of life” (inochi no kagayaki) is ready to eat!

Another social media user created an augmented reality (AR) character for iPhone that was based on the logo:

I created an AR character that can summon (the logo). iPhone users can download at the link. #koroshite-kun #InochiNoKagayaki #OsakaExpo2025

Someone else created an 8-bit video game:

The similarities between the logo and real-world lookalikes did not go unnoticed:

Many people pointed out how the logo looks similar to the Amazon Rainforest fruit guarana.

Others tried to imagine how the logo might feel after being disparaged on social media:

Some chose to look on the bright side of the new logo:

As weird as the 2025 Kansai Expo logo is, at least it isn’t as mind-numbingly boring as the 2005 Aichi Expo one was. pic.twitter.com/0BfPCX5Ve7

This article also relied in part on research by Twitter users HirokoTabuchi, @MishimaKitan and @AmelieinTokyo.