#WarmallanAmaraqMamaqa is Quechua for "Girls, not mothers" 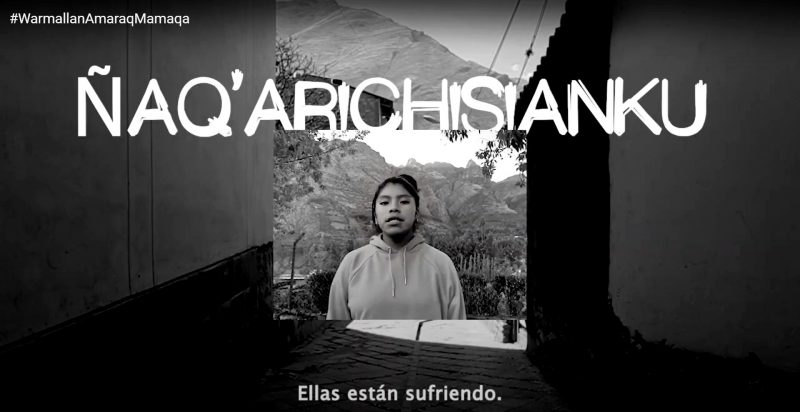 “The girls are suffering”. Screenshot of video “Warmallan amaraq mamaqa” (Girls, not mothers). Video by Kusi Kawsay uploaded in YouTube.

On September 6, high school students from the Cusco region of Peru marked International Indigenous Women's Day by creating a rap video demanding girl's rights, including access to emergency kits and therapeutic abortions in cases of rape.

In the video, shared with the hashtag #WarmallanAmaraqMamaqa (Quechua for “#Girls, not mothers”), students from the Kusi Kawsay educational institution rap about the 700 reports of rape committed against girls during COVID-19 related lockdown. According to data from the Ministry for Women and Vulnerable Populations’ Aurora National Program, 6072 violence-related cases against children up to 17-years-old were reported during Peru's COVID-19 social isolation period from March 16 and August 31. 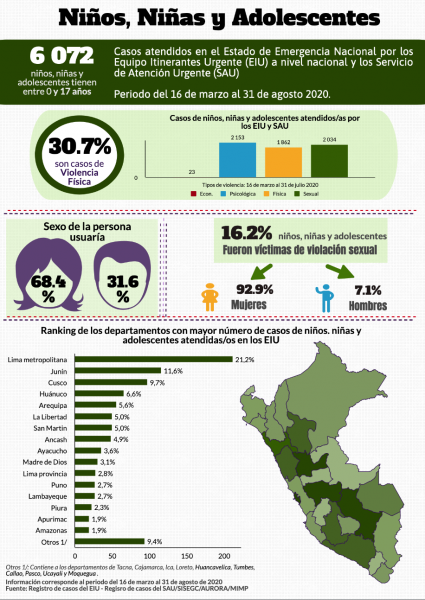 Image by Ministry and Women and Vulnerable Populations, under public domain.

The full video, shared on September 6, can be viewed on the Kusi Kawsay school Twitter account and on YouTube. The students rap in Spanish and in Quechua.

Video campaign #WarmallanAmaraqMamaqa by young girls from Kusi Kawsay. We demand the rights of peasant and indigneous girls to be respected. ??

The lyrics, which include “I reveal the fear”, “underestimating women [is] part of colonization” and “never silent,” were written by Elizangela, a 13-year-old teenager:

The Kusi Kawsay school is located in the Písac District, at almost 3000 meters above sea level, and is focused on the education of indigenous children from nearby communities. The school's philosophy blends elements of Waldorf education with the Andean tradition, striving to holistically enhance students’ artistic, intellectual, and practical skills:

Kusi Kawsay education philosophy is based in the Andean tradition, and has integrated some elements from Waldorf pedagogy. Right now, it serves abour 95 girls and boys from the Incas Sacred Valley in Pisac, Cusco. It currently has three levels: preschool, elementary and high school.