Together, these six nations represent 44 per cent of the world’s population 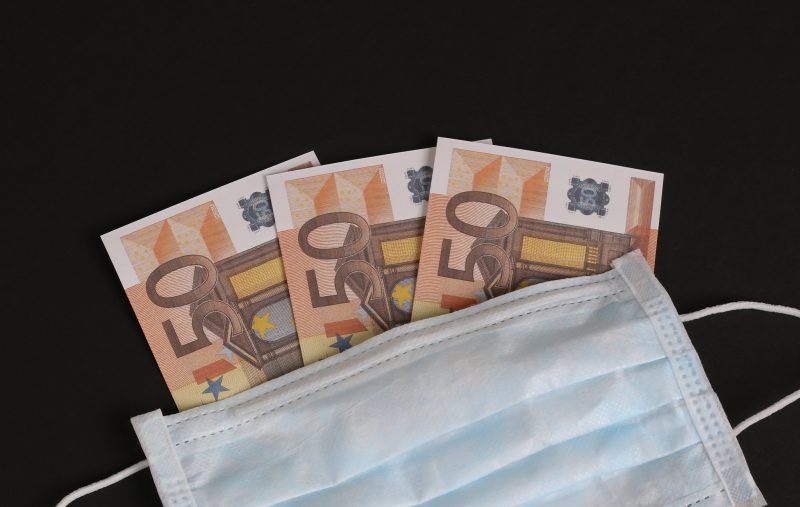 Coronavirus image concept of medical face mask and money, representing the pandemic and economic damages by Jernej Furman on Flickr, CC BY 2.0.

On September 6, 2020, officially recorded cases of COVID-19 surpassed 27 million, with a mortality of over 884,000 people. Although we are still in the midst of this global pandemic, thoughts are increasingly turning to its ultimate economic impacts. Here we show that the economic impress of the virus in any nation will be closely related to the extent of virus cases and mortality and the condition of the economy prior to the endemic, as well as to virus management policies.

The political economy of any one nation, however, is interlinked with the global economy, and because of this the scale of activities in the largest economies really does matter—they may even be of greater importance to a nation’s ease of recovery than the effectiveness of its COVID-19 management regime.

Table 1 below lists the six major economies by GDP, noting overall COVID-19 incidence since the inception of the virus.

It is immediately clear that the crude total of cases (Row D) says nothing much about real impacts. India, for instance, has a huge number of cases but a much smaller ratio of cases/population than the USA or the UK. Indeed, Britain—with far fewer total cases than India—has a disastrous statistical record: the largest number of deaths per million and by far the largest ratio of deaths to cases (Row C), often termed the “observed case mortality ratio”, at over 12 per cent compared to Japan’s 1.9 per cent. Germany, usually seen as exemplary in the West, in fact has a much greater case mortality ratio than Japan or India. Things are not quite what they seem when compared to the “spike talk” and abrasiveness of the Western press, in particular.

Table 2 moves towards an interpretation of this data. First, the poorer the nation as measured by per capita purchasing power parity income (that is, World Bank data) the lower the incidence and morbidity of COVID-19. Moving along Row F, India has a per capita income of only 13 per cent of the USA, 15 per cent of Germany's, or 18 per cent of Japan's. Yet the presence of COVID-19 in India, despite headlines of alarm, is far lower.

Rows G and H explain this substantially. In an income-poor nation such as India, the population of youngsters 0-19 years old (G) is very high, at 35.7 per cent, compared to 17.2 per cent in Japan or 17.7 per cent in Germany. As the virus has little impact on the young, this substantially reduces the proportion of the population subject to infection in India. Again, the very low percentage of elderly people (Row H, 6.6 per cent) compared to each of the other five nations is startling. Germany’s 22.2 per cent means that death per capita there should be much higher than in India by a multiple of 3 or 4, as COVID-19  results in mortality among the elderly far more than among younger age groups. Even in China, where Maoist population control reduced births, focused on smaller families and achieved longer survival amongst the elderly, the age differentials based on low income do possibly explain the China's good COVID-19 performance—we do not have to believe Trumpist rhetoric about lying and mischievous Chinese authorities.

The advantages of relative poverty

The other elements of Table 2 that act as advantages for India and China compared to the other four nations centre on much lower urbanism, lower air pollution, and more distant borders (Rows J-M). Row J shows emissions of carbon dioxide, methane, nitrous oxide, perfluorocarbon, hydrofluorocarbon and sulphur hexafluoride per capita in metric tons. The combination of high air contamination with very high degrees of urban living in the richer of the six nations is a possibly potent factor in transmission and severity of the virus, although research on this is ongoing.  Again, in the poorer large nations, the table shows long borders, but these are distant from urban centres and sparsely populated in the main. In contrast, the USA has considerable borders in dense settlement regions adjacent to other high-COVID-19 nations—Canada with 3,479 cases per million, Mexico with its 4,372 cases per million.

The life expectancy results in Row P spell out the effects of low income and low health expenditures—Indian life expectancy being 15 years and more below that of Japan. So, while the lack of health funding in the low-income nations (with Row N showing USA spending 20 times as much and 4 times the proportion of its GDP, in comparison to India) is a depressing global fact, it is not sufficient to raise infection or morbidity levels of COVID-19 in comparison to those of the rich nations of this group.

Table 3 below turns to the likely economic impacts of COVID-19 following our overall analysis.

The biggest factor in recovery will probably be the extent of COVID-19 spread. Thus, Japan and the UK have almost identical incomes per capita, (Table 3, Row Q) but Japan has a far lower incidence of COVID-19 (Table 1, Rows A-C), less than one-quarter of British cases, a tiny fraction of its observed case fatality ratio. We can expect an easier Japanese recovery. On the other hand, generalising across the board, several other factors are involved in any economic forecasts, as suggested in Table 3.

Row T shows different rates of GDP in the six nations in post-recession years, and, other things being equal, the fast-growing China and India have a better running start on recovery. Their lower levels of national debt (Row R) means that they might have more public-funding slack—that is, growth will reduce debts from “recovery spending. At the same time, these two nations have a greater opportunity to borrow public funds through increasing their national debts.

In contrast, Japan has a very high existing national debt (R) but low COVID-19 presence, so might be able to trade her way out of imminent funding problems—Row S, showing that, as with Germany, Japan has a surplus on her export-import trade balance (e+i%).

Trade will be crucial. Row Y shows a high mutual dependency on trade in this group—the calculation here shows the number of the six nations listed as within the top four importing/exporting nations of the nation concerned; a figure of 0 would indicate minimum dependency, a figure of 4 the maximum. The figures of 2 and 3 throughout this row, therefore, show a high dependency of trade within the group—severe trade failure as a result of slow COVID-19 recovery in any members will demonstrably impact on the others. So, the large nations, in a pessimistic scenario, could well lead the rest of the world into further economic recession through a fall in their trading activity outside the group.

This is highlighted when we focus on the US and China as trading nations, bearing in mind that the total Chinese economy is growing much faster than that of the US (Row T). In 52 of 64 major economies globally, China is ranked in the top 4 as an exporter or importer to them. In 33 cases China is the major origin of their imports. China imports 10 per cent less than it exports, and has been growing very rapidly for some time. In contrast, the USA has a smaller world impact, trading disproportionately across her own borders with Canada and Mexico, or with China and Japan. The USA imports 20 per cent more than it exports, and its GDP has been growing at a rate of around 30 per cent of that of China. Crucially, the proportion of Chinese imports that go to poorer, non-industrial nations is around twice that of the USA. We may conclude that although severe trade decline would affect all nations, severe Chinese decline would be very serious for a much greater array of nations, and especially so for poorer or developing countries.

Finally, the political dimension can only be surmised. Rows W, X, and Z provide something approaching a measure of a comparative political economy for the six nations. The HDI, or human development index, of the United Nations incorporates life expectancy, education and incomes, and Row X adds the degree of income inequality between nations—the lower the figure the greater the equality. India suffers badly here from its low HDI position, which would hamper longer-term recovery from COVID-19. Surprisingly, given the range of political systems in this group, levels of equality/inequality are nothing to boast about but are relatively similar. So, these nations would have difficulty driving forward economic recovery programs that dampened the high levels of HDI, and at the same time—as shown in Row Z—they have very strong positions of political and economic freedom as measured by Freedom House earlier in 2020. As indicated by “*”, all nations other than China are defined as “electoral democracies,” with Germany and Japan leading in this regard. China is the odd nation out.

The conclusion is awkward. This immensely influential portion of our COVID-19 world has suffered more than average from the virus, has managed this in very varied ways, mostly problematic, and is economically highly interrelated.

The US recovery is likely to be slow and hard to predict, in that it suffers hugely from COVID-19, has a low rate of economic growth, and, as Rows X and Z of Table 3 suggest, Freedom House has reason to identify the USA as leading a decline in liberal democracy and the “functioning of government, freedom of expression and belief, and rule of law.” This judgement was made just prior to the COVID-19 outbreak.

India might well be a contrast, with a faster recovery due to lower COVID-19 impacts and advantages stemming from all the elements listed in Table 2. A speedy recovery in China together with reasonable growth in India could be the leading optimistic combination—they both have fast rates of growth in the recent COVID-19 past, and they are complementary traders. China, in particular, impacts a wider range of less-developed nations than does the US or the other Big Six nations. In addition, China has political room to move—no electorate complaining of declining democracy, a very low degree of political freedom as defined by Freedom House, (Row Z), so an ability to push through determined programs for recovery and open trade.

Finally, in this very complex situation, we might find that the US-China trade war changes in tone, from a simple dualism to a general division between US pressure for global protectionism and a Chinese insistence on global free trading.

Professor Ian Inkster is a global historian and political economist at SOAS, University of London, who has taught and researched at universities in Britain, Australia, Taiwan and Japan. He is the author of 13 books on Asian and global dynamics with a particular focus on industrial and technological development, and the editor of History of Technology since 2000. Forthcoming books are Distraction Capitalism: The World Since 1971, and Invasive Technology and Indigenous Frontiers. Case Studies of Accelerated Change in History, with David Pretel. Follow him on Twitter at @inksterian.