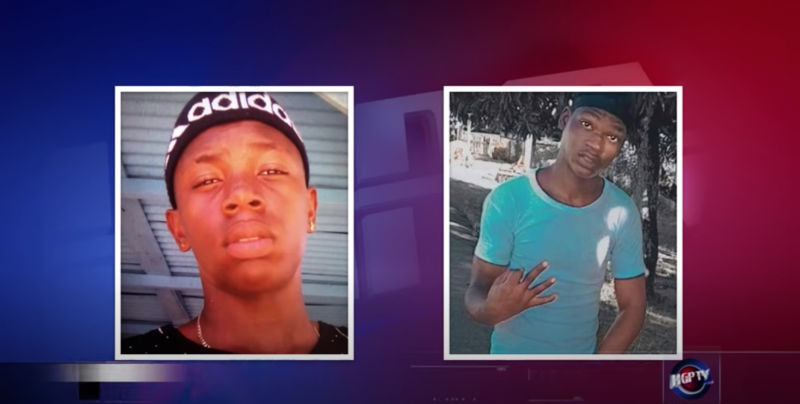 The two cousins, Joel and Isaiah Henry, who were killed in a brutal attack on September 6, in the community of Cotton Tree, located southeast of Georgetown, Guyana, on the west bank of the Berbice River. Screenshot taken from a news report posted to YouTube by HGPTV.

Like many other regional territories, Guyana's politics have historically been race-based — a reality that was on display during the country's recent election impasse, in which the incumbent government, predominantly appealing to Afro-Guyanese voters, was accused of trying to rig the results in its favour.

Although the dust has settled and the opposition People's Progressive Party (PPP), which has a primarily Indo-Guyanese support base, has taken office, many pressing issues are still being painted with the broad brush of race — from the arrest of Clairmont Mingo, the election officer accused of fraud in the election process to the gruesome murder of two Black youth who were found chopped to death on September 6.

Joel and Isaiah Henry, who were cousins, were allegedly killed by an Indo-Guyanese farm owner whose coconuts they were picking. Seven people have since been arrested. Ever since the details of the double murder have come to light, villagers from the boys’ community have been calling for justice and staging protests by blocking roads and setting debris on fire.

Guyana's home affairs minister, Robeson Benn, criticised statements from “leading political persons” and “agitators” who were alluding that the attack on the boys was racially motivated.

By September 8, several civil society groups noted that the killings have exacerbated the country's already charged political race relations, and called on the Ethnic Relations Commission (ERC), which works in the interest of racial harmony and justice, to help ease mounting racial tensions.

Pointing to “the mental racial violence that is being perpetrated on social media,” the International Decade for People of African Descent Assembly-Guyana (IDPADA-G), established under the previous administration under the auspices of the United Nations Decade for People of African Descent, called the murders “another manifestation of the festering division, ethnic strife and utter contempt for the lives of those from other ethnic groups.”

The Society for African Guyanese Empowerment (SAGE) put a political and racial spin on the murders, saying the attack emphasised “the need to rally and defend African Guyanese against aggression by the newly installed PPP government.”

The very next day, September 9, Haresh Singh, the 17-year-old grandson of one of the murder suspects, also died after being found with head injuries and chop wounds.

In a separate incident, Chatterpaul Harripaul, 34, fired his shotgun toward a crowd of protestors, who retaliated by beating him to death.

The country's newly installed president, Dr. Irfaan Ali, has called all four deaths “barbaric” and said the violent protests had “nothing to do with standing up for justice.”

The opposition's politicisation of the issue, according to Home Affairs Minister Benn, is exacerbating the situation with the protests and compromising security in the area of West Berbice, where most of the unrest is taking place.

Meanwhile, organisations like the Muslim Youth Organisation of Guyana (MYO) have spoken out against the murders, and the Guyana Human Rights Association (GHRA) has approached the country's United Nations resident coordinator to ask that international forensic experts help with the murder investigations.

The acrimony that has come to the surface after the double murder and its resultant revenge killings is uncomfortably reminiscent of the country's history of race-based violence.

In a statement, the Guyana Human Rights Association (GHRA) noted that “the prevailing poisonous political atmosphere has penetrated the society to the point where public trust in an impartial investigation is virtually non-existent.”

In calling for racial reconciliation, the GHRA made the point that “both sides are quick to see [the murders] as a continuation of earlier ethnic upheavals” and that the country's “electoral saga […] precipitated this tragic event.”

Guyana, perched on the edge of a major economic windfall thanks to the discovery of oil and gas reserves, cannot afford the kind of racially motivated violence it saw in the 1960s when the United States played an active role in keeping Indo-Guyanese politician Cheddi Jagan, who had Marxist leanings, out of office. Hundreds of people were killed and many who were spared fled the country, resulting in a massive brain drain, economic and social instability.

The mushrooming tensions between the country's two main ethnic groups intensified under the rule of the People’s National Congress, led by Forbes Burnham from 1964 until his death in 1985. Burnham often used state-sanctioned violence to quell dissent, the most infamous example of which was the murder of Black political activist Walter Rodney, although Indo-Guyanese routinely experienced discrimination during his tenure.

Racial tensions once more resulted in violence in the early 2000s when 400-plus citizens, most of them Black, died at the hands of criminal gangs linked to the two main political parties and allegedly supported by security forces.