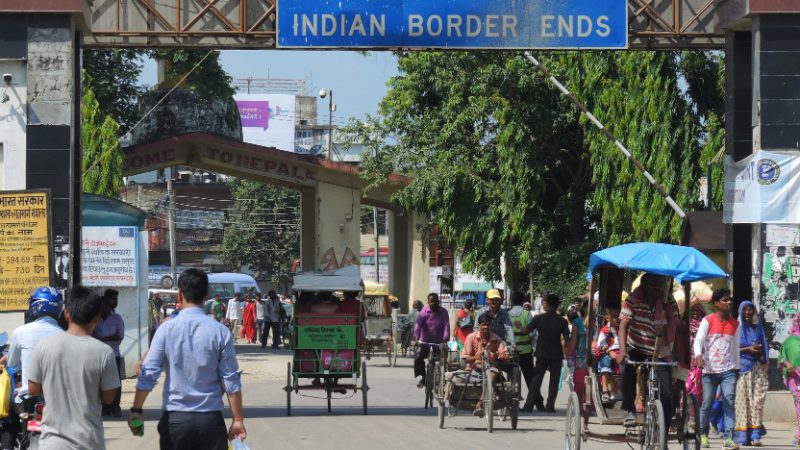 India-Nepal border at Sonauli. Image via Flickr by Axel Drainville. CC BY 2.0.

Bound by cultural ties and religion, the once-friendly India-Nepal ties have significantly deteriorated in the past 10 months after a series of spats over a decades-old border dispute and rising China influence in the region.

Relations began to turn sour in November 2019 when India published a revised map that included territories in Kalapani, Lipulekh, and Limpiyadhura, which both countries claim.

That dispute dates back to the Sugauli Treaty that followed the Anglo-Nepal War (1814-1816), which designates all areas east of Kali River as the nation-state of Nepal. India defends that the Kali river starts at Lipulekh, while Nepal claims Limpiyadhura as its source.

Kathmandu responded by sending a diplomatic note to New Delhi, which the latter ignored. On May 20, the Nepalese government published a new official map of the country incorporating the disputed territories.

Things escalated further in May when India inaugurated a road in the Kalapani area. In June, Nepal amended its constitution to incorporate the country's new map with Limpiyadhura, Lipulekh, and Kalapani. India's Prime Minister Narendra Modi slammed this decision, calling it an “artificial enlargement… not based on historical facts and evidence”.

Nepalese Prime Minister K.P Sharma Oli has been soliciting talks with New Delhi — while at the same time pushing the officialization of Nepal's new map forward.

With support from both Houses of Parliament and the President's approval, the new map incorporating the territories in the Kalapani region is now officially part of Nepal's constitution and its national emblem.

Kathmandu also sent its new political map to the United Nations and Google in June.

Thank you for keeping the dignity of our small nation..we all are looking forward for a peaceful and respectful dialogue between all three great nations now ? https://t.co/A60BZNjgyK

[Quoted tweet by Pradeep Gyawali, Nepalese Minister of Foreign Affairs]: Decision of the Council of Ministers to publish the map of Nepal featuring 7 provinces, 77 districts and 753 local level administrative divisions including Limpiyadhura, Lipulek and Kalapani. The official map is being made public by the Ministry of Land Management soon.)

“It is contrary to the bilateral understanding to resolve the outstanding boundary issues through diplomatic dialogue. Such artificial enlargement of territorial claims will not be accepted by India.”

When Indian TV channel Zee News broadcast, in July, a commentary show accusing PM Oli of having been influenced by the Chinese ambassador, Kathmandu ordered a nationwide ban of all Indian news channels.

India responded by banning all of Nepal's FM radios in the border region, claiming those radio channels were broadcasting propaganda backing Kathmandu's claim to the disputed territories.

In September, Nepal's ambassador to India Nilambar Acharya met Indian national security advisor Ajit Doval to “minimize misunderstanding caused by the recent border row,” which experts have interpreted as a sign that both sides were willing to resolve the issues.

The ongoing friction has put border traders on alert. In Banbasa, an Indian town located at the border, traders have told The Hindustan Times that 80 percent of their businesses depend on Nepali customers. The friction is also worrisome for Nepal, whose 68 percent of all of its exports are destined to India.

In turn, China and India's relations have been at its worst in decades. Border clashes around Ladakh since June has led India to ban 150 Chinese and raised fears of a full-on trade war between the two countries.

In this context, right-wing Indian media, including Swarajya and Republic, accused Nepali officials of revising the country's map to please China. Kathmandu denies those accusations.

Disputes require talks for resolution, and therefore, the sooner India engages in discussion, the better. Nepal also needs to learn from its own mistakes, such as not being well-prepared for talks due to the lack of thorough research, and failure to communicate well.

Neither party is likely to gain from the current deadlock in Nepal-India relations. The present resigned approaches evident on both sides does not contribute to elevating the age-old relations from, perceivably, now at their lowest point in history. If the Indian establishment is testing its strategy of making Nepal realize the putative ‘small country predicament’ in diplomacy, it will have a greater unforeseen cost.

Nepal might have found itself in the crossfire of the China-US trade war and the Indo-China border conflict. It remains to be seen if diplomatic discussions can smoothen frayed ties between those two traditional allies.