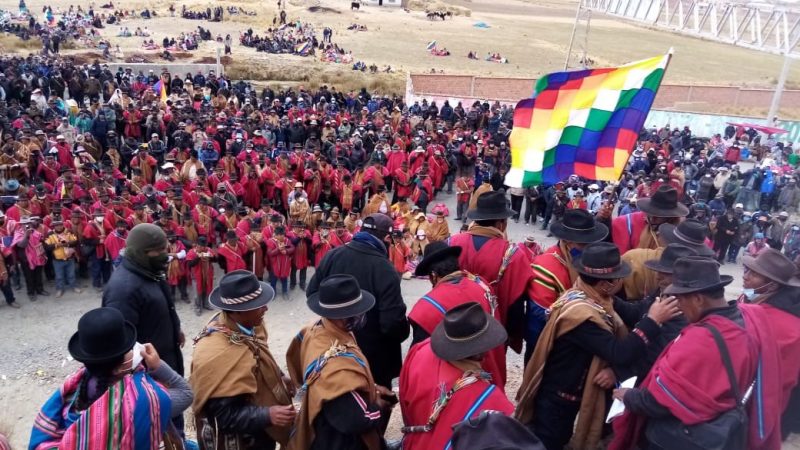 August 6 marked the 195th anniversary of Bolivia's Independence Day; it also drew criticism from indigenous Aymara [1] netizens about alleged corruption [2] in Jeanine Añez's [3] transitional government as well as its neglect of healthcare  [4]and education [5] issues. Many also questioned the relevance of Bolivia's Independence Day for the native peoples of the region.

About 3 million [6] people who identify as Aymara live in four Andean countries: Bolivia, Peru, Chile, and Argentina. In Bolivia, approximately 62.2 percent [7] of the population identify as indigenous.

After independence from colonial Spanish rule, abuse of power [8] against the Aymara and other native peoples continued until the national revolution of 1952 [9] when universal suffrage and agrarian reform, among other rights, were achieved through social struggles. However, inequality and racism [10] against native peoples continue to this day.

Research [11] about Aymara history, technology, agriculture and political organization by Ayamara scholars presents an opposing perspective to the narratives written about the Aymara by non-indigenous scholars. Aymara leaders and teachers continue to assert [12] that Creoles (or non-indigenous people) have hidden or downplayed knowledge derived from the Aymara nation in their own publications about the history of Bolivia. 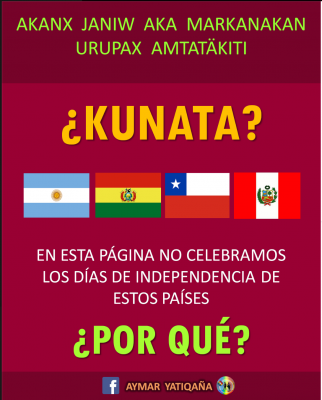 The image reads, “Akanx janiw aka markanakan urupax amtatäkiti ¿KUNATA?” which translates to “On this page, we do not celebrate the Independence Day of these countries. WHY?”. Ajata goes on to say:

Because the independence that is celebrated in these countries does not represent independence for the Aymara. The conditions of exploitation continued or even worsened for us.

Ajata explains that, during the post-colonial period, the Aymara were forced to work as “pongos [14]” (indigenous domestic workers and farmers), they were massacred “at the whim of their masters,” and had to pay “indigenous taxes [8]“. He writes:

The independence of these countries where we, the Aymara, live did not mean our liberation. For us, it was just a change of “master”, from the abuse by the Spanish to the abuse by their descendants.

According to Ajata, Bolivian history lessons glorified Creole leaders like Simón Bolivar [15] and Antonio José de Sucre [16] as liberators; however, the survival of the today's Aymara people was actually thanks to indigenous leaders like Tupak Katari [17], Zarate Willka [18], and Santos Marka T’ula [19]. Simón Bolivar [15], the founder of the republics of Gran Colombia [20] and Bolivia, thought indigenous people  [21]were “…more ignorant than the vile race of the Spaniards.”

Bolivia could not survive without the indians, savages, alteños, masistas…
Did the 195 years of neocolonial republic not teach anything?

The term “Alteño”  refers to the inhabitants of the La Paz adjacent city of El Alto [25]with its majority Aymara and Quechua population. “Masistas” is the name for the followers of Evo Morales’ Movement Towards Socialism [26] party (MAS), which is currently associated with Aymara and Quechua communities who do not agree with the current transitional government of Añez [27]. These terms have been used in the media [28] to refer mainly to the Aymara and Quechuas. Mamani and Quispe believe that Bolivia would not be the same without indigenous peoples.

These are just some of the views that question the idea of “Bolivianity [29]” (“Bolivianidad”) or the condition and sentiment of being Bolivian, which some critics [12] say is oppressive to other cultures within the country.

This criticism of Bolivianity is supported by Aymara social leader and university professor Felipe Quispe Huanca [30], also known as “El Mallku” (“condor of the Andes”). During a television [31]debate, he made strong statements against the political structure of Bolivianity:

I am not Bolivian … I am from Qullasuyu, from the Aymara nation … I have a language, religion, territory, philosophy … I don't like living oppressed.

These words drew criticism [32] from conservative Christian politicians and the media that see him as an “instigator of hatred among Bolivians.” On the other hand, he is supported [33] by many in the native population.

On his private Facebook page, one of the former vice-rectors of the Public University of El Alto (UPEA [34]), Qhisphiyir Qhisphi [35], explained:

There is nothing to celebrate for the 195th anniversary of Bolivia. The massacre and genocide that the invasion brought to these lands 488 years ago, carried out during the colonization, practiced in the republic … and continued by the state. They dare to say “independence”, but there are foreigners ruling with dictatorship and tyranny.