A government official said the website is ‘spreading fake news’. 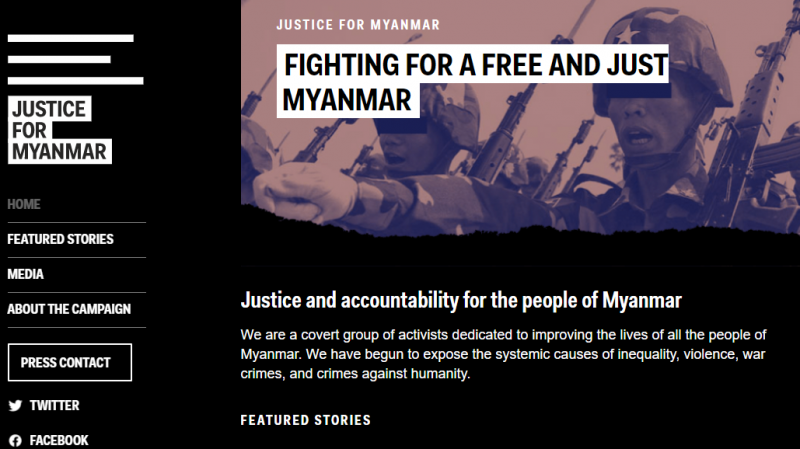 Screenshot of the website homepage of Justice for Myanmar

The Justice for Myanmar website was blocked in Myanmar on August 27 for allegedly spreading ‘fake news’.

The website was launched on April 28 by a ‘covert group of activists’ who vowed to expose the systemic corruption in the Myanmar military.

We have begun to expose the systemic causes of inequality, violence, war crimes, and crimes against humanity.

Justice for Myanmar and its allies are collecting evidence and exposing the vast business network funding brutal oppression in Myanmar.

Myanmar’s military has ruled the country for decades until it was replaced by a civilian government in 2011. The military-backed Union Solidarity and Development Party lost in the 2015 elections but the military is assured of seats in the parliament through a constitutional provision which the junta drafted and approved in 2008.

Some of the website’s recent stories included documents revealing alleged business interests of the children of top military generals and details of military profits from international businesses.

Yadanar Maung, spokesperson of Justice for Myanmar, deplored the blocking of the website:

Our claims are backed up by evidence and we welcome the government to respond to our reports, with evidence. However, instead of engaging in public debate and accountability, the civilian government has chosen repression and is attempting to cover-up the military’s wrongdoing.

Telecommunications operator Telenor Myanmar, a subsidiary of the Norwegian Telenor Group, released a statement protesting the directive issued by the ministry although it didn’t identify the blocked websites.

Telenor Myanmar has complied with the directive under protest.

Telenor Myanmar views this directive with grave concern. Since receiving the directive we have had multiple dialogues with the authorities protesting the blocking. Our position is that freedom of expression and the right of access to information should be respected. We will continue our efforts to lift the blocking and encourage the government of Myanmar to increase transparency for the public.

This is not the first time that the government invoked Section 77 of the Telecommunications Law to block websites. Last March, more than 200 websites were blocked for allegedly spreading ‘fake news’. The list included ethnic media platforms providing news coverage in remote communities.

On how the blocking of the website affected their work, they said:

The blocking creates a challenge for us to fully engage with people within Myanmar. It shows the increased intolerance by the government on freedom of expression and that they are trying to cover up the crimes and corruption of the military. This is absolutely disturbing.

One of their objectives is to pressure international companies to cut financial ties with Myanmar’s military.

We will continue our campaign to dismantle the Myanmar military cartel by exposing their operations and building pressure for international action, including targeted sanctions and divestment. This is essential for Myanmar to achieve federal democracy and a sustainable peace.

They said there are more than 150 international and domestic companies engaged with military-owned businesses in Myanmar.

They are asking solidarity from the international community:

We call on the international community to support freedom of expression in Myanmar and stand up to censorship, not just for the Justice For Myanmar campaign but also ethnic media sites that continue to be blocked, including Karen News, DMG (Development Media Group) and Narinjara.