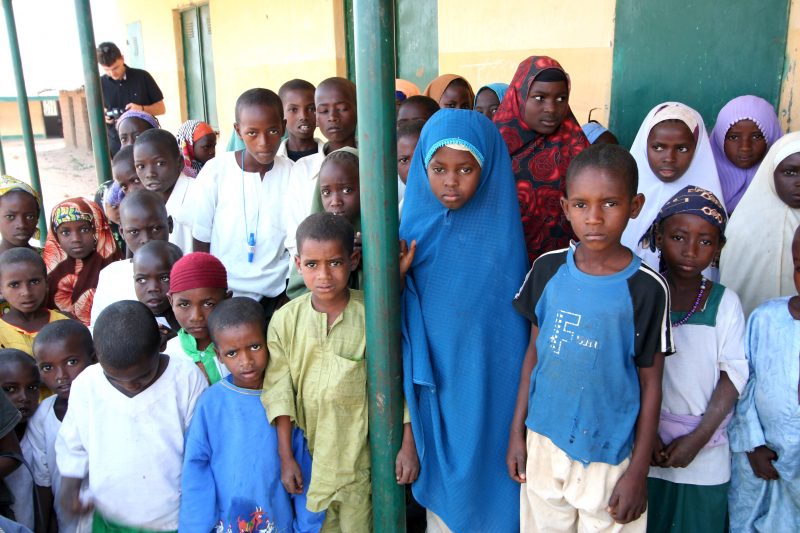 The gunmen who arrived at Damba-Kasaya village in Chikun Local Government Area, Kaduna State, at around 7:45 a.m. on motorbikes first raided the community, where they reportedly killed Benjamin Auta, a farmer, according to Nigerian online newspaper Premium Times.

Happy’s father, Isiaka Odoji,  told Daily Trust, a Nigerian daily, that the gunmen are asking for a ransom of 20 million naira (about $53,000 USD) to set their children free — an amount they cannot possibly afford.

The kidnapped students in the last year of junior secondary school were writing their final examinations. Due to the COVID-19 pandemic, only students in exit classes were allowed to come back to school.

Both the federal and Kaduna state governments have remained silent on the fate of the abducted students and their teacher.

‘It’s a normal day in Nigeria’

Today in Kaduna state, children in exit classes who were told to resume school were kidnapped by armed gunmen. One was reportedly killed. Small boy, his life cut short. The others have been taken away and we may never hear of them again.

This should devastate any nation…

But it is still “a normal day in Nigeria” piqued Twitter user Chima Chigozie:

Jaja blames politics for the absence of public empathy and outrage for the kidnapped school children:

The abducted Kaduna Boys will not get the same support and attention as the Chibok Girls because firstly, they are boys, and secondly, GEJ isn't President.

Goodluck Ebele Jonathan (GEJ) was Nigeria's president when, in April 2014, 276 schoolgirls from a government secondary school were kidnapped by Boko Haram militants from the northeastern town of Chibok. This lead to the global hashtag movement #BringBackOurGirls that resonated with millions of people around the world.

The kidnapping of the Damba-Kasaya school children and their teacher is a grisly deja vu.

The only difference is that this time around, those responsible for this horrendous incident are not Boko Haram — but armed bandits.

The rampaging bandits of Kaduna

ACAPS, an independent humanitarian think tank, asserts that this armed violence is “unconnected to the Boko Haram insurgency in the northeast”:

The banditry violence began as a farmer/herder conflict in 2011 and intensified between 2017 to 2018 to include cattle rustling, kidnapping for ransom, sexual violence and killings. By March 2020, more than 210,000 people have been internally displaced.

Rural communities have been left at the mercy of these bandits who, between January and June this year, have killed at least 1,126 people in northern Nigeria.

Villages in southern Kaduna are the worst hit, with 366 lives lost in the first half of 2020, says Amnesty International.

Chikun LGA, the home of the kidnapped students, had experienced a series of militia attacks that has resulted in the deaths, abduction, “with 45 communities displaced and occupied since 2019,” according to the Southern Kaduna Peoples Union.

The people of southern Kaduna allege that the bandits are Fulani herders, on a land grab mission, with the passive consent of both the federal and state governments.

But Kaduna State governor, Nasir El-Rufai denied that the carnage had anything to do with land grabbing nor any ethnoreligious motivation.

On August 22, the Kaduna State government relaxed the curfew from 6 p.m. to 6 a.m., which was imposed in some parts of the state to curb the banditry.

Nonetheless, Luka Binniyat, spokesman of the Southern Kaduna Peoples Union (SOKAPU) laments that “hunger is also killing us because we cannot go to our farms. Our people are helpless.”