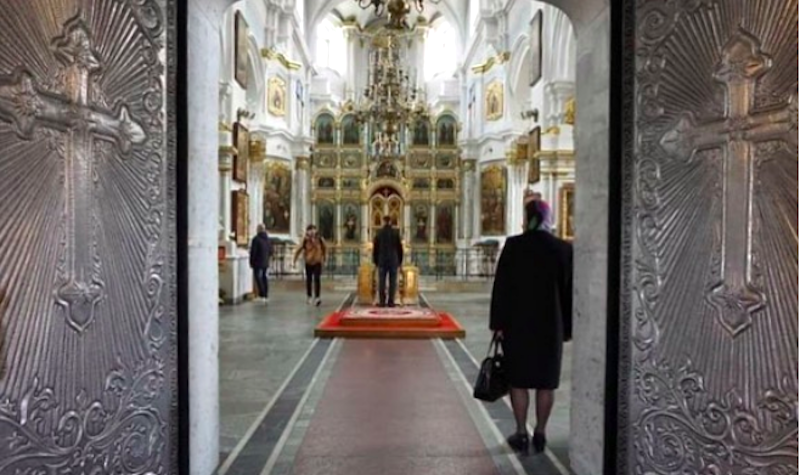 This article originally appeared at BelarusDigest, an independent website providing analysis on Belarusian politics and society. It is republished here with permission, and has been edited for style and brevity.

On August 31, Belarusian border security officers denied a Belarusian citizen, Archbishop Tadeush Kandrusievich, the head of the Catholic Church, return into the country.

Amid displays of solidarity among various civil society leaders in Belarus, the authorities continue to respond with increased pressure. Religious organisations have been no exception in this mostly Orthodox Christian country of ten million.

Over the last few weeks, Kandrusievich has critically spoken out against the brutal crackdown on peaceful protests which took place after the presidential elections of August 9. Demonstrations continue against Alyaksandr Lukashenka, who has ruled Belarus since 1994 and hoped to secure a sixth consecutive term in office.

The archbishop's sentiments have been echoed by other religious leaders in Belarus (Jewish, Christian Orthodox and Protestant). The stance of Metropolitan Paval, head of the Belarusian Orthodox Church, has even cost him his post. With this crackdown on religious civil society leaders, the Belarusian authorities aim to break the chain of solidarity among Belarusians, diminishing their ability to mobilise.

So far the Belarusian Catholic church has reacted in a balanced yet consistent way regarding the developments in the country. On August 15, Archbishop Kandrusievich, appealed to the authorities to resolve the conflict peacefully, emphasising that “people have the right to know the truth” (about the presidential election, whose results are widely believed to be falsified). He also criticised the state for using violence against protesters.

Yet, the Catholic church has unintentionally become more seriously involved in the current political crisis following state forces’ intervention in the Red Church in Minsk, the Belarusian capital. During protests on August 26, OMON riot police blocked the entrance to the church building for nearly 40 minutes, as some of the protesters and journalists were seeking shelter inside. Archbishop Kandrusievich, spoke from abroad about the incident, calling it “unacceptable and unlawful”.

On August 31, in an extraordinary move Kandrusievich, a Belarusian citizen, was denied return to Belarus without explanation. The next day, when visiting Baranavichy, Lukashenka enigmatically accused Archbishop Kandrusievich of “engaging with politics”, “suddenly going on a trip to Warsaw for consultation” and receiving “tasks” to do upon his return to Belarus, despite providing no proof to support this conspiracy theory. [Belarus’ Catholics mostly reside in the Hrodna region in the country's West, bordering Catholic-majority Poland which has had strained relations with the authorities in Minsk – ed.]

The entry ban on Archbishop Kandrusievich has shocked the public in Belarus and many have expressed their outrage towards the state’s decision, with those of all religious affiliations showing their solidarity. The service which took place on September 5 in the Red Church was attended by several thousand people.

In his sermon, Bishop Jury Kasabucki in strong words decried the “persecution of the Catholic Church in Belarus” (around 12 percent of Belarusians are Catholics, according to PEW Report 2017) and prayed for the victims of state violence. “Does opposition to torture equate to going into politics?”, he asked rhetorically.

Changes in the Orthodox Church

The case of Metropolitan Paval is similar – the authorities expect unconditional loyalty from both him as an individual and the Belarusian Orthodox Church (BOC) as a whole, rather than the gestures of solidarity with the victims and critique of torture which the church has demonstrated.

Nevertheless, initially, the BOC has struggled to take a consistent position on the political crisis. While Metropolitan Paval officially congratulated Alyaksandr Lukashenka on his re-election, a couple of days later he spoke in a different tone. He apologised for the “premature reaction”, which, “has caused outrage among many Orthodox believers” in the country.

On August 12, during a meeting with journalists, Metropolitan Paval recognised that Belarusians “are entitled to have their issues but they should not be resolved by resistance”. Most likely, due to further pressure from Belarusian believers and in all probability also from the Orthodox clergy, the Church then spoke out more firmly. On August 15, the synod of the BOC strongly condemned both the harsh reaction of state forces and some incidents of provocation on the part of protesters. Metropolitan Paval then visited a hospital to meet victims of the brutal crackdown.

Soon after this, Metropolitan Paval suddenly stepped down from his post (perhaps with encouragement) and the synod of the Russian Orthodox Church (of which the BOC is part) proceeded to elect his successor – for the first time, a Belarusian, the Bishop of Barisau, Vaniamin.

Despite being new to the role, the new Metropolitan has already passed comment on the developments in the country. On August 26, he appealed to Orthodox believers (some of whom work in the state apparatus system), emphasising the spiritual and moral, rather than political, nature of the conflict. “Changing minds, changing hearts from evil to good, from lies to truth, from division to unity […] — these are the changes that our society needs first”, he stated.

A chain of repentance

Many Protestant Christians have also joined the protests or supported them, and some have subsequently been detained and sentenced. On August 14, Pentecostals and Charismatics officially appealed to the authorities to call a halt to the violence, release all detainees and begin a peaceful dialogue with the people.

Furthermore, members of one Minsk congregation have launched the initiative “From Kurapaty to Akreścina. Never again”, which brought thousands of people onto the street, forming a 15 kilometre chain. Many participants of the event were holding copies of the Bible, crosses, and white-red-white flags [which have become a widespread symbol of protest – ed.] in their hands.

Zmicier Dashkievich, an activist and Protestant, one of the initiators of the chain, emphasised to Belarus Digest that the cause of the current crisis and peoples’ demands are of a mainly moral, not economic nature, unlike those of the 1990s. Belarusians believe their voices have been stolen and thus have demanded to know the truth. According to Dashkievich, churches are the natural institutions to emerge to help resolve the political crisis with no bloodshed and bring spiritual renewal to Belarusian society.

Importantly, both “Kurapaty” and “Akreścina” have already emerged as symbols within the public space and discourse. The former is the site on the outskirts of Minsk which memorialises the most extreme atrocities of the Soviet regime towards Belarusians. Akreścina, on the other hand, is the Minsk-based detention centre, made infamous recently for keeping political prisoners (such as Paval Sieviaryniec from the Belarusian Christian Democracy Party) as well as protesters, often in intimidating conditions.

What can churches do?

Through the crackdown on the Catholic leadership, the authorities have sent out a clear message to all their current and potential critics – whatever your public profile may be, there may be serious consequences for involvement (including the risk of losing your citizenship). Yet, the state aims for more as it hopes to break the chain of solidarity among Belarusians and civil society. And that includes the churches.

In fact, solidarity seems to be the most serious threat to the state apparatus. The authorities, therefore, do not underestimate the role religious organisations can play in society and are counteracting their effectiveness through preventive measures. However, this meddling within the Churches is unlikely to help stabilise the spirit of protest among Belarusians. On the contrary, many, regardless of their denominational affiliation, may find the incident concerning Archbishop Kandrusievich unacceptable and unlawful, which will inevitably trigger further acts and lead to a strengthening of solidarity within civil society.