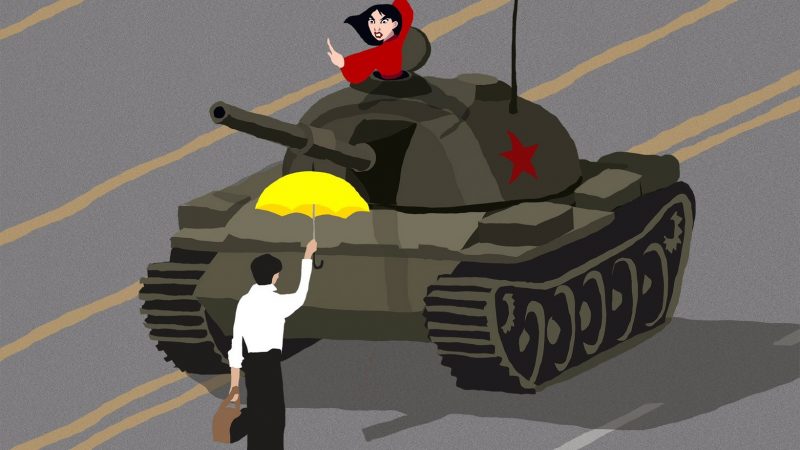 Detail from an image by Badiucao. Used with permission.

Activists from a number of Asian countries are calling for the boycott of the film “Mulan,” released by Disney on September 4, on the grounds that production's lead actor, Liu Yi Fei, has publicly expressed support for the police crackdown on protesters in Hong Kong.

The latest release from Disney, “Mulan” is an adaptation of “The Ballad of Mulan,” a story from Chinese folklore, in which Hua Mulan, an ancient Chinese heroine from AD 386-534, disguises herself as a man so that her ailing aged father would not have to serve in the army.

The action drama, a live-action version of the animated film released by Disney in 1998, was originally scheduled for release in March 2020 but was delayed due to the global outbreak of COVID-19. On September 4 it was released on both the Disney+ streaming service as is also scheduled for theatrical release in regions currently unaffected by the pandemic.

Pro-democracy activists in Hong Kong called publicly for a boycott, with #boycottMulan becoming the most popular hashtag on Hong Kong Twitter on September 5. The boycott soon spread to other Asian countries, including Taiwan and Thailand, members of the newly formed pro-democracy Milk Tea Alliance, a regional netizen network dedicated to counteracting Chinese trolls and nationalist commentators on social media.

Prominent Hong Kong activist and politician Joshua Wong was among the first to call for a boycott:

“Mulan”‘s lead actor Lui Yifei was born in China and emigrated to the U.S in 1997, at the age of 10. She returned back to China in 2002 and began starring in local television dramas.

At the peak of last year's anti-China extradition protests in Hong Kong, Lui shared a graphic on the Weibo social media platform that was shared by China's state-funded People's Daily newspaper. The graphic, posted on August 14, 2019, featured the quote: “I support Hong Kong police. You can beat me now. What a shame for Hong Kong.” Hong Kong activists believe the graphic to be part of a propaganda campaign designed to present an image of protesters as perpetrators of violence, in preparation for the brutal police crackdowns that were to follow. 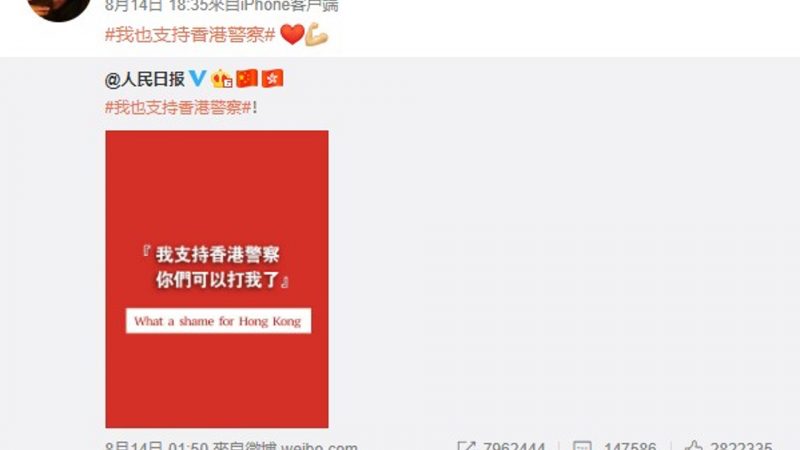 Since Chinese President Xi Jinping placed ideological struggle as at the top of the Chinese Communist Party’s (CCP) top agenda in 2012, in addition to the imposing of heavy censorship on all forms of media, celebrities have been pressured to spread patriotic messages and propaganda on social media. Participating in Chinese state propaganda has become a common path for actors, both Chinese and non-Chinese, who wish to forge successful careers on the large and lucrative Chinese entertainment scene.

The other lead actor in “Mulan”, Donnie Yen, has also projected a pro-Beijing public image on social media. As activist lawyer Kevin Yan noted on Twitter:

Actually Donnie Yen is worse than Liu Yifei. At least Liu can be said to have spent years behind the Great Firewall after returning to China from America for her career. Donnie Yen’s career actually benefited from being in a city that enjoyed artistic freedom. #BoycottMulan https://t.co/G9uMOTXwe3

“I would like to invite everybody to #BoycottMulan, #BanMulan, so that Disney and the Chinese government realize that state violence against the people is something that cannot be accepted.” https://t.co/fexXKFEZe7

A boycott call posted by a community of movie-lovers in Taiwan's Taichung City on September 4 has been shared over 7,500 times. The hashtag #boycottMulan has also been trending in Taiwan over the weekend of September 5.

#BoycottMulan
if u support universal human rights,
if u hate police brutality,
If u believe artists, actors/actresses and companies shall carry social responsibilities,
if u respect Asians and refuse seeing us as money mining market and tokens.

In recent years, global corporations such as Apple, Disney, HSBC and others have been heavily criticized for caving in to unreasonable censorship or political loyalty performance demands by the Chinese government. As JS, an editor at Lausan, an online journal devoted to exploring social movements in Chinese-speaking regions, has pointed out, Chinese government norms not only undermine the value of human rights across civic and business sectors, they also help China reinvent and promote Han-centric ethnic nationalism in the global market:

#BoycottMulan seems like a simple gesture, but its actually really rad. What we're boycotting is the Western commercialization (Disney) of Chinese nationalism / Han supremacy, which points to how intertwined and convoluted the interests of global capital really is.