In Sri Lanka, affected families resist climate of fear on International Day of the Victims of Enforced Disappearances

Many of the events faced restrictions and intimidation 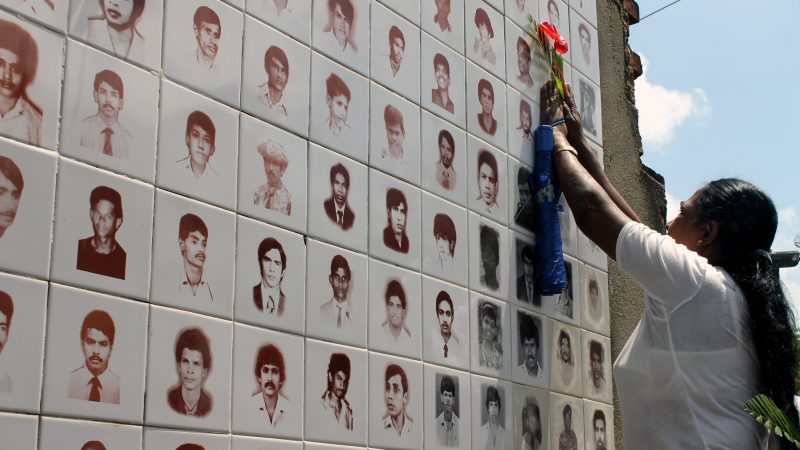 A Sri Lankan woman pays tribute to a relative at the Raddoluwa Missing Persons Memorial in Seeduwa, Western Province, Sri Lanka. Photo from 2013 by Flickr user Vikalpa. CC BY 2.0.

Family members of forcibly disappeared people in Sri Lanka gathered in several cities on August 30 to commemorate the International Day of the Victims of Enforced Disappearances while the government held no official events.

Thousands of people, primarily ethnic Tamils, are believed to have been forcibly disappeared by state actors during the final years of the 1983-2009 civil war that pitted the government against the separatist group Liberation Tigers of Tamil Eelam (LTTE), at a time when Mahinda Rajapaksa was president (2005-2015) and his brother Gotabaya Rajapaksa was the defence secretary.

After a brief opposition rule between 2015-2019, the Rajapaksa brothers were voted back to power as Prime Minister and President, respectively. In the parliamentary elections in 2020, their party Sri Lanka People's Freedom Alliance also obtained a majority of seats.

Gotabaya Rajapaksa has long denied the war crimes allegations made against him, while Mahinda Rajapaksa also denied allegations that he attempted to remain in power by force after he lost the 2015 elections.

Human Rights activist Ruki Fernando reported on the protests and other remembrance activities on August 30 for citizen media outlet Groundviews:

Paangshu, a film highlighting the struggle of a mother looking for her missing son, has been screened in cinemas across Sri Lanka from August. In many cinemas, there were discussions after the screenings.

A moving photo-story capturing the unspoken truth behind enforced disappearances. That the pain of losing loved ones is a lived reality for both Sinhalese and Tamils, for mothers & fathers in the South of #srilanka as much as the North, who still wait in hope. @SRajasegar #lka https://t.co/6ENRINDgft

Some of the events faced restrictions by law enforcement agencies. Ruki Fernando reports:

Many of the events faced restrictions and intimidation. Intelligence agents questioned the priest who hosted the event in Digana. Some families in Jaffna were asked not to join the protest and some bus operators pulled out of transporting them due to intimidation.

Despite efforts by the police to stop them, families of the the disappeared in the East marched to Batticaloa town to mark International Day of the Victims of Enforced Disappearances. #enforceddisappearances #humanrights #humanrightslka #lka #srilanka pic.twitter.com/DymLqHoGBR

An analysis by TED & Ashoka Fellow Sanjana Hattotuwa showed that, while commemorations had good traction on Sri Lankan social media, only a few accounts from politicians engaged with the event:

On #InternationalDayoftheDisappeared, 5 diplomatic accounts & 1 #lka MP tweeted about enforced disappearances. On the face of it, suggests this tragic issue got traction in #srilanka, which is a good thing. Quick snapshot of data suggests things not so roseate. pic.twitter.com/8tKCoze52e

When Maithripala Sirisena defeated Mahinda Rajapaksa in the 2015 elections, a glimmer of hope arose for families of the disappeared.

Sirisena admitted for the first time that 65,000 people were forcibly disappeared during the civil war. He promised to issue a certificate to the families that would allow them to access government welfare programs, as well as manage the property of their missing relatives.

In 2015, the government co-sponsored the landmark UN Human Rights Council Resolution 30/1, vowing to cooperate with the UN to promote reconciliation and accountability in Sri Lanka.

And in 2018, Sirisena created a department, the Office on Missing Persons, that promised to investigate and determine the fate of every disappeared person in Sri Lanka.

Progress was slow but steady until 2019 when the Rajapksa brothers returned to power.

In February 2020, they withdrew from its UN commitments. The brothers also created, according to many human rights groups, a climate of fear for the relatives of the victims, who face threats for making complaints or pursuing justice.

Sri Lankan security forces and intelligence agencies have intensified surveillance and threats against families of victims of enforced disappearance and activists supporting them since Gotabaya Rajapaksa became president in November 2019.

In the past, President Gotabaya Rajapaksa was probed in Sri Lanka for being the “architect of the white van abductions.” In January this year, he stirred fresh outrage after saying, during a meeting with a UN representative, that the thousands missing were “actually dead.”

Minoli De Soysa, the editor of Groundviews, commented on his statement:

But how did they go missing, how did they die? Where is the evidence, where are the records? Can Sri Lanka just dismiss the fate of thousands of its citizens missing from all regions of the country as “actually dead?”

The President's office later said that media coverage of the statement had misquoted him and that what he meant was that investigations had to be conducted before a death certificate could be issued.

Vindhya Buthpitiya, a Sri Lankan expatriate student, tweeted remembering that hardly anyone in Sri Lanka has been held accountable for enforced disappearances, a crime that been committed by multiple ruling regimes throughout the country's history:

enforced disappearances have been pervasively used as an instrument of state terror since 1971 against every community in Sri Lanka, and no one has ever been held accountable. Tens of thousands of Lankans continue to live with irreconciled and irreconcilable loss.