She is the 14th activist to be arrested by the police 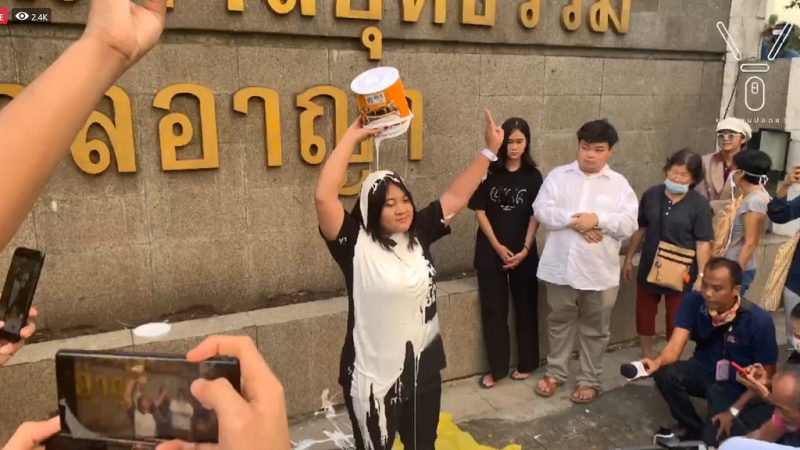 Student leader Jutatip Sirikhan covered herself in white paint in a symbolic act of protest following her release. Photo and caption from Prachatai

Student Union of Thailand (SUT) president Jutatip Sirikhan has been arrested while on the way to university on September 1 for her participation in the July 18 mass protest.

Jutatip was arrested while in a taxi on her way to class at Thammasat University’s Tha Prachan campus in Bangkok. She went live on Facebook at 12:50 pm on September 1 when plainclothes police officers stopped the taxi she was in and delivered an arrest warrant.

Jutatip was taken to Samranrat Police Station. An officer accompanied her in another taxi to the station, since she did not feel safe enough to travel in the private car the officers brought to arrest her. She stayed live on Facebook and read out passages from the Thai translation of Thomas Paine’s Common Sense during the travel to the station.

She was then taken to the Bangkok Criminal Court and was granted bail and released at 5:20 pm in the custody of a lecturer at Thammasat University. The Court did not require her to immediately pay the 100,000 baht (3,190 US dollars) bail but imposed the condition that she does not repeat the actions for which she was being charged – the same condition given to everyone else who has been arrested and released on the same charges.

Jutatip is the 14th activist to be arrested for participating in the July 18 mass protest. Fifteen other participants at the protest have also received a summons and reported to Samranrat Police Station to hear the charges against them on August 28. Jutatip was charged with sedition and violation of the Emergency Decree and the Communicable Diseases Act, among other charges.

Jutatip appeared in front of the Criminal Court after her release and gave a short press conference.

“Paint can be washed out, but we can’t wash out injustice”

I didn’t intend to run away to begin with. I know I have an arrest warrant. I have been waiting to be arrested for a very long time, but it didn’t happen until today. Each time someone gets arrested, there will be slurs against our side that we did not protest peacefully.

There should actually be a summons first, but what happened was that the police brought the arrest warrant and arrested me. It’s extremely unfair to a student. They followed me with my phone signal, followed me from where I’m staying. They threatened my home, they threatened my family, they took a warrant to my house, so now we have to escalate our protest. Everything is supported by the Constitution.

We pay our taxes. We must receive protection from the state, not harassment from the state. So today I have to express myself symbolically that we can do this. We must stand by our rights and freedoms. Throwing paint is also something that can be done.

Jutatip then threw a bucket of white paint over herself while holding up her hand in the three-finger ‘Hunger Games’ salute. She said that the white paint represents purity and justice, and that they are demanding justice back.

Paint can be washed out, but we can’t wash out injustice.

“We won’t stop fighting until we win in everything, including monarchy reform and a new constitution,” Jutatip said.