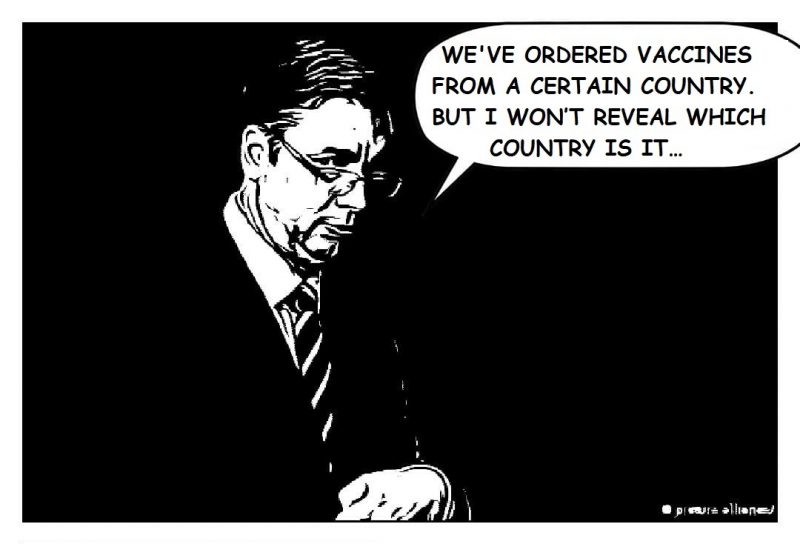 Cartoonist Miloš Dragojević has been using the Facebook page Stripom protiv Diktature (Comics against Dictatorship) to make satirical commentaries on the political situation in Serbia. Several of his latest comics discuss the government’s lack of transparency about the source of vaccines against COVID-19 and the population’s reactions.

In a statement to Global Voices, he explained why he started to produce the digital cartoons:

I started the work on the comics for the page Comics against Dictatorship because I wanted to express my rebellion and disagreement with the situation in my country. At the same time, I wanted as many people as possible to be able to see that expression. I found that satirical comics is an effective way to both ridicule and expose bad developments in society, in particular those perpetrated by politicians.

While at first the Serbian government led by President Aleksandar Vučić downplayed the danger from the pandemic, after elections in June, there was a change in tone and the president took on the role of protector of the people from COVID-19. On July 15, Vučić announced that he is was in contact with a certain country that had already developed a vaccine and that it would be available in Serbia before the end of 2020.

When journalists inquired about which country the vaccine would be imported from, Vučić refused to disclose that information. He would only say that “soon we'll be signing a protocol for cooperation, but I can't tell you the name of the country.”

However, two weeks later the Serbian president announced that he had met with the Ambassador of the People's Republic of China, Chen Bo, and “reiterated his gratitude for the support that Serbia received from China and President Xi Jinping, especially for the help rendered during the coronavirus epidemic,” noting that getting a vaccine was one of the topics of the meeting.

Since the clinical trials necessary for proper testing of vaccines take more than a few months, and can even take years, a large portion of the public was skeptical about the quality of such medical products. This skepticism was reflected in the following cartoon, featuring a caricature of supposed statements by Vučić and Xi. 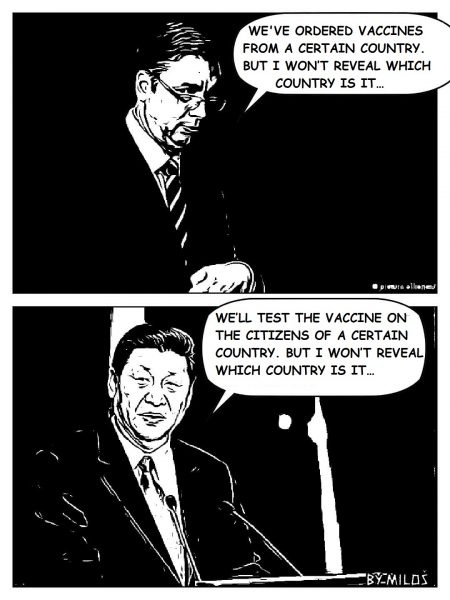 Comics about the supposed use of Chinese COVID-19 vaccines in Serbia by Miloš Dragojević (Stripom Protiv Diktature), used with permission.

On August 11, Russia announced that it had produced a vaccine against COVID-19. Pro-Russian media, politicians and social media users in the Balkans started praising the controversial development, in particular, repeating the announcement that one of Putin's daughters had received the vaccine.

The following comics from August 14 depict the change of position by elderly people, who are considered most susceptible to Russian influence and that of domestic populists who collude with Russia. 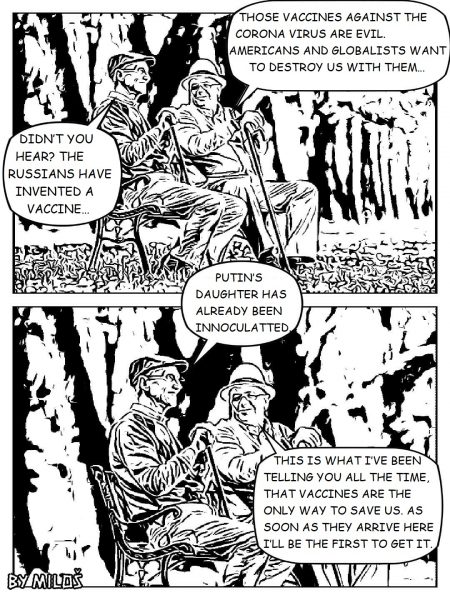 As Putin memes related to the vaccine flooded social media, one group from the Balkans remained uncharacteristically silent—the anti-vaxxers. Macedonian social media influencer Sloboda Jakoski commented on that aspect of the situation via Twitter.

I acknowledge with gladness that some of my anti-vaxxer acquaintances were, in fact, just anti-Western all this time. Thank you, Russia!

In May 2020, the Serbian government announced that all adult citizens were eligible to receive a government grant of 100 euros (about 120 U.S. dollars) in one-off financial assistance. Opposition politicians noted that this redistribution of taxpayers’ money coincided with the continuation of the campaign for snap elections, rescheduled for June 21.

The issue was controversial, with some public personalities announcing they wouldn't take the money, usually saying they already had enough and that the aid should go to people who were more needy. Still, according to statements by government officials, the number of citizens who applied to get the 100 euros (6.2 millon) surpassed the number of citizens living in Serbia, implying that even many living abroad had applied.

The last cartoon by Miloš Dragojević caricatured the overwhelming reversal of positions by ordinary people, with the prospect of a state grant for recipients of the vaccine. 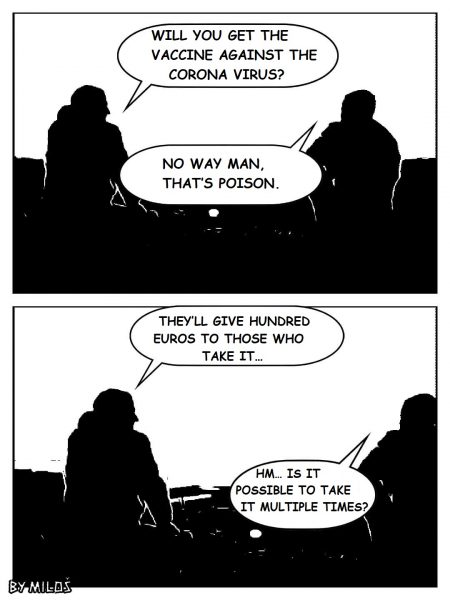 A comment on the U-turn on COVID-19 vaccines when money is involved, by Miloš Dragojević (Stripom Protiv Diktature), used with permission.

Miloš Dragojević spoke further on why he considers his comics activism important:

This work is important to me from personal reasons, as I have a need for people to hear my opinion and positions. I didn't just want to say it plainly, but to come across in a witty and direct way, with a strong but short message. I also have a personal urge to bring awareness to society in some way—to shake the people and make them think on their own, as well as not to buy in to various conspiracy theories promoted by the media and word of mouth. Today, people are confused because of the large amount of different and contradictory information. This is especially notable with regard to the vaccine against the coronavirus. I tried to use my comics to show how easy it is for people to change their positions depending on their own prejudices, which in turn results from the daily exposure to propaganda. I also wanted to denounce the manipulations by politicians, the cheap collecting of political points via this serious issue which, ethically, should not be abused in that way.