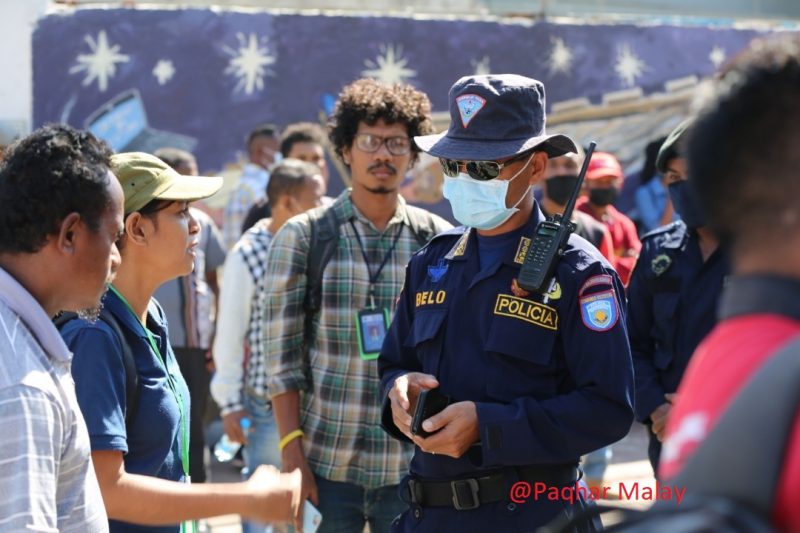 A protest was held on August 3 against the planned revival of the criminal defamation law in Timor Leste. Photo from the Facebook page of Association Journalist Timor Leste (AJTL), used with their permission.

On August 25, a petition was submitted to Timor-Leste’s Minister for the Presidency of the Council of Ministers asking for the rejection of the proposal to restore criminal defamation in the country’s penal laws.

The petition was from the Movement Against the Criminalization of Defamation and Injury (MKKDI) which consists of representatives of civil society organizations, the Timor-Leste Journalist Association (AJTL), the Press Council, academics, and university students.

They were opposing the draft law presented by the Minister of Justice on June 5 reviving the offense of criminal defamation that was removed when the government adopted a new Press Code in 2014.

MKKDI noted in their petition that public consultation about the proposal was done in just one week in June.

This author emailed MKKDI spokesperson Alberico Junior about the petition and got this response:

…the movement thinks that this proposed law is to protect those in power from criticism when they commit any act of corruption and any other acts of crime. We do not want this law to be applied in the country as we do not want to be back to Indonesia's authoritarian regime and Portuguese colonial time, this law is actually the product of colonialists, which was used to ban the Timorese people from criticizing the government at that time.

After receiving submissions from the public about the draft law, the Ministry of Justice announced on July 19 that it removed a provision which would double or triple the penalty for those found guilty of defaming a public official or if this was done through the media, including social media. The provision was removed in response to public criticism that it could be used to stifle free speech.

But the International Federation of Journalists (IFJ) said this claim was misleading because the provision criminalizing defamation is still intact. Jim Nolan, the pro-bono legal counsel of IFJ Asia-Pacific, wrote:

Upon scrutiny, the only ‘concession’ offered by the Ministry of Justice, turns out to be no concession at all. All it achieves is a clumsy attempt to blunt the serious and well-founded criticisms levelled by civil society groups. The substance of these criticisms has been left unanswered by this present proposal.

Jonas Guterres, former advisor to the Office of Commissioner at Anti-Corruption Commission of Timor-Leste warned about the possible impact of the draft law in combating corruption:

…the move by the government of Timor-Leste to criminalize defamation is against the national interest, and will likely undermine efforts to curb corruption, by suppressing to a greater or lesser extent the voices
of whistleblowers and the media. If anything, there is a need instead for anticorruption efforts to be strengthened even further, by enhancing whistleblower protections and asset recovery processes.

On August 11, civil society group La’o Hamutuk met with Timor-Leste President Francisco Guterres. During the meeting, the president reportedly expressed his preference for education, instead of criminalization, in dealing with the issue of defamation. He also added that the draft law is not a priority of the government.

Timor-Leste’s parliament is on recess and will resume its sessions in the second week of September.