Hundreds have died, and over a million find themselves displaced or marooned 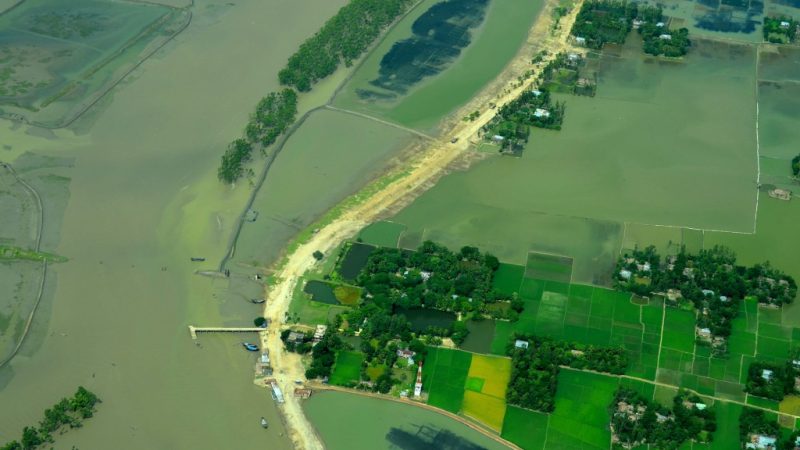 Flood-prone lands at an embankment in Bangladesh. Image from Flickr by Rezwan. Used with permission.

The monsoon season has arrived in South Asia and has already ravaged large swathes of farming and urban areas, leaving millions who were already suffering the effects of the COVID-19 pandemic in financial ruin.

Approximately 10 million people in India, Bangladesh, and Nepal have been affected by monsoon floods in 2020, the worst flooding since 1998. Over 550 people have died as a result, while over a million have been displaced or marooned.

One-third of Bangladesh was underwater after torrential rains caused 53 rivers to overflow in June, when Bangladesh was just beginning to recover from the devastation left by Cyclone Amphan in May.

Expat Bangladeshi M. Jubair Ahmed posted some images of flooding in the southern parts of the country:

Journalist Rafiqul Islam Montu wrote on the GainConnection website that:

Villagers lost their livelihood and have found no work, hence no income. Unemployment is rising. Cyclone affected families are struggling to get their daily food. There is an acute shortage of drinking water as well. The COVID-19 pandemic has made things worse, as relief supplies are affected. The west coast of Bangladesh is facing multiple disasters.

The voluntarily repaired #embankment was washed away by the pressure of the tide. People are floating in the water again. The embankment that collapsed in Cyclone Ampan was repaired at the initiative of the villagers. Picture of the west. #coastofBangladesh.@third_pole pic.twitter.com/EJMgN5qgcp

According to Bangladesh's Ministry of Agriculture, BDT 13.23 billion (US$ 156 million) worth of crops have been damaged, and approximately 257,148 hectares of farmland submerged by floodwaters, affecting over one million farmers.

According to UNICEF, more than 3.3 million people in Bangladesh, among whom 1.3 million are children, have been rendered homeless or are living in hazardous, unsanitary conditions.

The devastation comes at a time when emergency and health services are overwhelmed with responding to the COVID-19 epidemic.

The impact of India's water management

India has built over 5,000 dams and embankments on transnational rivers, with many of these affecting the flow of water o Bangladesh. In the dry season, rivers such as the Teesta are reduced to narrow streams.

When India opens its floodgates during the monsoon season, the added pressure causes erosion on river banks, affecting nearby settlements. Bangladesh has several longstanding issues with India around the sharing of water. The latest agreements signed in 2019 between India and Bangladesh have been met with criticism from Bangladeshi citizens who say the arrangements favor India, which possesses a natural advantage as rivers headwaters are located within its borders.

This year, the United Nations Office for the Coordination of Humanitarian Affairs (OCHA) worked with International Federation of Red Cross and Red Crescent Societies (IFRC) and the Bangladesh Red Crescent Society (BDRCS) to implement a new model of anticipatory humanitarian action that aims to distribute humanitarian aid to potentially affected populations before a disaster strikes.

It's finally happening! They call it #anticipatory #humanitarian #action. Interesting.. but what happened to Disaster Risk Reduction #DRR as a term?
Faster than floods: How to prevent a double disaster in Bangladesh https://t.co/vZt0WQucbi

On July 4, severe flooding was forecast for the approaching weeks along the Jamuna River.

The United Nations promptly released US$ 5.2 million from its Central Emergency Response Fund (CERF) for distribution among the communities most likely to be affected by the floods.

Recipients of the funds can then prepare by purchasing food, medicine, and reinforcing their homes before the flooding occurs.

81179 tube wells were damaged by the on going #floods in #Bangladesh. With the support of @IFRC, @BDRCS1 started to provide tube well disinfection services where the water receded. Families do not need to worry to go other places to collect drinking water.?BDRCS #Jamalpur Branch pic.twitter.com/cl3QaFTyfk

Climate activist Greta Thunberg announced in a July 28 tweet that she will donate 100,000 euros to BRAC, ActionAid Bangladesh, and other humanitarian organizations in Bangladesh and India working in the field:

Right now millions are suffering from extreme flooding fuelled by the climate crisis in India and Bangladesh – already hit by the devastation of cyclone Amphan and COVID-19.
My foundation will donate €100.000 prize money to BRAC, Goonj, Action Aid India- and Bangladesh. 1/3 pic.twitter.com/oOMZ3jrhsV

Since July, Bangladeshi students have been participating in a digital campaign in partnership with Fridays For Future — Bangladesh, the national chapter of Thunberg's climate movement, posting portraits of themselves holding placards with demands and slogans such as “no future under water” and “mother nature shouldn't be drowned.”

For many Bangladeshis, however, such tragedies have become normalized, cyclical events that people endure every year:

“Every time a flood comes, it destroys our house, crops and takes the lives of many. Everything is washed away by the mighty river Padma, leaving us without shelter, food or livelihood. But life goes on.”https://t.co/RyUoCMet45