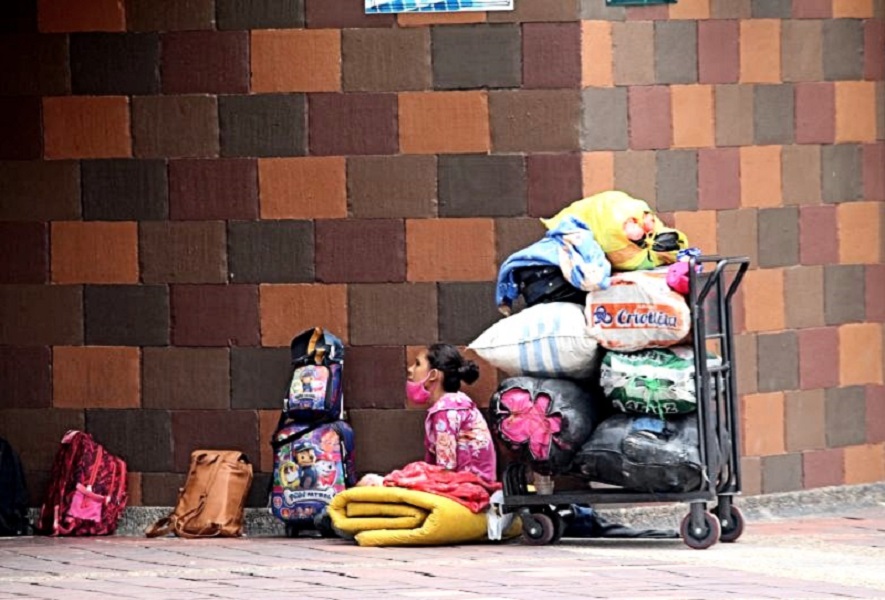 Venezuelan migrant in Colombia waiting for an humanitarian bus to go back home. Photo: Joshua Collins, used with permission.

When the pandemic began in March 2020, Deisi had been living in Ecuador for four months. With $100 US dollars in her pocket, she arrived with her husband and her two children, and quickly found a job selling juice on the street. Her husband became a plumber, and both salaries allowed them to rent a room in a poor sector in the south of Quito. But three weeks after the first COVID-19 case was detected in Ecuador, the country became the epicenter [1] of the pandemic in Latin America. Migrant communities were hit particularly hard [2] as lockdown measures cut their ability to support themselves and their families back home. In a phone interview with Global Voices, Deisi said:

We were evicted out of our room and my whole family was left in the street. We had to roam the streets looking for food and money, afraid of a virus that was crawling everywhere. We just want to go home. If anything happens to us, our children will be left alone. In Venezuela they would be with family willing to take care of them. But we can’t. We’re not allowed inside our own country.

The Venezuelan refugee crisis, which started in 2016, has become the largest in modern history [3], only surpassed by Syria. Venezuelans fled what has been called a complex humanitarian emergency [4] to other countries in the region, most of them battling their own deep social, economic and political crises. This has left Venezuelan migrants across the continent particularly vulnerable in the face of the pandemic [5] as they depend on informal jobs, lack savings, lack social networks, and are exposed to xenophobia. They are also unable or unwilling to access public health systems because of their immigration status.

In Venezuela, President Nicolas Maduro’s government officially declared war [11] against migrants, blaming them for the spread of the virus in Venezuela. During one of his mandatory national broadcasts on July 17th, he said: [11]

They struggled in through trails, these irresponsible and unscrupulous Venezuelans; citizens who come from Colombia and Brazil, and who have contaminated their families and communities (…) We cannot accept them coming in and exposing their families, their own people.

Since the pandemic began, the Venezuelan government has focused on two narratives: “Venezuela is equipped to handle the pandemic” — even though a complex humanitarian emergency has left the country with a broken health system, little access to basic services [12] and food insecurity [13] — and that “the virus is spread by Venezuelans who come from abroad”.

Maduro has gone as far as stating that the Colombian government is purposefully infecting [15] returned migrants with COVID-19 to increase the infection curve in Venezuela. He called it “The Colombian Virus [16].”

No one lets their guard down! We are giving an intense and hard battle against the Coronavirus that I am sure, sooner rather than later, we will win with the conscience and permanent support of our beloved and dear people. Yes you can Venezuela! pic.twitter.com/TwEikUKqgb [17]

NGOs, journalists and international organizations have denounced [19] this new stigmatizing narrative, which refers to returned migrants as “bioweapons [20]”  and “bioterrorists [21]”.

In July, Vice-President Delcy Rodriguez ordered migrants who enter their country through “illegal” paths outside to be detained in El Dorado, one of Venezuela's most violent and overcrowded prisons.

As more than 90,000 [26] migrants have returned, sectors of the society have replicated the government's narrative, using the same hashtags, such as #trocheros [27], and promoting the idea that returned Venezuelan migrants are dangerous criminals and unwanted outsiders who should be punished for getting sick and returning home.

The following tweet, from the official account [28] of the Strategic Operational Command of the Bolivarian National Armed Force, asks Venezuelans to denounce returning Venezuelan migrants. The tweet has been deleted since it was posted.

SHARE FOR THE HEALTH OF OUR PEOPLE AND FAMILY!
If you know someone in your area who has entered the country via pathways, denounce them without anyone knowing it was you.
Send an email with the name of the person, describe how they look if you can and the exact address.

I'm going to make a pedagogic game in risk-related communication:
1 avoid labelling people. a person who uses a trail is not a “trailer”. What I mean is that this condition does not determine their life.
2 avoid playing with labels. No one knows who is infected

In June, the government's criminalization of returned migrants was openly rejected [32] by Venezuela's National Assembly, led by the opposition. They stated that Venezuelans abroad are allowed to return home and asked for effective sanitary controls at the borders so that those who come back can be tested instead of quarantined in shelters. On July 19, Maduro said [33], “…if anyone was offended by any expression that was said, we apologize.”

Since early June, only 300 Venezuelans [34] are allowed through the borders each day, a reduction of 80% in the return of Venezuelan citizens to their country. Once inside Venezuela, returned these migrants face a mandatory quarantine in government-managed shelters. Migrants and journalists denounce overcrowding [35], lack of running water [36], no medical staff to help those who show COVID-19 symptoms or suffer from other diseases, rotten food [37] as well as reprisals [38] from authorities.

Threats to shut the humanitarian corridor [39] between Venezuela and Colombia continue. According to the Colombian government, Venezuelan authorities further restricted [40] the entry of Venezuelans through major avenues, such as the International Bridge Simon Bolivar.

Now, Daisi is living on a farm in Ecuador, far away from the city, working more than 14 hours a day to survive amidst a pandemic that left her and her family exposed:

“If I could go back to Venezuela, I’d hug my family. But it’s a dangerous road back home, and it’s even more dangerous once we get there”.